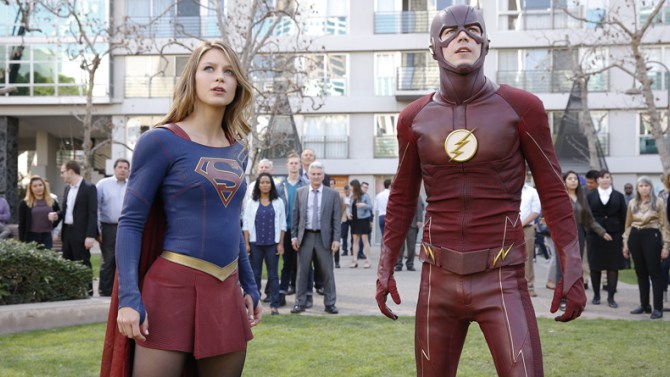 [Television] Flash and Supergirl will get a musical crossover

Lots of big news coming from The CW this afternoon regarding it superhero shows. The latest has Supergirl and The Flash joining forces to sing the villains into submission.

Grant Gustin (The Flash) and Melissa Benoist (Supergirl) were on Glee together, and ever since they shared screen time together during the Supergirl crossover last season, fans have been begging for a musical episode.  Greg Berlanti confirmed that one of the many crossovers between the shows next year will indeed be a musical event.  Berlanti said the show will feature mostly pre-existing songs, but hopes they will be able to pen at least one original song for each episode.  Yup, it’s a two-part crossover musical event!

Why a musical episode?

In Batman: The Brave and the Bold, Neil Patrick Harris played the Music Meister, turning the animated series into a wonderful musical romp.  It makes sense for the producers and writers to try and cram the villain into the show. And of course it would be wonderful if they were able to get NPH to reprise the role he made famous.

How exciting is this!?

But that is not all! All four shows in the CW Arrowverse will see big changes in the coming season.

We’ve already read about The Ray debuting as the first gay superhero to lead series.

Dolph Lundgren is coming to Arrow as a Russian villain in many of the show’s flashbacks.

As previously announced, The Flash season 3 will see Doctor Alchemy as one of the big bads, but we’ll also get to see Savitar giving the speedsters a lot of grief.

Finally, are you ready for Lance Henriksen as Justice Society of America member, Obsidian? I know I am.

Wow! What an incredible day for announcements regarding our favorite superhero television shows! Though I have really liked the surprise reveals made in previous seasons, I’m really excited to know what is coming!