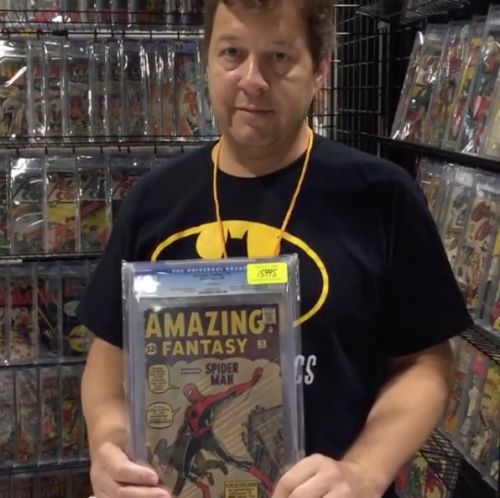 [Business] $85,000 worth of missing comics returned to owner

Last week, at the Tampa Bay Comic Con, Rick Whitelock had $85,000 worth of comics stolen from his booth. Those comics, are now back in the store’s possession, after an anonymous caller returned them as a “mistake”.

Whitelock, owner of New Force Comics in Panama City, reported the stolen box of comics to police on Saturday, when he discovered them missing at the show. The box of comics also contained two CGC graded copies of Amazing Fantasy #15 (the first appearance of Spider-Man). Those comics, graded at 5.0 and 4.0 were priced at $19,995 and $15,995. Many sites reported on the theft, which may have prompted the anonymous phonecall to Whitelock.

He said the man told him he wasn’t sure how he’d ended up with the box containing such rarities as Amazing Fantasy No. 15, Uncanny X-Men No. 1 and Incredible Hulk No. 1, but realized the mistake while later unloading his own boxes after the convention. Whitelock told police the man said it was possible he or a helper had picked up the wrong box.

The story makes it sound like another vendor picked up the box, but interestingly, one of the cases for Amazing Fantasy were cracked, which sounds like someone was trying to crack the case for resale, before realizing everyone on the planet was on the lookout for the collection.

Whitelock had tried to get Mr. Anonymous to drop the comics off at a couple of different locations, but those solutions were refused. Obviously, this person knew more about the legal aspects of being in possession of stolen goods than the average person on the street. The anonymous caller returned the comics on Wednesday via FedEx, which had to be a huge shipping fee.