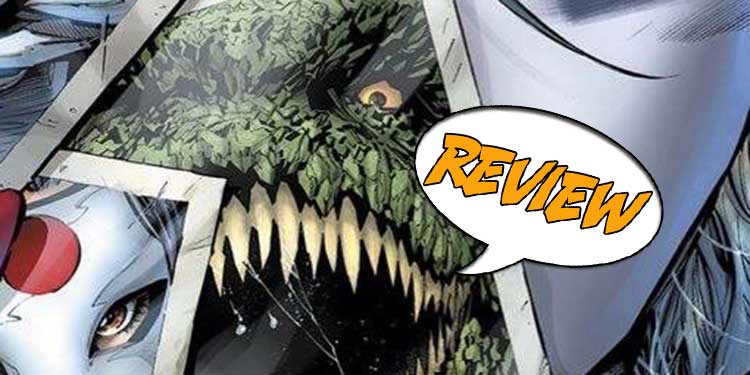 The story opens with the Director of Task Force X, Amanda Waller, getting chewed out by an unnamed-but-obvious Obama-type Presidential figure who proclaims that he is putting an end to the titular band of bad guys. This exchange succeeds in establishing the concept of the Suicide Squad and their unique role in the DC universe, which is helpful for new readers who may have picked up this issue in anticipation of the team’s upcoming big-screen debut. Rob Williams does great work with Amanda Waller as far as how she handles herself throughout the opening sequence. She is able to not only talk down the President of the United States, but get him back on her side through a narrative that shows just how well she is able to throw her weight around. That same prowess is on display when Waller recruits Rick Flag to lead the Suicide Squad in exchange for his release from Guantanamo Bay. On that note, I like that Williams chose to incorporate actual government figures and facilities in the issue as it added a sense of realness to the story. However, that grounded feeling was soon thrown out the window as the story progressed. The idea that a scientist, Mark Ljungberg, was forced to create a meta-bomb that not only grants superhuman abilities to the Dogra War’s criminal army for 36 hours, but also depowers any supers that happen to be within the blast radius is convoluted at best.

Regardless of that minor nitpick, I think the dynamic of the team was fleshed out well in this sequence. Captain Boomerang severing Ljungberg’s hands to ensure the meta-bomb didn’t make it into the hands of the Dogra War and Deadshot subsequently putting a bullet between his eyes so they couldn’t force him to make it again – these moments perfectly epitomize what the Suicide Squad is all about. Their job was to stop the enemy from using Dr. Ljungberg and his meta-bomb for their own nefarious means and questionable methods and dead scientist aside, they did it.

I was surprised that the issue ended with a team consisting only of Harley Quinn, Deadshot, Captain Boomerang and Rick Flag. The Rebirth one-shots should set up the status quo of the series and including the likes of Killer Croc and Katana on the cover but not in the issue itself makes me feel like something is missing. This could also cause confusion for new readers who pick up the issue because of the movie. It’s not really a flaw with the story but given the hype surrounding Rebirth and the Suicide Squad film, ending this issue with only a fraction of the team assembled seems like a bit of a missed opportunity.

The pencils in this book are provided by Philip Tan. Tan has a Bachelor’s Degree in Architecture, which is evident when you see the level of detail he puts into each and every panel. At times, though, it feels like Tan might have gotten a little trigger-happy. When we see the close-up of Rick Flag as he’s sitting in his jail cell, there’s way too much going on in terms of quick line work and this is exacerbated by the fact that there are three different Inkers on the book. Jonathan Glapion, Scott Hanna and Sandu Florea are talented individuals but too many cooks in the kitchen resulted in some rough imagery. I’m not crazy about some of the character designs, particularly Captain Boomerang and Deadshot. Captain Boomerang looks too animalistic in some panels while Deadshot’s armor evokes nostalgic memories of Lord Zedd from the Mighty Morphin Power Rangers, which isn’t necessarily a look that screams ‘deadly marksman-assassin’. Some of the blame can likely be attributed to editorial input but regardless, these things stuck out like a sore thumb when I was going through the issue.

As far as colors go, Alex Sinclair rarely disappoints and this issue is no exception. The twilight shining through the windows of the oval office creates an alluring feeling of the calm before the storm. During the action sequences, the bright greens and reds are ever so softly muted to create a beautiful hue that help keep things from feeling too overwhelming while still managing to pop off the page. All in all, Sinclair’s colors managed to make up for a lot of the more questionable artistic decisions in the book.

While it’s certainly not a game-changer, Suicide Squad Rebirth #1 is a good read with plenty of fun moments and lots of action. Rob Williams fully captures the team dynamic and has a solid understanding of what the Suicide Squad is all about. The art isn’t quite what I was hoping for but an excellent array of colors by Alex Sinclair helps to alleviate some of the pain points I came across.

While it’s certainly not a game-changer, Suicide Squad Rebirth #1 is a good read with plenty of fun moments and lots of action.