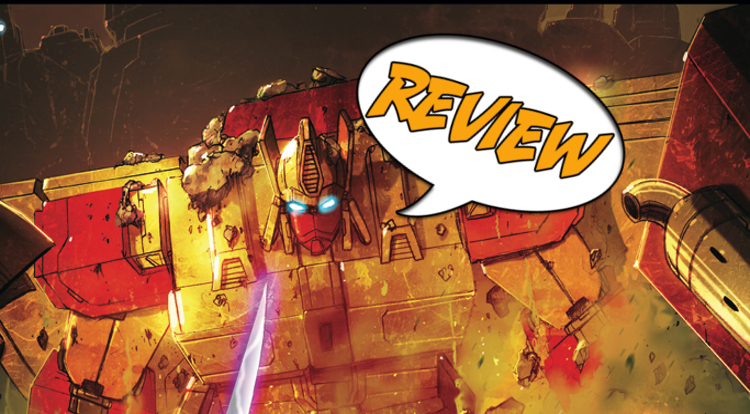 The Combiner Wars have ended.  So what comes next?  Titans Return!  An epic property wide event bringing back the massive Titan Transformers as well as Headmasters (now Titan Masters).  It all starts here in the Transformers: Titans Return one-shot and Major Spoilers has your review! Previously in Transformers:  Starscream has become the ruler of Cybertron in post-war time.  On Earth, Optimus Prime has raised a Titan (a massive city bot) and made it Cybertron’s embassy.  Megatron is an Autobot and has renounced violence.  Any questions?

This is the kickoff to Titans Return, a story that will reach through all three of the Transformers comics and into the toys as well.  It’s a bit like what people in the corporate world call synergy.  While it’s impressive to see Hasbro and IDW working together to unify the Transformers brand, it also gave me some pause.  Could a story made to tie in with the toys be that great?  The answer so far is: Yes. Absolutely.

Transformers: Titans Return starts off by giving the reader a perfect summary of what has happened in the three sister titles.  It’s brief but is all a new reader will need to jump into this book.  With Mairghread Scott, James Roberts and John Barber all contributing to the story, we get time with all our favorite characters from the books and it helps with never feeling out-of-place.  Characters from different books continue to have the voice that you would expect: More Than Meets the Eye characters are in a humorous scene.  Optimus is still the more aggressive, yet peace wanting Prime.  There are great moments in the book and I particularly liked when the Lost Light crew watch a documentary about Sentinel Prime.  Megatron is of course featured as his old Decepticon self and it was a cool idea to have parts of the documentary end up being false.  It also allows the reader to get more of Sentinel Prime’s back story as he is going to be the villain of this event.

Speaking of Sentinel Prime, he is a total bad@ss and I’ve already fallen in love with him.  He’s clearly been faking his death for years, and now that Optimus has raised a Titan, is coming back to rectify what he sees as some very problematic wrongs.  What’s interesting is that Sentinel is a self-appointed Prime, having used the title to get hold of the Matrix.  Seeing him in action is fun and he proves to be a deadly opponent.  The end reveal is one that any fan following the toy line will see (hint: Headmasters) and I’m excited for more of Sentinel in action.  This is a great start to a crossover event in the Transformers line and something fans should really be excited for.

If any Spoilerite has read my previous reviews of Transformers books with Livio Ramondelli on art, my biggest complaint has been the drab coloring.  Almost as if he was granting my wish (if so, thanks Mr. Ramondelli!) this book is popping with color.  The oranges on Sentinel Prime and skyline shots really brighten things up and make the art look very different from before.  Even the darker scenes have more light and at no point in the issue did I have problems deciphering what was taking place.  The splash page of Sentinel Prime’s reveal is amazing and I love the design of the armor he wears, wings and all.  It does a wonderful job of resembling the toy while also adding something new.  Hasbro (or some 3rd Party company), if you’re listening, please make me an armored version of Sentinel.  Action moments work great and are laid out well.  While Ramondelli’s style won’t sit well with some, it has gotten better over time and this issue is the best I’ve seen of his yet.

BOTTOM LINE:  SURE TO HOOK NEW AND OLD READERS

If there was a time to be a Transformers fan, now is the perfect one.  With the comics and toy line (and soon cartoons) all carrying the same event, there is tons to be excited about.  The Transformers: Titans Return one-shot is perfect to get readers of all kinds hooked.  My hope is that those who find the Titans Return toys cool will check out the comics, and vice versa.  The writing and art team on this issue do a terrific job of setting the story up and introducing readers to what is coming next.  I can’t gush enough about this and even though I’m a GIGANTIC Transformers fan, I’m confident that all readers will enjoy this.  If you’re curious about Transformers comics, this one will prove how great they can be.

This is a terrific kickoff to a line wide event that is great for fans and new readers. A great way to get readers interested in the toys and vice versa.