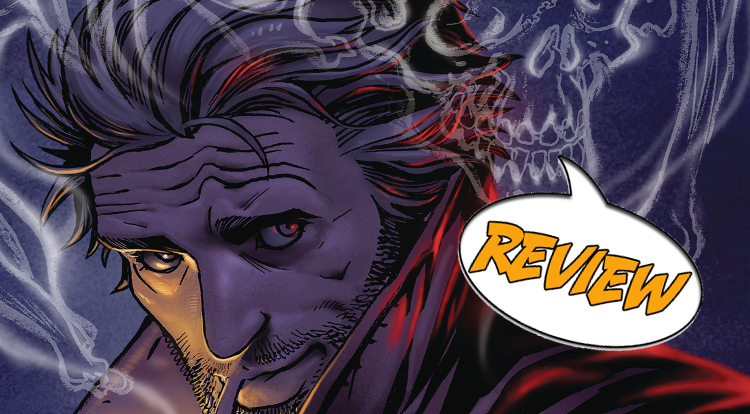 John Constantine is back in the title that launched the character .  He’s back in London, driving around with Chas, and making more enemies than you can shake a cross at.  An average day for good ‘ol Constantine.  Do Simon Oliver and Moritat deliver on the return of one of the old Vertigo books to the new DCU?  Your Major Spoilers review The Hellblazer: Rebirth #1 has the answers.

Previously in The Hellblazer:  New relaunch!!

WHAT’S 8 MILLION LIVES OR SO?

The Hellblazer: Rebirth is DC’s third attempt at “rebirthing” a John Constantine/Hellblazer book.  First it was “Constantine” during the New 52, followed by Constantine: The Hellblazer.  Each had varying degrees of success (depending on who you ask) but nothing ever felt like the original Vertigo work.  This, I’m happy to say, is the closest they’ve come.

Simon Oliver immediately gets to returning to the status quo.  Constantine moves back to London (seems he isn’t a fan of Trump) and reunites with his pal Chas.  There is baggage that comes with naming the book Hellblazer and I’m glad to see Oliver understands and wants to put the character back where he belongs.  But of course Constantine angered a demon (what else is new?) and has a curse placed on him, forbidding him to enter London without becoming a sick, bubbling skin nightmare.  But John Constantine wouldn’t be Constantine if he played by the rules.  A classic Constantine game is played, one that holds the 8 million souls of London on the line, and of course John gets out by the skin of his teeth.  It’s clear Simon Oliver knows what makes the character special, and somewhat unlikable.  The issue harkens back to the Delano era of Hellblazer, with the character Mercury even making an appearance.  Don’t remember who that is?  Don’t worry, I didn’t either and had to look it up.  Luckily new readers shouldn’t be too confused.

Not everything succeeds, especially the appearances by Wonder Woman, Swamp Thing and Shazam.  Constantine just doesn’t work with superheros and Swamp Thing is the only one that fits in with his world.  It’s out-of-place, doesn’t work and Oliver seems aware of it.  “John Constantine has no place among us”  Shazam tells Wonder Woman.  Don’t know if it’s a meta statement or not but it’s certainly true.  Mixing him with the DCU remains problematic because the story can’t reach the maturity of Vertigo.  It reads as a PG-13 remake of the R rated original, which is unavoidable if Constantine is to remain in the DCU proper.  I’ll take it because this is as close as I think we’ll get to the Vertigo Hellblazer for a long time.

Moritat does a good job overall with the art but I have mixed feelings about it.  There are moments of brilliance that I love and others that are downright hard to look at.  The way Moritat depicts the curse visually is awesome.  Seeing the demonic text swirl like red smoke through London was a great idea and is strengthened by the coloring.  Moritat nails Constantine’s expressions and the classic smirk he flashes.  Still, there are times where faces look incredibly strange or crooked.  Wonder Woman’s face has virtually no features minus the eyes, nose and mouth.  It’s bizarre and looks incredibly flat.  Overall, the art works with the story and is a good fit for the title.

The Hellblazer: Rebirth #1 is a great relaunch for the title and brings John Constantine closer to his roots, even if in a toned down fashion.  The original setting, returning characters and classic Constantine games are present which makes it the closest to the original Vertigo run that DC has gotten.  First time readers will find a great introduction into the magician’s twisted world won’t be lost.  Long time readers should enjoy it too, as long as they don’t mind a slightly tamed version of Hellblazer.