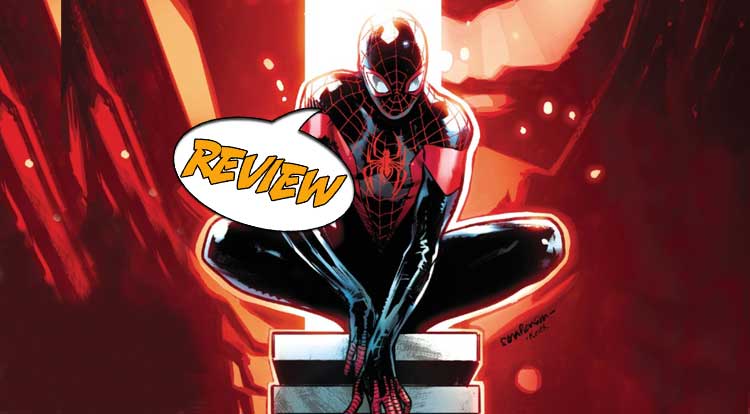 Previously in Spider-Man: “High-schooler Miles Morales was bitten by a stolen, genetically altered spider that granted him incredible arachnid-like powers.  This is a secret he has only share with his best friend Ganke and his father.  Lately, Miles is having a hard tim balancing school and super-heroing, and Ganke hasn’t been helping.  When the famous Ex-X-Man Goldballs enrolled in their school, Ganke spilled Miles’ secret to him…  It did not go well.

Miles mother is also worried about Miles’ new lack of focus and made the mistake of dragging Miles’ hard-talking grandmother into it.  His grandmother decided the family needs to hire a private investigator.  She’s hired Jessica Jones.”

So, stay with me here: Miles Morales, who was created by Bendis, has a new roommate, former X-Man Goldballs (created by Bendis) and is being investigated because of strange behavior by Jessica Jones (ditto) and also head-hunted by Iron Man, currently being written by…  Guess Who?  This isn’t a complaint, mind you, as I really like the way the characters interact throughout the issue, and the big moments (which are, naturally, the trademark Bendis Fast Conversations) work really well.  This issue isn’t big on action moments, instead dealing with interpersonal issues, as Miles and Ganke try to come to terms about Ganke blowing his secret identity, Iron Man makes his case to Spider-Man that Captain Marvel’s use of Ulysses to target pre-crime constitutes profiling, and Ganke is frustrated about being ‘friend-zoned.’  That conversation, by the way, is the one I don’t like, even though Miles handles his part (and his unspoken crush on Ms. Marvel) well…

The biggest issue with the story here is, as with the previous Civil War story, Tony Stark’s utter inability to deal with not being in charge.  Spider-Man outright asks him in whether he keeps using the word “profiling” because he knows Miles is a POC, and it’s a very pointed moment that Iron Man doesn’t quite dispel.  Nico Leon’s art is solid throughout the issue, giving us a good Iron Man, a fabulous Spider-Man and a very TV-inspired Jessica, as well as some excellent, real emotion from Mrs. Morales as she tries to get Jessica to drop her surveillance of her son.  The biggest complaint might be that, aside from some heavy deliberation and discussion, until the last page, wherein Mrs. Morales realizes that Jessica Jones has discovered something about her son…

THE BOTTOM LINE: THE SECRET MAY BE OUT

In short, it’s an issue that works with a lot of different plot points, and does so in interesting ways, but never feels like a complete story so much as a chapter of a larger book, randomly cut up to fit the page count.  Spider-Man #6, thus, shows us the best and the worst of a Bendis-written story, with strong characters, really well-done dialogue and little activity of note, with solid art and possible ramifications in the big parallel crossover story, earning a better than average 3.5 out of 5 stars overall.  I’d like it better if each issue felt like a fully-rendered story, but that train has long since sailed, and Miles and his supporting cast at least make it mostly worth the time to listen to their extended digressions…

Mostly supportive of the crossover story, but at least we get some interesting interpersonal moments for everyone... (I could have done without the 'Friend Zone' rant, though.)