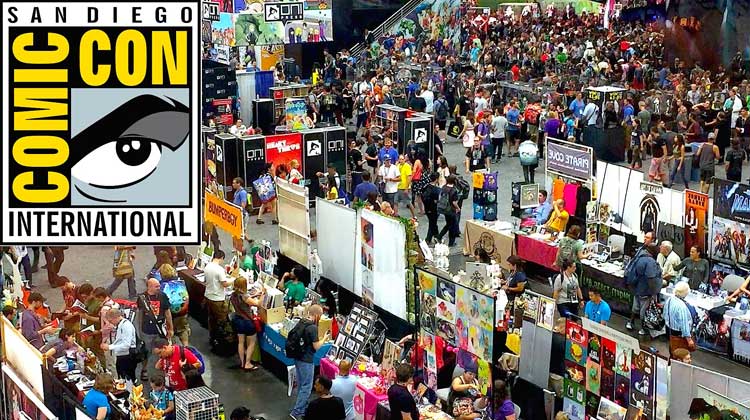 Another San Diego Comic-Con has come and gone, and there’s been a TON of news! I always like to point out that media outlets will be catching up with everything that happened for at least the next month or so, so I recommend patience. To check out news from SDCC, you can still click on the button in the right-hand column of the site that has the SDCC logo that says, “Major Spoilers Coverage Here.”

With the Internet providing instant contact for information, it’s given those of us who are fans the chance to express our opinions in a hyper-quick time period, often as soon as the news has been posted.

Is that a good thing? One example of this being not quite as healthy, I think, was when actor Ben Affleck was chosen to play Batman.

The actor was warned NOT to go on the Internet for at least a month or so, and was even given copies of fan reaction to the reaction of others being selected for comics-related roles. He chose to ignore all that, and went to the website where the official announcement was made.

He immediately banned all Internet contact at his home for the foreseeable future. Smart man.

Let’s jump ahead to today, after his appearance in Batman v. Superman: Dawn of Justice. People who saw the movie came down on all sides (I liked it, can’t wait to see the “Ultimate” version, though), but the one thing that MOST people really warmed up to (and apparently liked) is … Affleck as Batman. Many now say he’s the best movie Batman ever!

Go figure. Compare that initial reaction to this weekend’s announcement that the actor will also direct the upcoming Batman solo movie, which was almost universally positive. The opposite side of the coin may be the recent release of Steve Rogers as Captain America #1, in which Cap was revealed to be a supporter of Hydra, even saying, “Hail Hydra!”

The reaction online was swift and mostly negative – at least, from my looking things over. Many creators and fans did come to Nick Spencer’s defense, and I was happy to see that. But making Cap a supporter of Hydra offended many, including those who saw this as a serious slight to the creators of Captain America, who were Jewish. In the Marvel Universe, Hydra is the new Nazi.

I’ve never read this anywhere, but the solution to this whole situation, instead of waiting for the fifth issue, which often happens in this era of trade paperback-itis, appeared in the second book, hitting the stands about a month later.

Was it planned that way? I doubt it, given the fact that trades often have complete or near-complete stories in them. My guess is, and I may be completely wrong here, the reaction to that debut issue was so strong that Marvel quickly reversed course and wrapped that up in a hurry! Again, that’s simply my speculation!

From my perspective, this may be a case of where instant fan reaction was a good thing, giving Marvel a chance to move in a different direction as soon as possible.

I’ve spent some time over the past few days scoping out reaction to news and the like coming out of San Diego Comic-Con, and most of it has been almost entirely positive. But not all.

For instance, what seem to be hits with those of us with Internet access recently include the trailers for Doctor Strange, Wonder Woman (which MajorSpoilers.com Head Honcho Stephen Schleicher said he had watched at least ten times), Justice League, The Flash, Arrow, and Legends of Tomorrow. You can still see all over those videos here at this site. I didn’t see much reaction at all to the trailer for the animated Vixen, one I particularly like, though.

What really caught my attention were the responses to the Star Trek comics and new television show. Overall, the reaction to the new IDW Publishing comics was really strong, and that was well deserved since they do a terrific job with a franchise that has been tough for other companies to manage in the past. Not so much, however, with the newly christened Star Trek: Discovery. Their video was a CGI viewing of the new ship named Discovery (hence the show’s new name) coming out for a trial run. (See the image to the right.) I mean, I’m a vessel guy, love the U.S.S. Defiant from Deep Space Nine in particular, but the rest are still pretty cool. I was at first unimpressed with drawings of the Voyager, which had the nacelles turned down, but they later turned them up, which made me like it more.

Online, Trek fans really didn’t like what the new ship looks like …, at least the ones I came across.

The nacelles (which propel the ship) don’t go up OR down! Instead, they go directly out to the left and right from the lower portion of the ship. You’ve got the round saucer section, a standard in Trek ships, but the bottom looks triangular in shape, resembling the pins worn on the chest of Starfleet officers to indicate which area they work in, later doubling as communication devices.

My reaction was, “Hey, it’s a Trek ship, so maybe it’ll grow on me more later on.” I wasn’t impressed or unhappy with it – it didn’t do anything for me at all.

Wow, the folks I saw online discussing it despised it. I mean, really hated it.

This violent reaction prompted some fans to go out and talk about how Star Trek isn’t really about ships, it’s about the people. Yeah, I get that, but I also want to appreciate the ship and station designs, too.

Maybe it’s going to take time for those of us into Trek to warm up to this new design. We’ll have to wait and see. At least one good thing is that I didn’t see people fussing over the new typeface in the logo. At least, not yet.

All this makes me look at online responses with a grain of salt. Some fans are in the “extreme” realms, called “gushers” or “bashers,” and they are often the most vocal. Most of us fall in between, and that’s where it’s good to have civil discussions about what’s going on.

Speaking of which, were you surprised by the reactions to what was announced during this year’s SDCC? If so, what surprised you? What did you agree with or disagree with? Please put your responses in the space below!