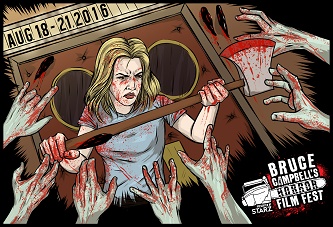 Bruce Campbell’s Horror Film Festival today announced the full lineup for its third annual festivities on August 18-21, in conjunction with Wizard World Chicago. Sponsored by Shudder and Bloody-Disgusting.com, the festival will open with the critically acclaimed nail-biter Don’t Breathe and close with the chilling Siren. Among many other events and screenings, the festival will feature Bruce Campbell’s Last Fan Standing game show, and actress Barbara Crampton as the “Guest of Honor,” who will host a 30th anniversary screening of From Beyond along with her new film, Beyond the Gates.

“You can have your rom-coms, your indie darlings and your blockbusters,” said Bruce Campbell. “I’ll take a good old-fashioned horror movie any day or night of the week!”

Opening night will kick off with the highly anticipated shocker, Don’t Breathe, from director-producer-writer Fede Alvarez (Evil Dead) and produced by Sam Raimi and Rob Tapert. Alvarez and star Stephen Lang (Avatar) will be in attendance. Sony Pictures is set to release Don’t Breathe on August 26, 2016. Closing night will feature the Chicago Premiere of Siren, a feature adaptation of the segment “Amateur Night” from the 2012 critically acclaimed horror anthology “V/H/S”, with director Gregg Bishop and star Chase Williamson in attendance.

The festival will offer Bruce Campbell’s all-new game show, Last Fan Standing—a quiz show based on sci-fi, horror, fantasy, and superheroes. Last Fan Standing is the ultimate test of pop-culture knowledge. Four fans are put through their paces by host and Con-favorite Bruce Campbell, battling through devilish speed rounds and a nerve-wracking Final Confrontation until only one remains, and a Last Fan Standing is crowned. The game show will take place at the Donald E. Stephens Convention Center on Friday at 3 p.m. and Saturday at 11 a.m.

Writer/director Fred Dekker is slated to receive the inaugural “Groovy as Hell” award, and the festival will host a 30th anniversary screening of the cult classic Night of The Creeps and a very special screening of The Monster Squad with actors Andre Gower (Sean) & Ryan Lambert (Rudy) also in attendance.

Benson and Campbell, along with mystery comedians, will riff on the film live from the front row, and say whatever hilarious thoughts that pops into their heads. Single tickets for this show are SOLD OUT, but you can still guarantee a seat with the purchase of a festival badge.

BCHFF is also thrilled to present a 25th anniversary celebration of everyone’s favorite time-traveling metalhead slackers, a screening of Bill & Ted’s Bogus Journey with director Peter Hewitt in attendance, along with Death himself, William Sadler!

The festival will also mark the World Premieres of Found Footage 3D, the long-awaited satirical horror film produced by Kim Henkel (The Texas Chainsaw Massacre) and directed by Steven DeGennaro, and Show Yourself, a haunting & remarkable genre-bending feature debut from Billy Ray Brewton (subject of the wonderful award-winning 2014 documentary Skanks, and programmer for Slamdance Film Festival).

Fans in the region will also experience the Chicago premieres of:

“I could not be any more thrilled with this year’s lineup,” said festival director Josh Goldbloom. “There’s something here for every bloodthirsty horror fanatic: Haunted houses, serial killers, satanic board games, home invasions, monsters with demon wings, possessed guitars, portals to hell, killer clown cookie jars, and last but not least, greasy stranglers. Buy a ticket and I promise you’ll see something you won’t forget.”

Festival badges are $100, and are on sale now at www.bchff.com!

The festival and all screenings will be held at the Carmike Muvico Rosemont 18.

Fans can visit www.BCHFF.com for full details and additions to the slate as they happen and dates and times for each screening. Follow the festival on Twitter: @groovyfest

A quintet of classic movie monsters invades a small town looking for a lost amulet that will help them rule the world. A bunch of kids decide to fight back by forming the “Monster Squad.” Written by Shane Black (THE NICE GUYS, KISS KISS BANG BANG).

NIGHT OF THE CREEPS Fred Dekker in attendance!

The night of the prom becomes the “Night of the Creeps” for a small-town college with a big-time problem! No one ever said college would be easy…Johnny (Ken Heron) and his girlfriend Pam (Alice Cadogan), the perfect co-ed couple, are enjoying Lover’s Lane one evening in 1959 when suddenly Johnny’s attention is diverted to an evil light. He leaves to explore it, never to return again. Twenty-seven years later, when two college boys, Chris (Jason Lively) and J.C. (Steve Marshall), pledge a tempestuous fraternity, they encounter Johnny’s frozen body. When life returns to Johnny’s corpse, a reign of terror begins as the mysterious” creeps” leave his brain, permeating the bodies of other frat boys and sorority girls, making zombies of their prey!

FROM BEYOND Barbara Crampton in attendance!

Obsessive scientist Dr. Pretorius (Ted Sorel) successfully discovers a way to access a parallel universe of pleasure by tapping into the brain’s pineal gland. When he is seemingly killed by forces from this other dimension, his assistant, Dr. Crawford Tillinghast (Jeffrey Combs), is accused of the murder. After psychiatrist Katherine McMichaels (Barbara Crampton) and detective Bubba Brownlee (Ken Foree) take the case, the trio risks a return to the other world in order to solve the mystery. From Master of Horror, Stuart Gordon (Re-Animator)!

Amiable slackers Bill (Alex Winter) and Ted (Keanu Reeves) are once again roped into a fantastical adventure when De Nomolos (Joss Ackland), a villain from the future, sends evil robot duplicates of the two lads to terminate and replace them. The robot doubles actually succeed in killing Bill and Ted, but the two are determined to escape the afterlife, challenging the Grim Reaper (William Sadler) to a series of games in order to return to the land of the living.

A trio of friends break into the house of a wealthy blind man, thinking they’ll get away with the perfect heist. They’re wrong

A bachelor party becomes a savage fight for survival when the groomsmen unwittingly unleash a fabled predator upon the festivities. A feature adaptation of the segment “Amateur Night” from the 2012 horror anthology “V/H/S.”

How do you build a haunted house? Ask the enigmatic Jebediah Crone, the main suspect in a case of stolen rooms where horrific tragedies have occurred.

Hard-drinking, pill-popping, bong-ripping Lou (Natasha Lyonne) and her best friend Sadie (Chloë Sevigny) spend their days adrift in a druggy haze. But one wild night out becomes a bad trip that never ends when Lou wakes up with symptoms of an unexplained, highly abnormal pregnancy. Spiked with blasts of hallucinatory color, surreal shocks, and subversive comedy, the audacious feature debut is a no-holds-barred descent into delirium.

Seven months after their father’s disappearance, two brothers reunite to liquidate the family video store. Unfortunately, things go from bad to worse when they find an old VHS boardgame with evil powers, and all hell breaks loose.

The Los Angeles-set tale follows Ronnie, a man who runs a Disco Walking tour along with his browbeaten son, Brayden. When a sexy, alluring woman comes to take the tour, it begins a competition between father and son for her attentions. It also signals the appearance of an oily, slimy inhuman maniac who stalks the streets at night and strangles the innocent, soon dubbed ‘The Greasy Strangler.’

A young woman struggles to survive on her own in the wake of a mysterious epidemic that has decimated society and forced her deep into the unforgiving wilderness.

I AM NOT A SERIAL KILLER (Chicago Premiere) Guests to be announced!

In a small Midwestern town, a troubled teen with homicidal tendencies must hunt down and destroy a supernatural killer whilst keeping his own inner demons at bay.

Seth works at an animal shelter, and for years has been secretly in love with a waitress named Holly . When he repeatedly fails in his attempts to woo her, he naturally decides to lock her in a cage at the shelter where he works. And that’s just the beginning…

When his friend dies unexpectedly, Travis heads into the woods with his ashes to say goodbye. But as he deals with his grief, and the way it has affected the relationships in his life, he starts to realize that he actually might not be alone.

A metalhead gets passed down a satanic guitar that riffs to shreds.

A recently released criminal is looking for a good time. He can forget his sins but he can never forget…Gwilliam.

I LOVE YOU SO MUCH IT’S KILLING THEM

A pitch-black comedy about Vivian, a lonely serial killer whose three loves in life are math, accounting, and killing random people. This all changes when she meets Alex, the man of her dreams.

A woman wakes up bound to an altar, helpless as she is transformed into a flesh and blood statue of Santa Muerte by two elderly Brujos whose sole purpose is to conjure the anti-Christ into our plane of existence.

NIGHT OF THE SLASHER

A teenage girl must commit horror movie sins such as drink alcohol, do drugs, and have sex to lure a killer and finish him off.

A crusty and recluse superintendent is thrown into the ultimate fight against evil when a couple of cultists open a portal to the ancient and mysical city of R’lyeh, awakening slumbering god. Starring the late “Rowdy” Roddy Piper.