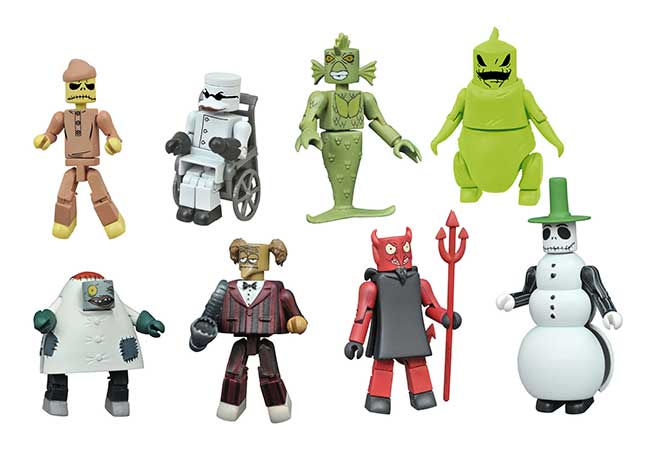 Diamond Select Toys will be at the San Diego Comic-Con this week, and will bring Alice, Doctor Strange, The Muppets, and more!

Alice Through the Looking Glass Select Action Figures Series 1 Asst.
A Diamond Select Toys Release! For the first time ever, DST is offering fully poseable 7” scale action figures based on an Alice in Wonderland movie! These 7-inch figures of Alice Kingsleigh and the young Mad Hatter, based on their appearances in Alice Through the Looking Glass, feature the likenesses of Mia Wasikowska and Johnny Depp, and have up to 16 points of articulation. Each comes with a diorama background depicting a building from Wonderland – connect the bases to build a larger town! Figures are individually packaged in the display-ready Select packaging, with spine artwork for shelf reference. Sculpted by Gentle Giant Studios!
Alice Figure (Item #JUL162616, SRP: $24.99)
Hatter Figure (Item #JUL162617, SRP: $24.99) Batman Classic TV Series Premier Collection Batman Resin Statue
A Diamond Select Toys Release! Holy left cross, Batman! This 12-inch scale resin statue of Adam West as Batman is based on his appearance in the Batman Classic TV Series, and depicts him throwing a massive punch at one of his numerous foes or their underlings. The base for this statue even provides the “POW!!” sound effect that showed up on screen in every fight! Featuring detailed paint applications and limited to only 1,966 pieces, this statue comes packaged with a certificate of authenticity in a full-color box. Sculpted by Clayburn Moore! (Item #JUL162604, SRP: $149.99) Batman TAS Gallery Harley Quinn Man Who Killed Batman PVC Figure
A Diamond Select Toys Release! Who knew Harley Quinn was such a mistress of disguise! In this all-new PVC figure based on Batman: The Animated Series, a suit-wearing Harley Quinn re-applies her make-up after going undercover as a lawyer in the classic episode “The Man Who Killed Batman.” At her feet lies Batman’s cape and cowl, with a “Kick Me” sign stuck to the back. This 9” scale PVC figure features collectible-quality sculpting and paint applications, and is in scale to all Gallery and Femme Fatales PVC figures. Packaged in a full-color window box. Sculpted by Varner Studios! (Item # JUL162607, SRP: $45.00) Justice League Unlimited Animated Green Arrow Resin Bust
A Diamond Select Toys Release! The DC Animated Universe’s greatest archer is now part of the DCAU’s greatest bust line! Joining fellow Justice Leaguers Batman, Superman, Hawkgirl and more, this approximately 6” resin bust of Oliver Queen captures the archer as he appeared in the Justice League Unlimited animated series, taking aim with his bow and arrow atop a pedestal base styled after the JLU‘s Watchtower satellite. Limited to only 3,000 pieces, this bust comes packaged with a certificate of authenticity in a full-color box. Sculpted by Varner Studio. (Item #JUL162605, SRP: $59.99) Justice League Unlimited Green Lantern Figural Metal Bottle Opener
A Diamond Select Toys Release! Let those whose caps are on too tight, call on the power of Green Lantern’s light! Racing home to Earth all the way from Oa, Green Lantern John Stewart is now a 4” sculpted metal bottle opener, ready to assist in the opening of any bottled beverages. Based on his appearance in the Justice League Animated Series, GL will remove a bottle cap almost as fast as you can think about it, and magnets on the back keep it locked to your refrigerator so you don’t have to wait to recharge! Packaged in a full-color slipcase. (Item #JUL162606, SRP: $18.00) Marvel Minimates Series 70 Doctor Strange Movie 2-Pack Asst.
A Diamond Select Toys Release! The next chapter of the Marvel Cinematic Universe is now the next entry in the long-running Marvel Minimates line! Series 70 of Marvel Minimates mini-figures travels to the world of the Doctor Strange movie, with four different two-packs: Dr. Strange with The Ancient One, Mordo with Kaecilius, the specialty-exclusive Stephen Strange with Christine Palmer and the specialty-exclusive Wong & Zealot! Each 2-inch Minimates mini-figure features 14 points of articulation and fully interchangeable parts. Each two-pack is packaged in a full-color window box. (Item #JUL162622, SRP: $9.99)/ea. Marvel Select Odin the Destroyer Action Figure
A Diamond Select Toys Release! Prepare to be destroyed! The next 7-inch-scale Marvel Select action figure is the Destroyer, the massive Asgardian automaton that regularly menaces the Mighty Thor! Measuring approximately 9 inches tall with 16 points of articulation, this spiked powerhouse comes with the powerful Odinsword, as well as an interchangeable head, revealing the one-eyed face of the All-Father, Odin, from the times he has worn the armor in battle! Whether you choose to display him as the Destroyer or as Odin, he’s more than a match for your Marvel Select Thor, or Hulk, or even Juggernaut! Packaged in the display-ready Select packaging, with spine artwork for shelf reference. Sculpted by Jean St. Jean!
(Item #JUL162624, SRP: $24.99) Muppets Select Action Figures Series 3 Asst.
A Diamond Select Toys Release! It makes us very happy to introduce to you the next assortment of Muppets Select action figures from DST! Muppet Show and Up Late star Miss Piggy comes with her precious dog Foo Foo and a Penguin, while Electric Mayhem bassist Floyd Pepper comes with guitarist/love interest Janice, and pianist Rowlf comes with Mahna Mahna and the certifiable Crazy Harry! Each multi-pack of 4-6” figures comes with accessories, including guitars, a movie camera, a detonator and plenty of sheet music! Packaged in display-ready Select packaging, with spine artwork for shelf display. Sculpted by Gentle Giant Studios! (Item #JUL162620, SRP: $24.99)/ea. Muppets Minimates Series 3 2-Packs Asst.
A Diamond Select Toys Release! It’s time for some very special guest stars! The Muppets Minimates line continues with more of your favorite characters from across their history, in four all-new two-packs. Characters include Kermit as Constantine with Patrol Bear Fozzie, Electric Mayhem members Floyd Pepper and Janice, and exclusive two-packs of Mayhem members Zoot and Lips, and Muppet Newsman with Pepe the King Prawn! Each 2-inch Minimates mini-figure features up to 14 points of articulation with fully interchangeable parts and accessories. Make your own Muppets! (Item #JUL162619, SRP: $9.99) Nightmare Before Christmas Minimates Series 4 Counter Display
A Diamond Select Toys Release! It’s a new series of Nightmare Before Christmas Minimates and they’re a dream come true! The cast of creepy characters expands with Igor, Saxophone Player, Undersea Gal, and the Devil, plus Snowman Jack, Glow Finkelstein, Glow Pajama Jack and Glow Oogie Boogie! You can get one of eight different characters in this counter display of 18 individually bagged Minimates. Each 2-inch Minimates mini-figure features up to 14 points of articulation with fully interchangeable parts. (Item #JUL162618, SRP: $5.99)/ea. Plants Vs. Zombie Garden Warfare 2 Select Action Figures Series 1 Asst.
A Diamond Select Toys Release! It’s the revenge of the vegetables! In the sequel to the hit game PvZ: Garden Warfare, the Plants are battling back against the victorious Zombies, and once again DST lets you bring the battle to your own backyard! This new assortment of four multi-packs includes Kernel Corn (with Parrot Pal) vs. Captain Deadbeard (with Butter Assault), Rose (with Debuffed Goat) vs. Captain Brainz (with Electric Lightning Turret), Peashooter (with ToxicShroom Turret) vs. Browncoat Disco Zombie (with Laser Turret), and Weed (with various accessories) vs. Soldier Zombie (with Rocket Turret). Each figure measures approximately 4-6” tall, and features multiple points of articulation, and each Plant-Zombie pair is packaged in display-ready Select packaging, with spine artwork for shelf reference. Sculpted by Oluf W. Hartvigson! (Item #JUL162603, SRP: $24.99)/ea.