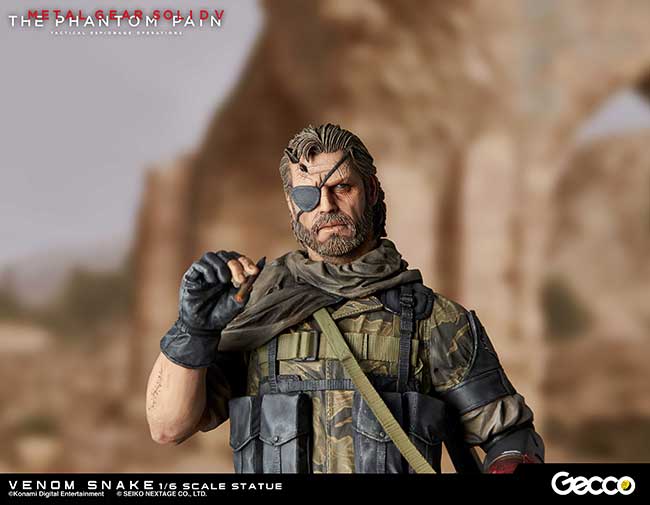 [Statues] Check out this Venom Snake statue from Gecco Corp

The painful scars suffered from XOF attack in the end of “Ground Zeroes” are faithfully sculpted on the face, and the skin texture is very realistic. Furthermore, the paint technique enhances the character’s aging facial expression.

His combat uniform has an amazing amount of details from the subtle wrinkles to the complex camouflage paint pattern. Every detail of this character has been captured faithfully by all artists involved.
The small accessories, such as porches, belts and water bottle, are made by hand whereas the rifle and bionic arm are sharply sculpted by digital.

Venom Snake can be displayed with or without the scarf according to your preference.
The display base is the same stage as the Quiet statue, the Aabe Shifap Ruins.

This is the ultimate Venom Snake statue, combining both his relaxed posture smoking the Phantom Cigar and capturing his tension keenly scanning the environment.

The statue is sculpted by Shinya Yamaoka and has a SRP of $299.00. The statue is available for pre-order now and is expected to arrive in late October 2016.