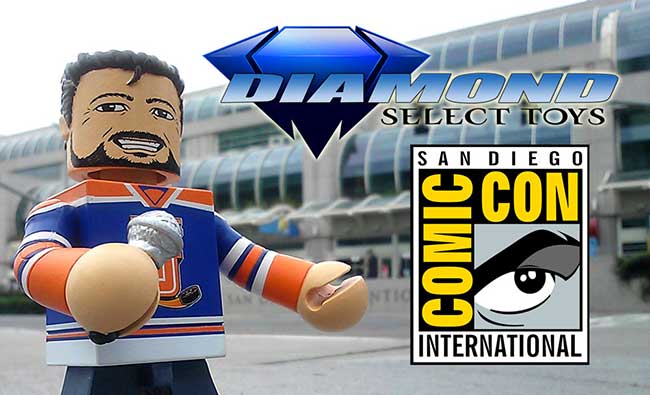 Comic-Con International in San Diego is one of the largest gatherings of toy lovers known to mankind, and every year DST leaps at the chance to interact with their customers at the event, as well as introduce themselves to new fans! This year, DST will be all over Comic-Con, with a booth (#2607) full of prototypes and exclusive toys, two panel presentations that break down our upcoming products, and they are once again taking over Taste & Thirst in the Gaslamp Quarter, turning the popular eatery into a hive of Alien goodness!

On Thursday, July 21, DST will open up their Alien Lounge at 715 4th Avenue (the home of Taste & Thirst on 4th) with a kick-off event from 11 PM to midnight, for ages 21 and up. Alien-themed door prizes will be given out at the kick-off, and the Lounge will be open all weekend, with numerous DST Alien products on display, as well as a photo backdrop featuring Alien Minimates for scary selfies! Stop by for a bite to eat – the chicken wings are to die for – and stay for the xenomorphic atmosphere!

On Saturday, July 23, DST will host the panel “Minimates Mini-Figures: Marvel, TMNT & Beyond” from 1:30 to 2:30 in Room 8 at the convention center. After a slide presentation, DST president Chuck Terceira and prototype painter Brian Felgar will discuss what’s coming up for the long-running 2-inch Minimates mini-figure line and the 4-inch Vinimates vinyl line, including more Aliens, Predator, Gotham, and the reveal of Marvel Animated Minimates Series 3. Marketing supervisor Zach Oat will moderate the Q&A, and give out prizes for the best questions!

Then, on Sunday, July 24, DST will present “Inside DST: Ghostbusters, Star Trek, Marvel & More” from 3:00 to 4:00 in Room 24ABC. DST sculptor Eli Livingston and prototype painter Jason Wires will discuss upcoming action figures, statues, ships and banks from Star Trek, Gotham, Marvel, Justice League and more, and a slideshow of upcoming product will showcase unreleased items. Once again, DSTZach will moderate the Q&A and award prizes!

And in addition to the long list of exclusives that will be available at DST’s booth #2607 – including products based on Marvel, DC, Ghostbusters and Star Trek – there will also be two DST items on sale at the Entertainment Earth/Toys”R”Us booth, #2343. One is a marshmallow-covered Ghostbusters Select Ray Stanz figure, the companion to our Peter Venkman, and the other is an exclusive two-pack of Muppets Minimates, Kermit and Miss Piggy, in formal wear!