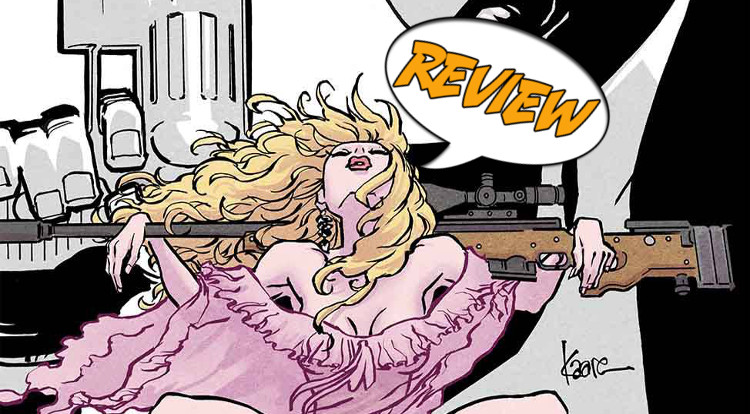 Renato Jones: The One% #3 Review

What happens to the one percent when they’ve gone too far?  Renato Jones, that’s what.  A masked assassin by the name of Freelancer with a bladed gun, his mission is to kill every last one of them.  Kaare Andrews’s creator owed book gets pretty wild and Major Spoilers has your review of issue three.

Previously in Renato Jones:  Renato Jones was an orphan taken in and raised to be a killer.  He blends in with the rich, acting like one of them while also being the Freelancer who is the only one who can make them pay.  After killing a one percenter, the counsel of some of the richest people on Earth are worried.  But they’ve hired themselves an assassin to hunt Renato: Wicked Awesome.

ON THE VERGE OF EXCESSIVE

Kaare Andrews has been doing some cool things with Renato Jones: The One%.  I love the concept of someone killing rich people who believe they’re above the law.  And while the topic may be a tad late, it still holds some weight.  The book is violent and has material that certainly isn’t for everyone (Last issue had a party that would make Caligula blush).  The book has still been a fun read, but with this issue it feels like Kaare Andrews may be pushing the edge a bit much.

The opening is the weakest, reading like a scene straight out of Sin City, complete with black and white artwork.  Renato goes to kill a woman infamous for marrying wealthy men who eventually end up dead after a night in bed with her.  Dialogue and narration read like someone imitating the worst parts of Frank Miller and I rolled my eyes more than once.  Apparently the one percent don’t make Mr. Jones so sick that he won’t do the dirty with them.  It’s cliché and a tad sexist to be honest.  Renato Jones still ends up shooting her in the morning, so there’s that.  The remainder isn’t bad but not as strong as the previous two issues either.  Each moment with characters is interesting but as a whole reads as if there isn’t focus.  My favorite parts of the story, besides the action/violence, are watching Renato have to blend in with the rich.  It’s a cool wolf among the sheep concept but also shows just how tempting the lifestyle is (in the book’s world at least).

Unfortunately Mr. Andrews is skirting the edge of becoming excessive with his ideas, especially with one of the villains: Wicked Awesome.  Besides the horrible name, the character reads as a jag bag frat boy who gets his jollies from hurting others and talking about how cool he is.  And how he’s such a dick.  I get what the writer is going for but it doesn’t play well, especially when you have a goofy character do some horrific things.  Seeing Wicked Awesome’s point of view as he holds a woman’s severed head isn’t that appealing to me, no matter how much I enjoy blood or gore.  Plus, the whole issue borders on being misogynistic as a majority of the women are sex objects or damsels in distress.  Hopefully things get better because I was really enjoying the story before this.

Kaare Andrews has a defining style, no question about it.  Some may say he is a Frank Miller wannabe, and I understand, but Mr. Andrews has enough original ideas and talent that I disagree.  When the action gets going, there is awesome movement and Andrews is able to draw things I’ve never seen before.  Characters porportions are beyond exaggerated but is all part of the Kaare Andrews package.  What I find Kaare Andrews does best is coloring.  His use of reds as backgrounds to contrast the blacks and whites is done extremely well.  Even when using the black and white “Frank Miller” style, he pulls it off and the pages are striking.  Doing art with black and white only in that way looks easier than it is and Andrews has it nailed.  When he’s not using colors as backgrounds, he doesn’t skimp, drawing everything with great detail.  The issue may not have been the best read, but the art is never a let down.

BOTTOM LINE:  A DIP IN QUALITY

The first two issues of Renato Jones: The One% were a blast but issue three takes a dip in quality.  Much of the book reads like a Frank Miller rip off or just plain silly and moments border on sexist and misogynostic.  Kaare Andrews never fails to deliver on the visual front and the book is great to look at if you’re a fan of the style.  I have high hopes for the series though and am hoping this issue was a fluke.

Disappointing compared to the first two, Renato Jones: The One% #3 reads like a scatterbrained Sin City rip off. The artwork is great and the strongest element by far.