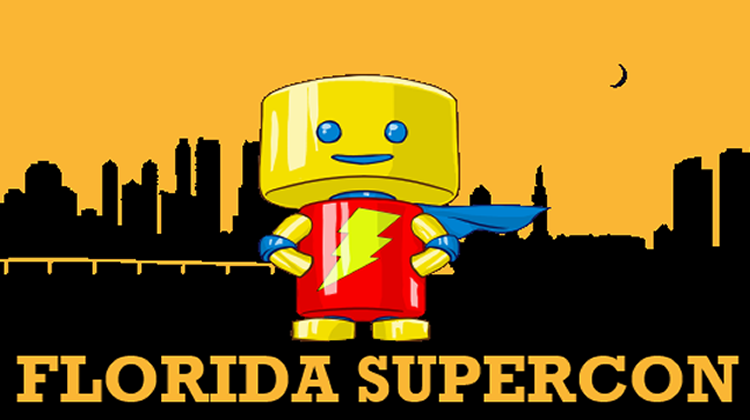 It’s tough on fans attending a convention when things move around from year to year. Add to that construction going on at the location and a new weekend, including a major holiday, and you have attendees, guests and dealers all uncertain as to what will happen.

That’s what took place at this year’s Florida SuperCon, held in Miami Beach, Florida, this past weekend.

THE GUESTS AND CREATORS WERE GREAT The big name in the guest list returned from last year, this time to celebrate the 50th anniversary of his show, and that was William Shatner of Star Trek fame. Walter Koenig was also there as well!

Other media guests included Morena Baccarin and Ben McKenzie from Gotham, Rene Auberjonois, Chase Masterson and Michael Dorn from Star Trek: Deep Space Nine, Denise Crosby from Star Trek: The Next Generation, Michael Cudlitz from The Walking Dead, Robert Duncan McNeill from Star Trek: Voyager, and a slew (the technical term) of voice actors – far too many for me to mention here.

Of course, I was primarily there for their comics guests, which included Greg Capullo, Eddy Barrows, John Beatty, Tony Bedard, Jeff Dekal, Leila Del Duca, Neal Adams, Colleen Doran, Keith Giffen, and Joe Keatinge, just to name a few! As I try at every con, some of the comics creators mentioned may be interviewed in upcoming episodes of my weekly Wayne’s Comics Podcast.

Once again I was helping at the Stabbity Bunny booth, this time in the exhibtors’ area. We had a lot of other Indie comics creators around us, as well as other creative artists. That was nice, for a change!

Cosplayers, as always, were well represented, and I’m including photos of two of my favorites with this column.

Because I was busy, I didn’t get to go to the many panels and presentations on the schedule, some populated with guests while others had local experts of various trades and experiences. I don’t know how accurate they were, but some of the folks I ran across who attended several of them didn’t seem as interested in the topic choices as they had been in the past. Some cons present panels that people they know are interested in discussing, and they may not always align with the fans, but I can’t be sure about that.

As it has in the past two years, the location of several areas flipped from the side they had been at in 2015. It was odd to see that the majority of fans seemed to flock to Artist Alley and the dealers’ area instead of where the stars and exhibitors were. From our location, we could look down the aisle and see tons of people buying t-shirts and the like, but it didn’t seem that many of them got to our area.

Construction made it a challenge for dealers and exhibitors to get their merchandise inside. We had to park outside the front entrances of the building and lug them across the floor as the security guards repeatedly reminded us only to bring the stuff in and NOT to set up! Parking was weird, too, in that there were two big lots at the nearby high school, but there were also garages and spaces nearby. We didn’t select the least-expensive choice, but at least we knew where we were going to be each day.

There were three things that I had seen at previous cons, but for some reason, they stuck out to me during SuperCon. A lot of people are going to have to make decisions about Florida SuperCon in 2017. The construction at the convention center will have switched sides, so everything will be in the other half of the building. No one could assure any of us that unloading and loading would be any better, either.

When we were getting ready to leave, I hunted down a security guard who said they were just then deciding how this would proceed. I would highly recommend that these kinds of vital decisions be made sooner in the future! It ended up well for us since we were able to bring our van to the loading area, but we could have had to push our stuff to the other end of the building again where I saw cars and vans triple-parked!

The biggest problem is that, while some of the vendors had a great con, most of the people I had the chance to talk with said it was one of the worst they’d been to in years! One artist drove all the way from Ohio and still got there after an accident to be able to sell his stuff. He was pretty open in his discouragement about next year. I actually heard that from a lot of people, sadly enough.

This will impact the fans’ experience as well if there are a lot fewer dealers, exhibitors and possibly guests and creators. I would say that the best place to get an idea as to what might happen is to go to the con’s website at this link. Hopefully, the organizers will get the word out as to how things will proceed as early as possible so people can make their decisions as to where to attend or sell their wares there in 2017.

It was still a good experience, meeting people and fans finding things they knew they wanted as well as those they didn’t, but there’s been some damage to this con’s reputation among those who attend as well as those who exhibit, and that could affect its future. We’ll see!