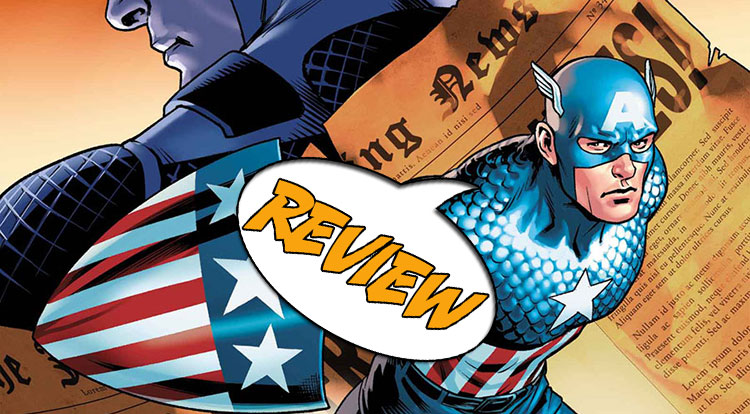 O Captain! My Captain! Our hailing of Hydra is done, and your Major Spoilers review of Captain America: Steve Rogers #2 has begun. Previously in Captain America: Steve Rogers: After having his Super Soldier serum powers restored, Steve Rogers once again reclaimed the mantle of Captain America. With Jack Flag and Free Spirit at his side, it was just like old times. That is, until Cap decided to throw Jack out of an airplane, hail Hydra and send readers across the nation into a frenzy. Could it really be true that the Sentinel of Liberty has been a Hydra agent this whole time?

In this issue, we learn what lead to the now infamous last pages of Captain America: Steve Rogers #1. How could an icon such as Captain America, a symbol of our nation for the past 75 years who literally wears the American flag to symbolize his patriotism, ever mutter the words “Hail Hydra”? Well, through the narration of the notoriously nihilistic Red Skull, the First Avenger’s deplorable actions are revealed to be the result of corruption from the Cosmic Cube known as Kobik, orchestrated by the Skull himself. He had become apathetic. Using psychic abilities he inherited from Professor X to lead an army of mindless, green and yellow-clad Hydra agents? Where’s the fun in that? It’s been done to death and Nick Spencer realized this, too. In this issue, Spencer reminds us why the Red Skull is arguably the most ferocious and formidable of Captain America’s villains.

When one of Skull’s henchman says that he can’t shoot Kobik because she’s only a child, the former Johann Schmidt acknowledges his concerns and simply instructs him to aim lower. This, of course, is before he realizes the potential hell he can raise with the power of the Cosmic Cube in his corner. Later, we get a beautifully disturbing scene in which Red Skull reads Kobik a bedtime story of sorts, where Hydra becomes the greatest terrorist organization in the world. The story ends with the Red Skull serving as the supreme leader, and they all live happily ever after. It’s moments like this that truly make your stomach turn.

The story itself is told primarily through flashbacks, shedding light on how everything from Captain America: Sam Wilson to Avengers Standoff has led us to this point. If it wasn’t clear before, it should be clear now that this wasn’t simply a case of Marvel getting cold feet after all the outrage from the comic book community. For me, this feels reminiscent of the type of world-building Jonathan Hickman did between the Avengers, New Avengers, and eventually Secret Wars. This is obviously on a much smaller scale but still, seeing how all the seeds were planted in the months leading up to Captain America: Steve Rogers #1, you have to give Spencer a ton of credit for crafting such a complex overarching story through several interconnecting titles.

I also think the way this arc is being structured, at least so far, works really well for the story being told. We had the set-up and the big twist in the first issue and now we get the explanation. I would imagine the next few issues will be where we see the real meat of the story before everything wraps up in the conclusion. The only detriment is that this issue itself doesn’t give us a lot of time with the titular character, himself. When all is said and done, the story may read better in trade format, which knocks this down a few pegs as a standalone issue.

Not to be outdone by strong storytelling, the pencils, inks and colors in this book come to us from the talented hands of Jesus Saiz. A regular Jack of all trades, Saiz handles each aspect of the artwork with brilliant care and crafts picturesque visuals that look as though they belong printed on canvas. The level of detail in every panel is excruciating and the panels themselves are well-balanced and have a great overall flow.

There’s something about the coloring on the faces, too, that makes them look more like paintings, adding a surreal level of vividness to the final product. The expressiveness of Kobik’s eyes evoke so much emotion and likewise, the cold, dead look of the Red Skull’s convey his complete lack of soul and compassion. The image of the six chefs taking their own lives for the Red Skull’s amusement looks every bit as morbid as Spencer intended it to be and just as sickening as it was to experience the Skull’s “bedtime story” through dialogue alone, Saiz’s art adds an additional layer of putridity, and I mean that in a good way. The art in this book works in every sense and with Saiz handling so much of it on his own, I worry about whether or not he will be able to maintain this level of quality on an ongoing monthly series.

I never doubted Nick Spencer’s ability to tell a good story but I severely underestimated his ability to create a one with this much complexity, in a way that doesn’t feel convoluted but rather, makes you want to go back and re-read his previous work to look for clues along the way. Coupled with Saiz’s breathtaking artwork, this is a book that definitely deserves your attention.

I never doubted Nick Spencer’s ability to tell a good story but I severely underestimated his ability to create a one with this much complexity, in a way that doesn’t feel convoluted but rather, makes you want to go back and re-read his previous work to look for clues along the way.