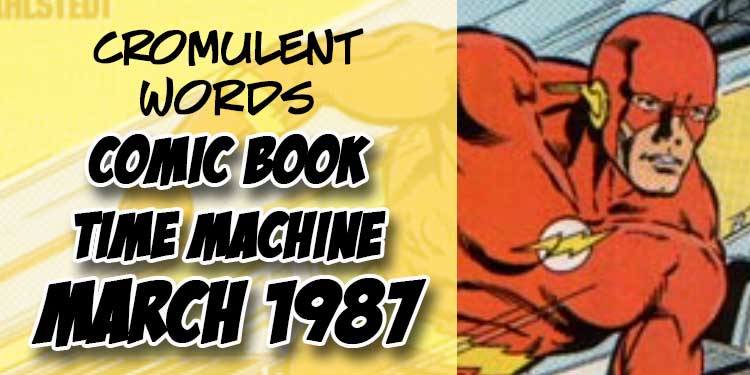 So, I recently discovered The Newsstand feature at Mike’s Amazing World. If you’re not familiar with the site, you pick the month and year, and Mike spits out all the comics published that month. It’s the ultimate nostalgia bomb. Lacking anything more important to say, today we’re setting the coordinates for March 1987 (a randomly chosen destination, for sure), when I was 17 years old. Let’s take a look at the edited highlights of what comics I bought that month.

Issue of the Month: Question 5 No doubt about this one. The Question was my favorite ongoing comic at the time, and issue 5 is probably my favorite single issue of the run. After a fairly rocky start – with writer Denny O’Neil pushing the reader’s suspension of disbelief a bit too far on the debut issue (the clearly human lead character was shot in the head and drowned, but somehow gets better in issue two) – issue five finds everything working. O’Neil’s Zen take on Victor Sage is firmly in place, and the art really gels this issue, with penciler Denys Cowan and inker Rick Maygar coalescing to form one of the unsung art teams of the late 80s. What if Dr. Doom used The Purple Man to take over the world? And what if the world seemed better off for it? The perennially underrated David Michelinie hits this one out of the park. Future movie-star Wonder Man is the point of view character here, as Iron Man asks him to volunteer for a Plot Device/Lengthy Sensory Deprivation experiment, so that he alone is spared the ravaged of the Purple Man’s mind control. He emerges to find Dr. Doom ruling a world devoid of war, crime, and poverty. Suitably horrified, he wakes up a few of his Avenging friends, including Captain America at his most self-righteous.

The book does a good job – a fantastic job when you stop to consider the audience it was aimed at and the political climate of the late 80s – of addressing the bind these heroes find themselves in, and – of course – Captain America seems to be the only one who is utterly convinced that freedom of choice is more important than freedom from starvation and war.

Frankly, I’m surprised that this story wasn’t discussed more over the last year, with its obvious similarities to Jonathan Hickman’s recent Secret Wars crossover. At any rate, it’s past time we gave this one a reevaluation.

Line of the Month: Badger 26 One of great uncollected runs in the history of comics is Mike Baron’s Badger. The entire First Comics run is worth your time, but the issues drawn by Bill Reinhold (5-32, plus the Hexbreaker graphic novel) are a particular highlight.

This is the first issue of the two-part “Roach Wrangler” storyline, which climaxes with the main characters being hopelessly overrun by cockroaches while Badger screams, “Goosh! Goosh for all you’re worth!” You’d be amazed at how often life provides you a proper context to quote that line.

Art of the Month: Avengers 280 This one shot issue is an epilog to the classic Roger Stern/John Buscema “Under Siege” storyline. Breakdowns for the issue were by Bob Hall, who also did the art for Emperor Doom. Finishes were by Kyle Baker, and his style was a complete and utter revelation to me at the time. Baker worked as a journeyman inker for Marvel during the mid to late 80s, and he was one of the first artists whose brushwork I could instantly recognize. His work went a long way toward teaching me exactly what an inker contributed to the page. You people just don’t understand how important it was at the time to know that you were never more than 30 days away from another Alan Moore Swamp Thing story.

Issue I Loved That Everyone Else Hated: American Flagg! 42 If there was one thing all comics readers seemed to agree about in the late eighties, it was that no one but Howard Chaykin should write American Flagg!, and if someone else was going to write it, it absolutely shouldn’t be a left-leaning, pot-smoking, Cat Stevens-listening, Meher Baba-worshipping hippie like J. M. DeMatteis. Well, all comic readers but me, I suppose. Dirty Little Secret: I didn’t like American Flagg! until DeMatteis took it over. The only runs I ever really enjoyed on the book were DeMatteis’ and those comedic backup stories by Alan Moore.

Comic I Missed at the Time but Quickly Grew to Love: Concrete 1 If you haven’t read Paul Chadwich’s Concrete, you really should check it out. The elevator pitch is Ben Grimm is turned into The Thing by aliens and left to live the rest of his life in our (non-superheroic) world.

Books That Were “Important” at the Time: If you weren’t reading Marvel comics in the 80s I can’t properly convey how important it was at the time to find out who the Hobgoblin was. I’d refer to this as the nerd version of “Who Shot JR?” but that would probably only confuse matters further. (And get off my lawn.)

The Hobgoblin was revealed to be Ned Leeds, by the way. Ned had, of course, been a suspect, but Stern kind of went out of his way to demonstrate that Ned couldn’t be the Hobgoblin, so this was disappointing at best. The first appearance of Jason Todd, the only super-hero (that I’m aware of) who wasn’t created until after his character was already killed. I suppose that’s a neat trick – thank you very much, Frank Miller – but I didn’t really care much then, and care even less now. This is the first appearance of Wally West as The Flash, as his mentor (and Silver Age Flash) Barry Allen had (up until recently – we’re dealing with Flashes here, so expect time travel) died heroically defeating the plans of the Anti-Monitor during the Crisis on Infinite Earths. (Did you ever just stop for a moment and wonder what you’d think about comics if you approached them with a completely blank slate?)

While I wasn’t a huge Flash fan, I picked this up because it was written by Mike Baron, whose indy books Nexus and Badger were favorites of mine at the time. I liked the book, especially the whole “I have to eat all the time since I’m constantly burning calories” riff.

I happened to take a look at this book again a few weeks back, and I was surprised to find that it represented pretty much everything wrong-headed about the “realistic” turn comics took in the mid-80s. Honest to God, the plot of the first appearance of Wally West as The Flash, in the number one issue of his new comic book series, is “Flash gets health insurance.” Wally is contacted by some doctors who ask him to race a kidney across the country for them. He dares to want something in return for his work. Don’t get me wrong, I like it when Spidey has trouble making ends meet, but usually – while Peter is swinging about the city wondering how to pay his cable bill – The Vulture or Stilt-Man interrupt with a plot, or at least a fight sequence.