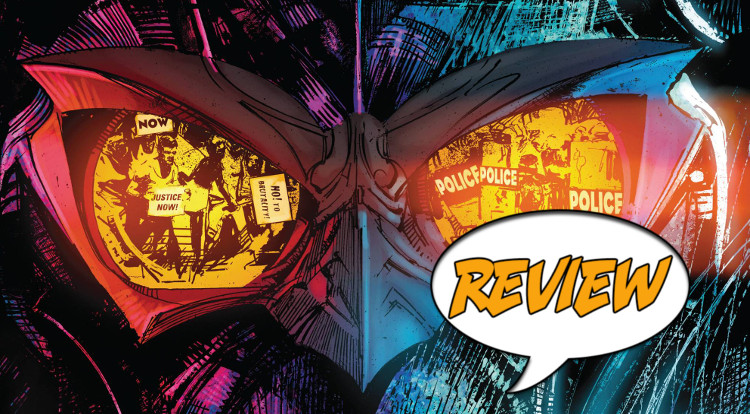 Set in Chicago among escalating racial tension between citizens and police officers, Nighthawk follows the vigilante as he fights crime and corruption.  This dark and violent book could possibly be called “Marvel’s Batman”, but is there more going on inside?  Read your Major Spoilers review to find out! Previously in Nighthawk:  While fighting both the criminals that fear him and the police that hate him, Nighthawk learns of a serial killer known as the Revelator, killing white people who have mistreated African-Americans.  Now Nighthawk must find the killer while also dealing with the growing racial tension in the city.

I enjoyed Nighthawk #1 immensely but was a bit surprised that the issue wasn’t more controversial what with the hot button issue of racial wars in Chicago.  Police shooting African-Americans is a sensitive topic and I really thought the issue handled it quite well and being from Chicago, it also hit close to home.  The whole Captain America/Hydra ordeal overshadowed this I think.  It can be hard to put real life topics and issues into a book but David F. Walker manages to use the race topic as a backdrop while keeping his story front and center.  This issue does start off with cops harassing and eventually beating some black youths, and Nighthawk of course steps in.  It’s brutal and violent and I loved that he goes farther than most heroes.  I also liked that he warns both the cops and the kids that he’s watching them, not taking one side over the other.  The rest of the issue shows off more of Nighthawk’s detective skills, which was a nice change of pace from the action of the first.  It’s revealed that the business mogul Hanrahan is behind the white supremacists from the first issue.  There is fantastic dialogue from Hanrahan that resembles a certain presidential candidate so closely it had me laughing out loud.  Whether it was intentional humor or not, it was clever none the less.  More fun banter is had between Nighthawk and his assistant and we finally learn the Revelator’s killing pattern.  It looks like it will ramp up the tension in the issues to come and I’m excited to see where it leads, especially with the similarities to Nighthawk and the killer.

Ramon Villalobos has an art style that reminds me of Jordie Bellair’s work on Manhattan Projects without the bizarre attributes.  Villalobos does a wonderful job at making the violence seem real and when Nighthawk breaks a man’s arm, the move that he uses looks exactly like what someone in that fight would do.  Detail is strong and though I like the gadgets Nighthawk uses, his flying bike doesn’t resemble an owl to me and looked a bit bizarre.  Faces can look strange at times but that is due more to the style than anything else.  Coloring is used extremely well, especially in the lighting.  Red bathes panels at times, giving them a menacing feel, especially when we see the Revelator in his home.  It’s a good looking book and has a cool indy vibe that is refreshing to see in a mainstream title.

Nighthawk #2 is another great issue that matches the quality of the first.  I liked seeing Nighthawk use his detective skills and there is still enough action and violence to satisfy your darker half.  The serial killer’s motives are unclear but the pattern is disturbing and sure to amp up the racial tensions in the story.  Fans of the Squadron Supreme should check this book out as I’m sure they’ll get a kick out seeing the character going at it alone.  Readers who are looking for a darker and somewhat controversial story would be wise to pick this up as well.  I’d say this is another one of Marvel’s hidden gems that deserves more attention.

Nighthawk #2 is a well written, dark book that touches on some hot button issues. Fans of Squadron Supreme or dark stories should check this hidden gem.