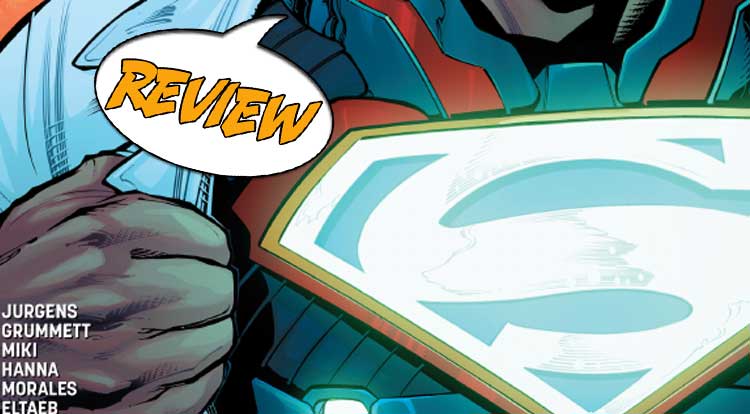 There’s a new Man Of Steel in town.

But what happens now?

METROPOLIS IS WITHOUT HER CHAMPION

We open in the lobby of the Daily Planet, where the Superman’s cape is hanging in memoriam of the fallen hero.  In strides Lex Luthor, fully armored in red and blue, wearing the S-shield after his experiences on Apokalips.  (I’ll be honest, I’m not sure how that all shook down, but it ended up with Luthor as ruler, with a Mother Box his own that says “Lex Lex Lex” instead of “Ping Ping Ping.”)  After a confrontation with Perry White, Luthor leaves the Planet, setting out to perform heroics in his own…  unusual way.  A run-in with would-be gun-runners leaves a van exploded, several men unconscious and wounded, and one criminal thoroughly shaken by Luthor’s graphic explanation of what he would do to the man if he were to hurt an innocent woman…

A DIFFERENT SHADE OF BIG BLUE

I have never been a fan of ‘Luthor as Hero’, certainly not as much as the current DC editorial team seems to be, but I have to admit this issue makes the concept work.  That is mostly due to the presence of Luthor’s inner monologue, a one-sided discussion with his comatose sister Lena, making it clear that his aim is to be a man that she can be proud of.  Tom Grummett does excellent work this issue, avoiding the ‘retro’ look that I sometimes associate with his art, and making Lex’s armor look really good.  Best of all, this issue’s final splash is a winner, an iconic Superman moment and pose delivered with an unconventional Superman and really cementing the whole concept for me.  Dan Jurgens’ writing can be an inconsistent beast, but this issue really nails the character and concept, serving almost as a “Luthor: Rebirth #1” and doing so skillfully and efficiently.

I did not expect to enjoy this issue at all, so having it be this good is a truly pleasant surprise.  There are a couple of negatives here (It’s not really a Justice League story at all, and Lex’s acquisition of the Daily Planet in less than a day is extremely unrealistic) but none so big as to derail the fun bits, leaving Justice League #52 with a well-deserved 3.5 out of 5 stars overall.  There’s still a lot of ways that this can go horribly awry, but it looks like it’s going to be worth the ride…

A nice take on Lex Luthor, balancing a desire to be heroic with his true nature, making me want to see more of this "Superman."