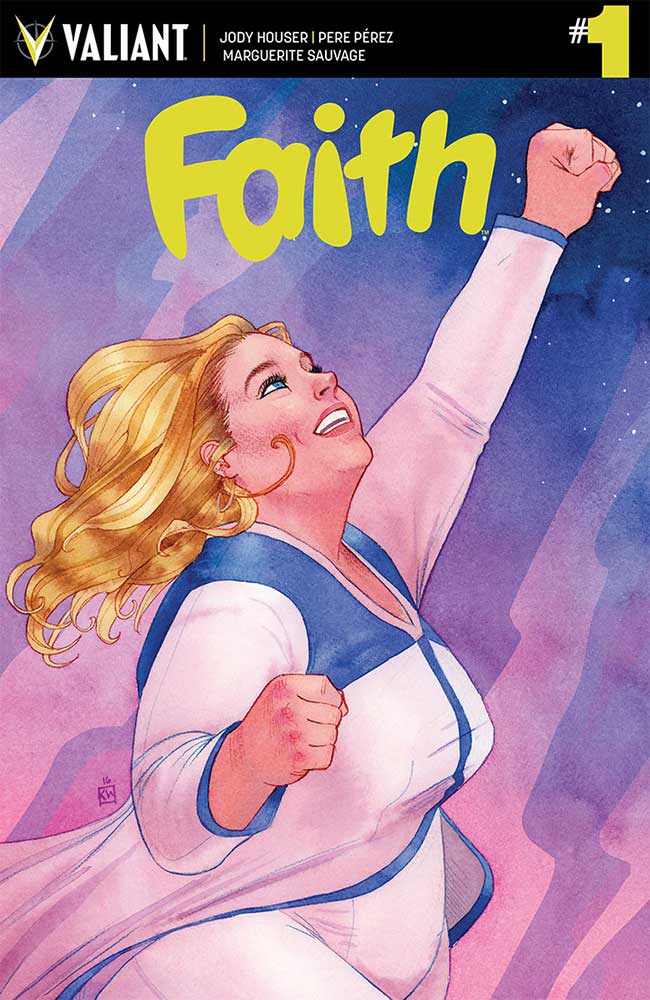 In a city under siege by robots, aliens, monsters and even worse…celebrities, there is only one woman the people of Los Angeles can count on: the stratospheric superhero called Faith! Aspiring reporter by day and dedicated crime-fighter by night, Faith has tackled every obstacle in her path with confidence – like those crushing deadlines at work, the long-distance boyfriend half a world away, and the missing back issues that plague her comics collection! But, unbeknownst to her, Faith is about to collide with the one force she never saw coming: an up-and-coming super-villain bent on snuffing her out once and for all! But who is lurking behind the mask of her new foe…and could they just be the one person capable of rendering Faith powerless?

Faith #1 Coloring Book Edition is a black and white edition of the issue printed on a paper more accepting to you taking your markers and Crayons to. So, yes… this is a reprint of the first issue on cheaper paper.

While I’m totally okay with the “adult” labeling of coloring books, what creators, publishers, and patrons are missing is these books are a perfect way for people to practice the craft of comic book coloring. What would really be fantastic is if a publisher released a digital coloring book where each page is ready to be opened in Adobe Photoshop, flatted, colored, shaded, and then submitted to a “Fan Coloring Book Facebook Page.” Then, the publisher can quietly review the pages looking for their next colorist. It cuts down on long lines at conventions for portfolio reviews, and for those artists looking to hire an assistant, it would give them a low-cost way of seeking help.