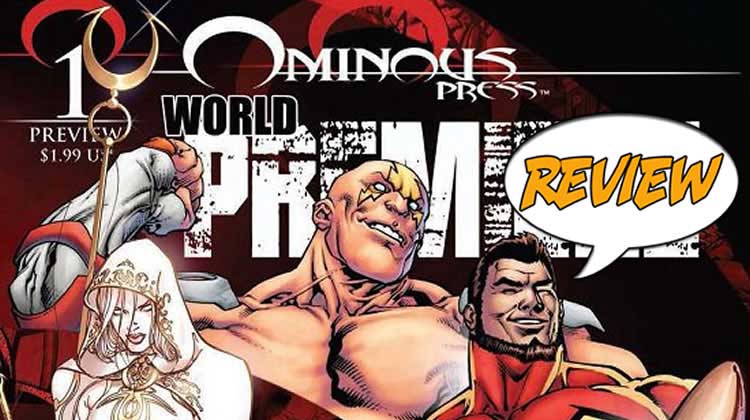 I have loved Bart Sears’ art ever since I first saw his work in Justice League: Europe. He always adds a layer of creativity that makes what I’m reading not only pop off the page, but explode off it. I hadn’t seen much from him recently, but that’s now changed as of the recent Heroes Con.

I discovered that he had formed Ominous Press back in the 1990s, which highlighted his own creations. Well, he’s bringing those characters back, and he’s enlisted other strong creators to join him in making their adventures sparkle for today’s readers!

Previously in OMINOUS PRESS: Do you remember reading tales of adventure that raced along at breakneck pace? Do you remember being immersed in characters and stories so compelling you couldn’t put them down? Do you remember anxiously anticipating the next chapter of an ongoing saga? Everyone at Ominous Press does, and we’re going to bring that sensibility to everything we create. Ominous Press will tell tales of heroic men and women, imbued with unique power, battling ultimate evil across seven very different worlds. The fate of mankind hangs in the balance. Powered by Bart Sears, Sean HusVar, Ron Marz, and Andy Smith. Relentless. Powerful. Comics.

This comic shows us three of Sears’ creations, and they are Giantkillers, Prometheus and Demi-God. Each has a different focus, with Giantkillers being described as “equal parts Blade Runner, The Lord of the Rings and Terminator,” Prometheus as “The Matrix crashing headlong into Mad Max, and Demi-God as “What happens if you mash up the mighty Thor and Deadpool? You get this guy.”

Sears has provided script and art for Giantkillers, while he’s given the reigns of the other two to Mars and the artists he’s working with. “Make them your own,” he told them.

Each story has one introductory information page followed by three of sequential comic art. After I read each one, I wanted more, but I think that was the point! If I had gone through them and not had interest in more, that would not have worked out well for Ominous Press, particularly if that had happened with more than me!

Giantkillers is told from the perspective of a young girl who brings warrior Arkon back to the dark battle he had left behind. He now hurtles randomly through the Seven Worlds accompanied by two supporting characters. It’s further described as “adrenaline-fueled sword and sorcery set in a cyber-noir landscape.” There’s a connection between Arkon and his female friend, and it seems he’s more afraid of losing her and being alone than taking on the terrible creatures after her.

There’s a huge twist at the end of Prometheus, one I certainly didn’t expect. The Prometheans are god-like heroes who live grandiose lives that entertain the masses with endless adventure. At least, that’s what they think is going on. I loved the last page with the shock, and I’m intrigued as to where these characters will go from here.

The last of the three in the issue is Demi-God, which has Jason McAndros as “an 18-year-old slacker suddenly imbued with vast might that turns him into a muscular, powerful Demi-God. In Jason’s case, great power comes with great idiocy.” He takes on the heroic name of Hercules. This is the funniest of the bunch, with lines like “I’m not even a dog person” when a three-headed dog warrior attacks him!

Each of the three has a high action quotient, and each has a character we feel for even after the three page intros. Even though it’s difficult to judge a series after only three pages, I’m truly intrigued in each of them and am looking forward to see what the creators have in mind.

As well as the informational pages in these three stories, there are other pages fans can read to learn more about the Ominous Universe. One double-page spread talks about “The Seven Worlds/The Seven Wars,” and gives us descriptions of the “seven vastly different worlds” we’ll explore in the coming months. Another double-page spread asks us to choose our side, wondering if we’ll join the Legion of Dread Lord Omin, the Dark God, or The Circle of the White, the “good guys.” Another two-page ad promotes subscription boxes, and they focus on these two sides as well.

There are also pages of concept art and an ad for a trade paperback that will reprint the stories printed when Ominous first appeared. We also meet the creators at Ominous, including the aforementioned Sears and Marz.

But what intrigued me most was the way he said “it all begins with the villain.” Sears has utilized the Dread Lord Omin, a creation of his “so terrible and powerful that overcoming” him “seems well-nigh impossible.” If you know anything about Disney movies, you know there has to be a “good” bad guy to challenge the heroes, or viewers often don’t care. I think developing a nearly unbeatable baddie will work well in the Ominousverse.

ART IN THE SEARS STYLE

The first tale was drawn by Mr. Sears, so I loved that one, obviously. The other two were drawn by other artists, but you can’t blame them for infusing some of Sears’ style into their artwork. They are playing in his sandbox, after all. It all sucked me into each tale, so I loved it!

I admired the use of the colors red and black in the various info pages. Very strongly designed! Also the colorist provides a consistent feel across the three tales since he did that for each of them.

BOTTOM LINE: Strong Stories that Can Be Powerful

I strongly believe in giving new comics companies support when they’re getting off the ground, such as AfterShock Comics. So I’m going to follow the various books Ominous will be providing.

To find out more about Ominous Press, be sure to sign up for their newsletter at their website at this link. You can also check out their Facebook page for more about them! To get your copy of this issue, go here to Sleeping Giant Collectibles.