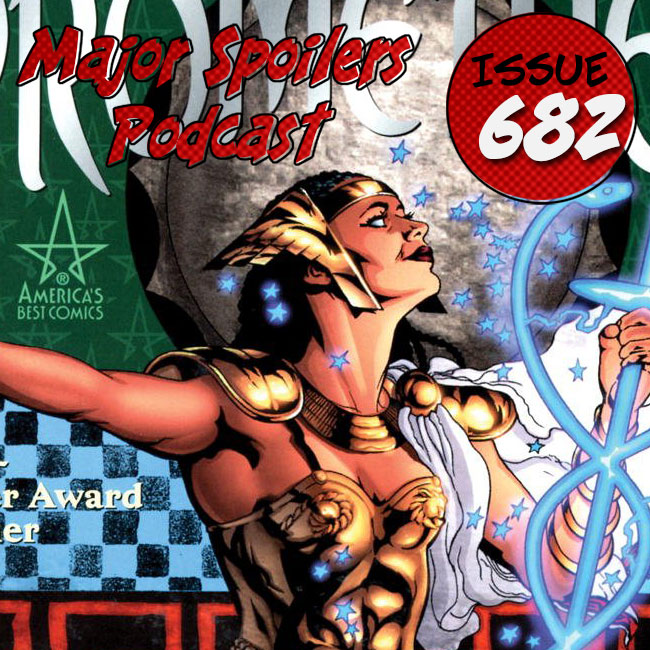 This week on the Major Spoilers Podcast: Promethea, Superman, The Flash, Han Solo, Wonder Woman, and Creepy Comics! Plus, you pick the next trade paperback we read on the show!

NEWS
Superman has been found for Season 2 of Supergirl

Make sure to head to https://members.majorspoilers.com to get a bonus track where we discuss Flashpoint, the first episode for Flash Season 3.

MATTHEW
Star Wars: Han Solo #1
Story by Marjorie Liu
Art by Mark Brooks
Publisher: Marvel Comics
Cover Price: $3.99
Everyone's favorite scoundrel gets his very own series! Han is given a top-secret undercover mission for the Rebellion -- rescuing a number of informants and spies. His cover for the assignment? Only the biggest and most infamous starship race in the galaxy! You know -- the race Han has dreamt of winning his entire life. Will he keep his mind on the mission? And can he manage to pull it off while keeping the lead? Best-selling author Marjorie Liu (X-MEN) comes to the Galaxy Far, Far Away along with superstar cover artist Mark Brooks (ULTIMATE X-MEN) in his return to interior art! Face it, readers -- there aren't enough scoundrels in your life!

ASHLEY
WONDER WOMAN #1
Writer: Greg Rucka
Artist: Liam Sharp
“THE LIES” Chapter One
Why has the Lasso of Truth stopped working for the Amazon Princess? Start down the rabbit hole as dark secrets from Wonder Woman’s past unravel her present!
[rating 3.5/5]

Major Spoilers Poll of the Week: You Pick The Trade Edition

DISCUSSION: PROMETHEA VOLUME 1
Sophie Bangs was a just an ordinary college student in a weirdly futuristic New York when a simple assignment changed her life forever. While researching Promethea, a mythical warrior woman, Sophie receives a cryptic warning to cease her investigations. Ignoring the cautionary notice, she continues her studies and is almost killed by a shadowy creature when she learns the secret of Promethea. Surviving the encounter, Sophie soon finds herself transformed into Promethea, the living embodiment of the imagination. Her trials have only begun as she must master the secrets of her predecessors before she is destroyed by Promethea's ancient enemy.