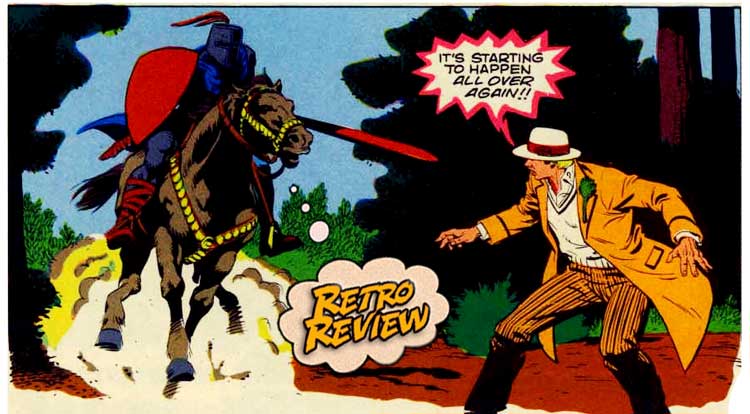 Though it began in 1963 in the UK, the television series Doctor Who was a bit slower to make its way into the America pop-culture consciousness.  But for a few glorious months in the 1980s, Marvel Comics had the monthly adventures of my favorite Doctor of all…  Your Major Spoilers (Retro) Review of Doctor Who #15 awaits! Previously in Doctor Who: The journey of the Doctor to American Comics is a long and strange one.  Aside from a few one-off oddities (like an adaptation of the non-canonical ‘Dr. Who And The Daleks‘), American comic readers didn’t get to see much of the Doctor until the era of the Fourth Doctor, who made his first official appearance in issue #57 of Marvel Premiere.  It may seem odd that superhero-heavy Marvel was the one to bring the character to American shores, but in fact it was Marvel’s UK branch that had developed and created those stories, as monthly comic-strip inserts in ‘Doctor Who Magazine’ (aka ‘Doctor Who Weekly’ and ‘Doctor Who Monthly’, confusingly.)  Those stories featured the adventures of Tom Baker’s Fourth Doctor, who had left the role in 1981.  When that book proved successful, Marvel launched a monthly title that reprinted those DWM stories in color, in their higher-quality $1.50 format.  Then, one beautiful day, the Fourth Doctor stories ran out, and we were ushered into the era of the Fifth!

Appropriately for a man whose day-to-day costume is an Edwardian cricket player’s uniform (and who at least once saved the day with a cricket ball out of one of his bottomless pockets), we find the Doctor in modern-day-for-1985 Britain, enjoying a nice wicket or however one would say that.  Unfortunately for The Doc’s relaxing afternoon of sport, events elsewhere in the universe are conspiring to complicate his day… If you ever needed proof of the decade in which a comic was written, here it is: The events of the universe are all controlled by a being behind the scenes who plays the world on a giant synthesizer, in-between bouts of trying to make that “woop woop woop” noise from ‘Come Sail Away’ by Styx.  The sour note struck in the chords of reality have an immediate effect on The Doctor’s world, transforming the cricket ball currently being bowled at him into a grenade! The Doctor’s reflexes save him from annihilation, and his warning allows others to get clear, but no one is certain how or why such a thing could have happened.  No one, that is, save for us, the all-seeing readers…

The Doctor begins to suspect that something is afoot in the greater scheme of things, perhaps eddies in the time stream, but before they can figure out whether that’s his sofa or not, gunshots are heard from the nearby woods.  One of the villagers reports that he was overrun by a horde of men wearing armor, carrying swords, causing the local constabulary to investigate… Fortunately for the residents of this quiet British hamlet, they are being visited by a man who not only knows a time anomaly when he sees one, he’s got some experience with blokes wielding swords… Quietly mourning the loss of his favorite cricket bat, The Doctor returns to the TARDIS to see if the disturbances are localized to his area, perhaps even caused by his time-traveling presence.

The answer is, sadly, no… To his credit, Dave Gibbons does a very good job rendering the face of Peter Davison from panel to panel, although the Doctor’s hair can be a little bit strange sometimes…  Exiting his ship to gather his things from the village, The Doctor suddenly sense that the fabric of time is shifting again, only to find himself on the receiving end of a charge by a very aggressive-looking medieval knight! Using the TARDIS’ magnetic clamps, The Doctor brings the unconscious kuh-nigget aboard, removes his helmet and attempts to awaken him… The young man introduces himself as Sir Justin, a knight with no fiefdom, who travels his domain trying to right wrongs.  The Doctor advises him that he may have a job opening for ‘Companion’, and a new friendship is born!

Which is good, because out in space at the Danny Elfman Memorial Reality Synthesizer, the source of the sour notes has been revealed: An ancient demon called Melanicus! His friends, I assume, call him Melanie.  The chaos in the time-stream quickly becomes visible to all, including an ancient Time Lord known as Rassilon, who sits in a temporal landscape eerily reminiscent of a later Dave Gibbons joint, where Doctor Manhattan makes his way to barren sands of Mars…

As one of the high mucky-mucks of Gallifrey (this story, it has to be said, takes place BEFORE the events of ‘The Five Doctors’, where Rassy’s tale takes a decided turn), Rassilon rallies his fellows and decides that he must call upon Gallifrey’s most unusual agent, a man who answers to no one save his conscience, and knows how to accessorize with a vegetable.  That agent, coincidentally, has just arrived on the planet, bringing along a chainmail-covered warrior…

…and a stowaway of unknown provenance. What could his agenda be?  Who is this strange bubble-headed fellow anyway?  Since you’re not likely to find out any time soon, I’ll tell you this much: He is an artificial being, his name is Shayde, and his intentions are occasionally questionable.  Still, he becomes a key part of defeating Melanie the cosmic keyboardist in an issue or three.  As for the Doctor himself, thanks to a telepathic machine matrix, he is able to communicate directly with the most secretive of Gallifreyan agencies: The CIA (Celestial Intelligence Agency.) As for this fellow, he is indeed, reputedly, THE Merlin of Arthurian legend, which means that he’s also the Merlin who empowered Captain Britain, met the X-Men and manipulated Excalibur, thanks to the power of the shared Marvel Universe (and, more importantly, the writers of those books, many of whom worked on Marvel UK titles.)  It’s an exciting couple of chapters for The Doctor, setting off his adventures in style, and I still fondly remember Five’s adventures with a knight and a dome-headed robot.  (The Sixth Doctor got a delightful shape-shifting penguin companion in his comic run, but that’s neither here nor there.)  Parkhouse’s work on DWM is excellent, full of menace and cosmic significance, and it should be noted that Alan Moore, Grant Morrison and Simon Furman were involved in these stories as well.  All in all, Doctor Who #15 holds my imagination as well as it did when I was 14, providing complex and interesting story, really skillful art and, of course, the Best Doctor in his stripey pants, earning a well-deserved 4 out of 5 stars overall.  If you ever dig up these issues, I highly recommend them, even the (sigh) Fourth Doctor ones…