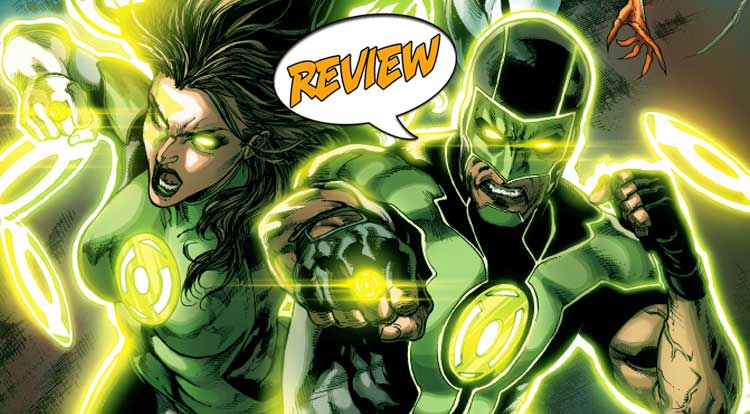 Hal Jordan and the rest of the Corps have set off for outer space, leaving only two rookie Green Lanterns behind to protect the Earth…  Your Major Spoilers review of Green Lanterns #1 awaits!

Previously in Green Lantern: A crisis has arisen in space, forcing Hal Jordan to abandon Earth and Sector 2814.  In his stead, he has left rookie Green Lantern Simon Baz (you may remember him from his brief stint in Justice League Of America a couple of years ag0) and brand-new Lantern Jessica Cruz, herself the former bearer of the mantle of Power Ring, Earth-3’s inverted Green Lantern.  Before leaving, Hal took the liberty to merge their power batteries into one, forcing them to work together, and left them under the tutelage of the Justice League.  As with most Jordan plans, it’s kinda half-@$$ed…

We start in a remote area of Arizona, where our newly-minted Green Lanterns are responding to a report of an unauthorized alien incursion.  Upon arrival, they discover what seems to be the home of a serial killer, filled with human bodies…  and one that is alien, wearing a Red Lantern symbol.  Things quickly escalate, then explode, and a rage-powered Hell Tower arises from the desert, just in time for Amanda Waller’s A.R.G.U.S. forces arrive and take custody of the scene.  We get a little of Baz’s home life, a little of Jessica’s (including some serious agoraphobic leanings) and more than a little of Atrocitus and Bleez in space, with heavy portents of the impending demise of the Red Lantern Corps.  As the issue ends, Mister Baz is overwhelmed by visions that his rings called “The Emerald Sight” while Jessica is overrun by rage-powered civilians, desperately calling to her partner for help.

The biggest problem that I have with this comic comes in the coloring: Many of the Lantern ring-effects are so pale as to appear yellow, which is not just poor production, but diametrically opposed to what Green Lantern rings actually do.  The art is very strong, as well, with Rocha and Leisten delivering some really strong storytelling, a couple of cool effects and putting a lot of emotion into the Green Lanterns’ faces.  The downside of the art is an occasional lack of layout clarity (the explosion that heralds the Hell Tower is a major offender), but in a book with this much going on, it’s not as noticeable as it might have been in a quieter story.  I am still troubled by minor things (Baz still carries a handgun, in case his ring fails; Jessica has a goofy looking eye “tattoo” when powered up; a scene with Baz’s family) but overall, the story and art carry the reader past these wobbles.

As a first issue, naturally there is a lot to introduce in these pages, but even with the ‘Green Lanterns: Rebirth #1’ not so long ago, this issue feels almost overtasked, but the character work is solid and makes it clear that these are unlike Earth’s previous Lanterns.  Green Lanterns #1 makes a good showing for itself, even with a few kinks to work out, and I’m interested in seeing where it’s all going, leaving this issue with a better-than-average 3.5 out of 5 stars overall.  Part of me actually hopes that the Red Lanterns are going to die out, if only to help simplify the number of Lantern Corps extant in the DC Universe…

An interesting start, but a few too many moving parts getting introduced all at once. I like the Baz and Cruz team, though...