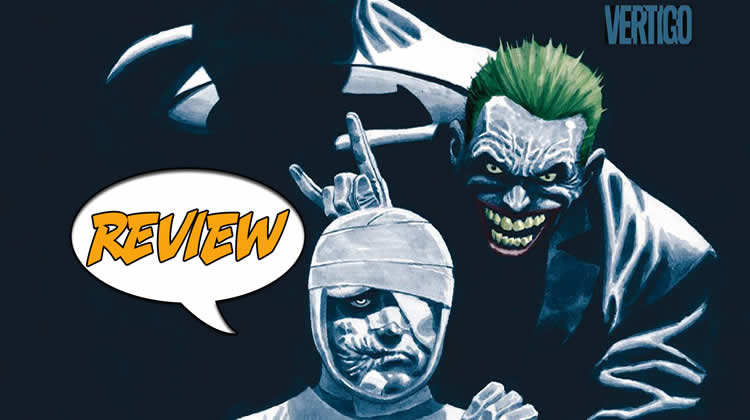 Batman is a character that works regardless what kind of story you’re telling. Sci-fi? Sure! Horror? Of course! Mystery? You bet!

Now a hardcover original graphic novel arrived this week that shows he even works in a “real” tale of struggle and redemption.

Previously in DARK NIGHT: A TRUE BATMAN STORY: The Caped Crusader has been the all-abiding icon of justice and authority for generations. But in this surprising original graphic novel, we see Batman in a new light-as the savior who helps a discouraged man recover from a brutal attack that left him unable to face the world. In the 1990s, Eisner Award-winning writer Paul Dini had a flourishing career writing the hugely popular Batman: The Animated Series and Tiny Toon Adventures. Walking home one evening, he was jumped and viciously beaten within an inch of his life. His recovery process was arduous, hampered by the imagined antics of the villains he was writing for television including The Joker, Harley Quinn and the Penguin. But despite how bleak his circumstances were, or perhaps because of it, Dini also always imagined the Batman at his side during his darkest moments. DARK NIGHT: A TRUE BATMAN STORY is the harrowing and eloquent autobiographical tale of Dini’s courageous struggle to overcome a truly desperate situation. It is a Batman story like none other, and one that will truly resonate with fans. Art by the incredibly talented Eduardo Risso (100 BULLETS, DARK KNIGHT III: THE MASTER RACE).

I’ve loved Mr. Dini’s writing ever since I first heard his name. He and Bruce Timm made Batman: The Animated Series sparkle when it came to storytelling, not to mention how they scripted follow-up cartoons. When I saw his name, I knew I was going to get a great story! Not only that, he came up with Harley Quinn, who is one of DC’s best-selling leading ladies today, which I think is still a testament to his creativity.

But this part of his time on the show was something I wasn’t aware of. Turns out he was considered an “easy mark” as he was returning home from dinner with a friend on evening, and they beat him so badly that he required surgery on his face in order to repair the damage.

Now, as a genre fan, I can relate to being considered “out of touch.” When I was growing up, anyone who like comics and superheroes was considered childish and immature.

When I was 12 years old, I went through a brief time when I decided that since Batman wore a cape, I would wear one as well. My mother was very patient with me as I donned it around the house, but she was always a big sci-fi/comics/adventure story buff. She understood.

One day, I wore it outside and ventured to the front lawn of our house. It only took a minute before I heard neighborhood kids down the street yell out, “Cape!” I turned to see them running up the street after me. I’m sure my cape would not have survived the experience (not to mention what they might have done to me), so I ducked into the backyard and hid in the cellar. I waited until they realized they wouldn’t find me, then went to the kitchen where my mother wondered what was going on.

Let’s just say, that was the last time I ever wore my cape.

Granted, what Dini endured was like 10,000 times worse than my embarrassment, and I like to think that comics and comics-related properties are so popular now that people would be more understanding, even teen-agers. But I understood, to some very small degree, what he went through.

Another thing I related to that Dini experienced was his vivid imagination. To him, the “real” world was actually inside what he could conceive, and that helped him in his career as a writer.

As he goes through this hardcover volume, Dini’s imagination brings in many of the characters he was writing at the time, including Batman, the Joker, Two-Face and even Harley Quinn. They offered him advice or condemnation, but they helped him work through the entire experience, often more positively than his real-life friends.

When he returns to writing at the end of the issue, we’ve gone through much of what he had to endure, and we understand much of what he felt and went through, including how helpful his imagination and the heroes and villains that dwell there were. That he could continue to write as powerfully and as masterfully as he does is a testament to his inner strength, I believe.

Risso has been making great comics art lately, and I’ve enjoyed every book that featured his work that I’ve read. This volume was no exception.

Probably the best art in the entire offering was that cover, with Batman and the Joker behind Dini, who is wrapped in bandages. Even with a man in terrible pain, the Clown Prince of Crime can’t help but give Paul rabbit ears. Sheesh!

BOTTOM LINE: More Than Worth the Money

It’s important to note that the police never found out who did this to Dini. Based on their attitude from his perspective, it didn’t seem like they thought they ever would, or possibly ever wanted to. That’s one of the things he has to deal with, and that makes it unlike most Batman stories.

It’s not for the kids, especially given the trauma he endures, but it was certainly a wise move to put this out in hardcover under the Vertigo name. You get 129 pages of fascinating experience!

If you’ve experienced this kind of personal tragedy, regardless to what degree, I think you’ll find this as cathartic an experience as I did. Yes, there’s a lot of dialogue between Dini and the others he encounters (and even us), but it is a fast read and one worth diving into. Highly recommended! Digital versions of this hardcover will be available this Tuesday, June 21, though you can pre-order it now.