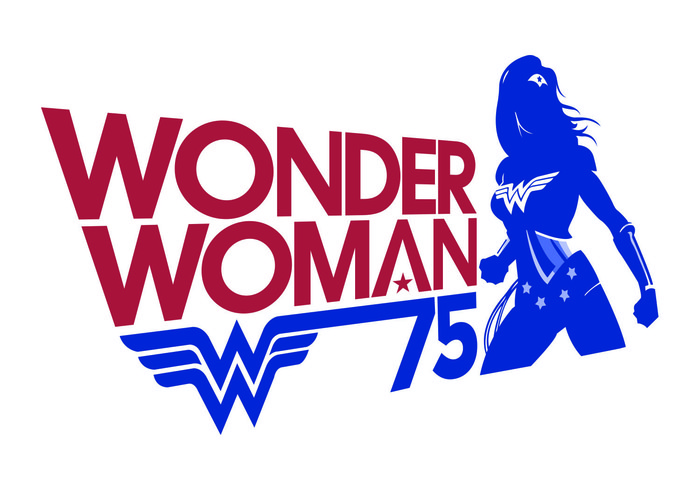 To mark the 75th anniversary of one of the world’s best-known Super Heroes, Warner Bros. Entertainment and DC Entertainment today unveiled plans for a year-long celebration of Wonder Woman. The character has transcended the pages of comics to become a powerful global symbol of justice, equality and peace.

Beginning with a new commemorative logo honoring the Amazon Princess’s legacy, highlights of the year will include the relaunch of her comic book series; new graphic novels; convention panels; and consumer products, including apparel, toys and other exclusive merchandise. These and further anniversary events will culminate in the release of the very first “Wonder Woman” feature film on June 2, 2017.

First seen in October 1941 in All-Star Comics #8 in a back-up story meant to test her appeal at a time when female superheroes were rare, Wonder Woman quickly broke out and headlined her own title by the next year. Subsequent generations came to know the star-spangled heroine with metal bracelets on her wrists and a magic lasso by her waist via her hit 1975-79 television series and roles in animated shows and movies, as well as her historic appearance on the cover Ms. Magazine #1 in 1972. This past March, Wonder Woman was seen for the first time in a live action motion picture with her introduction in the global blockbuster “Batman v Superman: Dawn of Justice.”

“Wonder Woman is a legend around the world and one of the most valuable franchises at our studio, and we’re thrilled to celebrate this anniversary,” said Kevin Tsujihara, Chief Executive Officer, Warner Bros. “Millions of fans already know her from comic books, television, and her big screen debut in ‘Batman v Superman,’ but the upcoming year building to her first solo film will be the most dynamic and exciting in the character’s history.”

Over the decades, Wonder Woman has run for president, organized a union, flown an invisible plane, lost and regained her powers, studied martial arts, battled Ares, the God of War, worked at a fast food chain, and had a romantic relationship with Superman. Her diverse history will be integrated and celebrated in a new comic book series launching this month as part of DC Universe: Rebirth that honors what fans love most about the character.

Written by fan favorite Greg Rucka and on sale June 22nd, Wonder Woman #1 will be the first print debut of the new Wonder Woman 75th commemorative logo. Other variations of the new logo created for various products merge the character’s name and traditional “W” symbols with the number 75, set alongside a striking blue silhouette of the iconic character in a warrior stance.

“Wonder Woman has long stood with Batman and Superman in the trinity of DC’s most iconic Super Heroes, but she also stands alone as a symbol of equality, justice and female empowerment and is more relevant today than ever,” said Diane Nelson, President of DC Entertainment, President of Warner Bros. Consumer Products, and President and Chief Content Officer of Warner Bros. Interactive Entertainment. “With her roots in Greek mythology and American feminism, Wonder Woman is one of the most unique and compelling characters in comic book history; her longevity is a testament to her global appeal and the special place she holds in the hearts of generations of girls who have imagined wielding their own lassos of truth.”

Created by William Moulton Marston, a psychologist who invented the lie-detecting polygraph machine, Wonder Woman was conceived as a new type of superhero who used wisdom and compassion, not just her fists, to triumph over evil. Daughter of the queen of the all-female Amazon tribe from Greek mythology, Wonder Woman was imbued by the gods with powers, including super-strength and a lasso that compels anyone it surrounds to tell the truth. Wearing a costume inspired by the flag of a downed American pilot, she travelled to “patriarch’s world” to fight for such values as peace and equality. She is the only female comic book character to have her own stories continuously published for the past three quarters of a century.

Among the events and products Wonder Woman fans can look forward to over the next year from Warner Bros. and DC Entertainment are:

● At long last, June 2, 2017, will see the long-held hopes of millions of fans fulfilled as the first “Wonder Woman” movie is released in cinemas worldwide, starring Gal Gadot in the title role, Chris Pine as Captain Steve Trevor, Robin Wright as the Amazonian General Antiope and Connie Nielsen as Queen Hippolyta, directed by Patty Jenkins.

● A “Wonder Woman 75” panel at San Diego Comic-Con International in July 2016 will celebrate the history and future of the Super Hero, along with displays at DC’s booth of Lynda Carter’s original costume from the 1970s television series and numerous additional costumes, including the one worn by star Gal Gadot in the upcoming film.

● A commemorative box set of Wonder Woman’s greatest stories to be released by DC in July, as well as a hardcover special edition celebrating her 75th anniversary to be released in October and available through the holidays.

● A life-size Wonder Woman invisible jet will be on display at San Diego Comic-Con and the rare plane will illuminate at night for fan photos, along with one-of-a-kind Wonder Woman-inspired graffiti-art pieces. WBCP and Mattel will offer an exclusive anniversary DC Multiverse™ Wonder Woman Action Figure and Invisible Jet combo set (available exclusively on Mattycollector.com beginning June 17) designed especially for the 75th celebration.

· Included on the home entertainment release of “Batman v Superman: Dawn of Justice,” coming to Digital HD on June 28th and Blu-ray Combo Pack on July 19th, is a 22-minute featurette called “The Warrior, The Myth, The Wonder” which explores Wonder Woman’s history, origin, evolution and powerful impact on popular culture.

● Curated Spotify playlists from top female talent in music, film, TV, sports, and more. WaterTower Music and DC’s weekly playlists showcase the music that inspires these ladies to be Wonder Women in their daily lives. Listen to the first curated list from musician Brandy Clark here and follow the WW75 playlist to receive weekly updates.

● Wonder Woman returns as a major player in the upcoming video game “Injustice 2,” the highly anticipated sequel in development by NetherRealm Studios to be published by Warner Bros. Interactive Entertainment in 2017.

About DC Entertainment
DC Entertainment, home to iconic brands DC (Superman, Batman, Green Lantern, Wonder Woman, The Flash, etc.), Vertigo (Sandman, Fables, etc.) and MAD, is the creative division charged with strategically integrating its brands across Warner Bros. and Time Warner. DC Entertainment works in concert with many key Warner Bros. divisions to unleash its stories and characters across all media, including but not limited to film, television, consumer products, home entertainment, and interactive games. Publishing thousands of comic books, graphic novels and magazines each year, DC Entertainment is one of the largest English-language publishers of comics in the world.

About Warner Bros.
Warner Bros. Entertainment is a global leader in all forms of entertainment and their related businesses across all current and emerging media and platforms. A Time Warner Company, the Studio stands at the forefront of every aspect of the entertainment industry from feature film, television and home entertainment production and worldwide distribution to DVD and Blu-ray, digital distribution, animation, comic books, video games, product and brand licensing, and broadcasting.