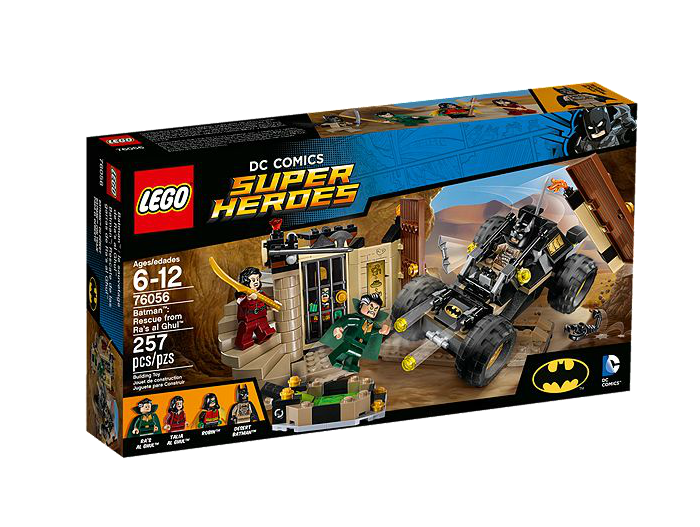 When July rolls around, DC fans will have a lot to be excited about as Blue Beetle, Ra’s al Ghul and Red Hood come to the LEGO DC Super Heroes lineup. Take the enemy by surprise and crash Desert Batman’s Buggy through the gates of Ra’s al Ghul’s hideout. Draw your sword as you duel with Talia al Ghul™ at the top of the staircase! Evade Ra’s al Ghul™ jumping out of the Lazarus Pit and rescue Robin™ from the cell—but watch out for the swinging axe trap!

On the plus side, Ra’s al Ghul, on the downside, Damian Wayne… We’ll have to wait a bit longer for this one, but with Killer Crox, Red Hood, Captain Boomerang, and Katana in this set, you are halfway to completing your Suicide Squad team.

Bite back against Killer Croc™ with the Bat-Tank!

Reinforcements have arrived! Help Red Hood™ and Katana™ stop the monstrous Killer Croc™ and evil Captain Boomerang™ from destroying Gotham City. Charge Killer Croc’s Battle Chomper with Batman’s Bat-Tank. Crush the heavily armored vehicle with the Bat-Tank’s powerful ram weapon, but don’t get bashed by the swishing tail or fall into the giant jaws. Crush the foes with super heroes teamwork and stop the evildoers once and for all! I believe we saw Scarecrow in a previous set, but this is the first time we get Blue Beetle and Killer Moth in LEGO Minifigure form!

Help Batman™ rescue the farmer from Scarecrow™ and Killer Moth™!

Gas Mask Batman™ and Blue Beetle™ are racing to help the frightened farmer in the Batcopter. Shoot the harvester before it mows down the tractor—but watch out for Scarecrow’s fear gas stud shooter! Stage an aerial battle with Blue Beetle and swat Killer Moth™ out of the sky! Stop the criminals imprisoning the farmer in the harvester’s fear gas tank and spreading fear to the rest of Gotham City.

We’ll definitely review these sets on the Major Spoilers YouTube channel as soon as we receive them!