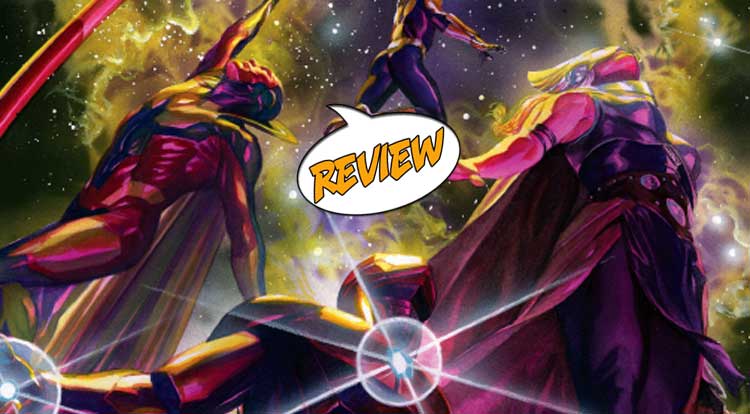 The ANAD team takes their first trip to outer space, to help Nova with his ongoing family drama.  What’s the worst that could happen?  Your Major Spoilers review of All-New All-Different Avengers #10 awaits! Previously in All-New All-Different Avengers: “Nova recently discovered that the man he thought was his father was actually an alien shape-shifter and that his real father was still lost in space. The Avengers offered to help Nova search for him, but high-quality space travel isn’t really in the budget.  Meanwhile, Jarvis took the new Wasp (Nadia, the daughter of Hank Pym and his first wife) to meet the rest of her family…

Tracing Nova’s dad’s signal into space (in a second-hand ship that Tony Stark bought from the Fantastic Four’s surplus, powered entirely by Thor’s hammer), the Avengers are stunned to immediately receive a ping.  When they trace the signal, though, their ship is shot down on a planet already full of castaways, all of whom fell for the old ‘fake emergency signal’ trick.  The team quickly assembles when a new threat shows itself, and in protecting the innocents on the planet’s surface, ends up thrown through a strange dimensional space into unknooooown dangeeerrrr.  Back on Earth, Jarvis arrives as Janet Van Dyne’s home with her step-daughter, the new Wasp, only to find Jan is still a whirlwind of action, grabbing Nadia by the arm and immediately taking off on a mission to stop a dimensional portal into the Microverse…

AND AN ALL-NEW ALL-DIFFERENT WASP

The joy of this book is in seeing all these characters with their own books interacting, all maintaining the characteristics that they have in their solo stories.  Sam Wilson is growing into his leadership role, Tony Stark is starting to balance his intellectual curiosity and jerkface nature, Thor is… Well, Thor is Thor, and she’s just awesome.  As for the newest young Avengers, Kamala, Miles and Sam are adorkable throughout, especially in their responses to being in space.  Sam acts like he’s seen it all before, Miles is gobsmacked, Kamala is annoyed at Sam for showing off, and when the real threat shows itself, things get serious fast, leaving us with a shocking final page cliffhanger.   Mahmud Asrar knocks it out of the park again artistically, showing us a number of fascinating alien races, a little bit of Avengers fighty-fighty action and well-crafted storytelling throughout the issue.

The Waid/Asrar ANAD Avengers has been a fast-paced ride from the beginning, and this issue is no exception, but it doesn’t move so fast that it leaves the characters behind, with everyone working together mostly seamlessly and using their strengths to the team’s advantage.  All-New All-Different Avengers #10 has a surprising last-page moment, excellent art and a story that leaves you wanting more, earning a very impressive 4 out of 5 stars overall.  There’s a reason why I consider this to be the flagship of the skrabillion monthly Avengers titles…