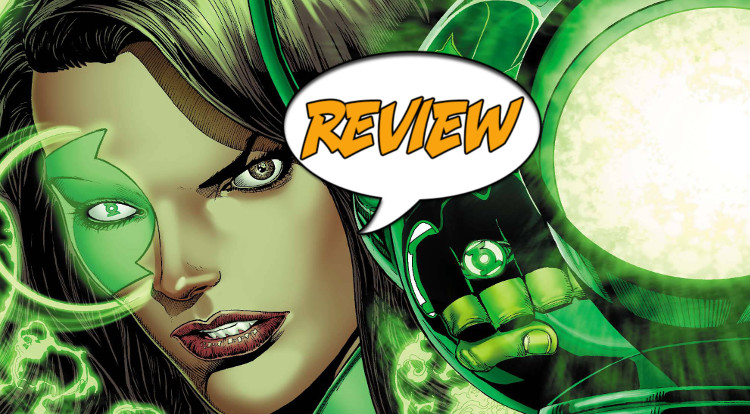 For the longest time Hal Jordan has been the leading Green Lantern for Earth and Sector 2814.  Now it’s time for a new Lantern to take his place while he’s gone.  In fact, two Green Lanterns will be working together in his absence:  Jessica Cruz and Simon Baz.  Not familiar with those two?  Luckily Green Lantern: Rebirth #1 is the start to a brand new Green Lantern series and Major Spoilers has your review after the jump! Previously in Green Lantern:  With the rebirth of the new DC Universe, Hal Jordan is needed on the far edge of the galaxy to stop Sinestro. Luckily he has replacements in the form of Simon Baz and Jessica Cruz. But can they work as a team well enough to be an effective fighting force?

HONOR THE LEGACY BY GETTING RID OF IT

After reading DC Universe: Rebirth, I was extremely intrigued with what DC was planning with their titles.  I like the talk made about legacy and DC Universe: Rebirth #1 even made a point of mentioning it multiple times. So I decided to take a look at Green Lantern: Rebirth #1 as I haven’t seen much out of the Simon Baz Green Lantern and know nothing about Jessica Cruz.  How would they mix with Hal Jordan and continue his legacy?  After reading the issue and talking with others, I came to an interesting conclusion about Geoff Johns and his Rebirth ideas.

The issue itself is a good introduction for new readers and even though there is history with Jessica that she mentions, it is nothing of much importance.  I like how unsure of herself she is, having just received the ring and undergone a trauma of some kind.  Since I don’t know the character’s background I can’t say what exactly, only that she is afraid of going outside and recently fought alongside the Justice League.  Simon Baz, on the other hand, is almost Jessica’s complete opposite.  He’s been around and is more confident.  The two get a call to inspect an extraterrestrial spacecraft and end up fighting a Manhunter.  Of course, they fail and it is actually Hal Jordan testing them to see how well they work together.  It was an interesting twist, albeit not that surprising.  What I found the most promising story element is the merging of the two’s Lanterns.  They will have to share it and be together to use it and I’m interested to see how that will play out later on.  It’s a good setup issue and I think new readers will find enough here to like to keep on reading.

Older readers on the other hand may feel this is treading old ground, and I can understand why.  With all the talk of legacy, it is interesting to see that the Green Lantern title is basically getting rid of Hal Jordan.  It seems to be a common theme with Johns as of late and it boils down to out with the current character, in with the new.  The first Green Lantern Rebirth jettisoned Kyle Rayner so Johns could resurrect Hal Jordan.  Flash Rebirth kicked Wally West to the curb so Barry could return.  His Teen Titans completely changed the lineup once he started writing.  Now, Hal is pushed aside for Simon and Jessica and Wally West returns again even though Barry looks to be speeding around still.  It’s something I didn’t notice about Johns’ writing until someone pointed it out to me, and it is certainly a pattern.  For all the talk of legacy, I would like to see more of the newer characters interacting with the old ones rather than replacing them.

Ed Benes and Ethan Van Sciver split art duties for the issue and it’s not hard to see the difference in styles.  Both are quite good but Van Sciver has intricate detailing and there is a certain look to character’s faces that I can’t quite describe, but it is obvious when you see it that Van Sciver drew it.  I’ve always found Van Sciver’s subjects to look too posed and static and it is as evident here as anywhere.  Just looking at the shot of Simon and Jessica summoning their power batteries and you can see Jessica’s over the top pose.  Benes fares better, for the most part, and luckily is the one to handle the action.  Unfortunately, there is an extremely jarring change in appearance from the first few pages to the middle portion.  The beginning has panels that look like Benes inked his pencil sketch lines, without cleaning it up first.  It’s so bad in areas that it’s almost like a third artist is on the book and it makes me believe that Benes might have had assistance while finishing his pages.  Still, the book works as a whole and generally looks good.

For those who haven’t read Green Lantern before, or lapsed readers like me, Green Lantern: Rebirth #1 is a good introduction into the new status quo.  There are new characters that you don’t need to know much (if any) of the history behind and some compelling elements that are presented.  The art is enjoyable overall, even with some of the peculiarities.  I’m eager to see how Sam Humphries handles the book on his own now that Johns has helped set things up.  Legacy or not, I’m probably going to start reading Green Lantern again, which makes this issue a success in my eyes.

A good start and introduction even though it jettisons the "legacy" character for his replacement.