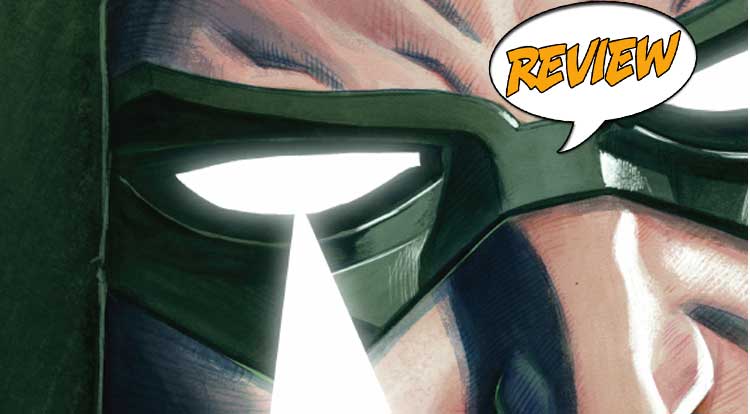 The beard is back!

What other changes are in store for our Emerald Archer?  Your Major Spoilers review of Green Arrow: Rebirth #1 awaits! Previously in Green Arrow: Oliver Queen is something of a ladies’ man, but lately he’s been haunted by the feeling that he already met (and lost) his soul-mate.  In the pages of Rebirth, both Ollie and The Black Canary experienced the strange sense of loss over a relationship they never knew.  What will the brave, new world hold for the man called Green Arrow?

We open in the streets of Seattle, with a young homeless woman and her son busking for whatever cash they can earn.  Oliver Queen, fresh off a disastrous date, gives them some cash, but the wind catches it and sends the young woman scrambling towards the sewer grate…

…where she is taken by SOMETHING.  (“We all float down here…”)  Later that same night, Green Arrow gets involved in a scuffle, discovering both the young homeless boy and the rock star/superhero known as Black Canary.  The two heroes team up to discover the truth behind the abduction, one of a series, while coming to terms with one another and the strange feelings they’ve been having.  There’s some canary cries, some gimmicked arrows, a nicely trimmed goatee and a lot of spirited back-and-forth between our finally reunited super-couple (in all senses of the word.)

Aside from the fact that I’ve always appreciated Oliver’s goatee and am quite gratified to see it back, I found myself enjoying this issue as it combined elements of the pre-Flashpoint (and even the pre-Crisis 1970s loudmouth liberal) Green Arrow with the trappings of the New 52, and it works.  There’s also some excellent art to be had (the splash-page shot of G.A. leaping down from a rooftop is stunning, and the page where Black Canary is revealed makes her look as good as she ever has in her new costume.)  With so much of the ‘Rebirth’ concept revolving around returning the sense of family and legacy to the DCU, restoring Oliver and Dinah’s relationship is a natural, and this issue gives us an official “first” meeting of the characters, a meet-cute that also involves a big fighty-fighty with a secret underground cult that is operating beneath the streets of Seattle, trafficking in human lives for unknown reasons.  Best of all, Green Arrow actually identifies himself as a Social Justice Warrior, a term which (while loaded, admittedly) encapsulates his “better the world with my money and with sharp objects” raison d’être.

THE BOTTOM LINE: A GOOD RESTART

So far, Rebirth is entirely in line with my expectations as a reader (which, honestly, has me worried, as I think I have atypical tastes) and this soft rebooting of the Green Arrow’s world and players has me interested in the character for the first time in forever.  Green Arrow: Rebirth #1 is a solid ‘coming attractions’ type story, establishing the character, his relationships, his city and giving us a new menace to combat, all the while strongly defining his character and giving back his beard, earning a very impressive 4 out of 5 stars overall.  If the entire Rebirth project is this solid, we are clearly looking at a new era of DC greatness…