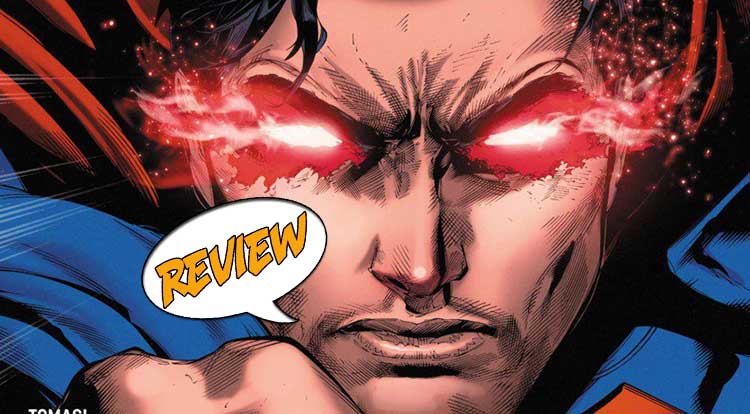 When Superman dies, who do you turn to? How about Superman? Not the New 52 one, the one with the mullet. Although, now he’s sporting a beard. Either way, someone has to step up to the plate as Major Spoilers reviews Superman Rebirth #1. Previously in Superman: In the final issue of Superman from the New 52, we witnessed the death of the post-Flashpoint Superman. Surrounded by all of his closest friends, Kal-El turns to dust after his final battle. However, minutes before this, he was plummeting down to Earth from the stratosphere, only to be caught just before impact by our new protagonist, the post-Crisis/pre-Flashpoint Superman (now might be a good time to start taking notes).

FOR EVERY DEATH, THERE IS A REBIRTH

Let me start by saying that I was a huge fan of the DC Universe Rebirth special that came out last week. Geoff Johns successfully brought the New 52 to a close while simultaneously tying in some much missed elements of DC’s past. As optimistic as it made me, I knew that Geoff Johns wasn’t going to be writing every title moving forward. In fact, he isn’t writing any. After reading such a carefully constructed story that achieved what many thought might be impossible, could the other DC writers follow suit? It’s too early for me to speak for all of them, but this issue of Superman was proof positive that Peter J. Tomasi and Patrick Gleason heard Geoff Johns’ message loud and clear.

Naturally, coming right off the heels of the death of the New 52 Superman, I expected that to be the focal point of this story, and it largely was. What I wasn’t expecting was such a vivid retelling of the Death of Superman storyline. This death at the hands of Doomsday was an iconic part of our old-but-new pre-Flashpoint Superman’s past, but was all but forgotten in the New 52. The purpose of this recap in the context of the story was for Clark Kent to explain to Lana Lang why he believed Superman could come back from the dead. If he could do it after his death at the hands of Doomsday, surely the New 52 Superman could come back in a similar fashion. However, when you look past the actual story, this portion of the book showed that Tomasi and Gleason were ensuring the overall message of Rebirth rang true. What once was lost has now been found. History that took place prior to Flashpoint is playing a proper part in the narrative of this story and is doing so without spitting in the face of everything that was established in the New 52.

As we approach the end of this issue, Clark begins to accept that the New 52 Superman is truly gone. Despite this, he is aware of the fact that the world still needs a Superman, which is what drives what is essentially a one-shot towards the proper issue #1 we will get later this month. I must say I was rather surprised that we got to spend so much time with Lana Lang but none with Lois or Jonathan. From the solicitations, it seemed as though Superman having a wife and son was going to be a very big part of his new status quo. While I’m sure this will be touched upon more as we get into the official first arc, a story that was supposed to set the tone for what we can expect from the character moving forward seemed like the perfect place to delve into this a little deeper.

The art in this book is absolutely sublime. Dough Mahnke provides super crisp, clean lines and his hatching and cross-hatching add stunning definition to every panel. In the Doomsday sequence, Mahnke renders Superman as a literal Man of Steel, a herculean force of nature engaged in fierce battle. The depiction of motion feels very real and we get a lot of visually pleasing panel layouts. I really appreciate how even in less action-packed panels, the striking features of each character still manage to shine through. Of course, credit also goes out to Jaime Mendoza and Wil Quintana. Mendoza’s inking adds to much of the aforementioned definition, creating a deeper sense of depth throughout the issue. Quintana, the Colorist, does an incredible job with his palette selection, particularly in the Doomsday and Fortress of Solitude sequences. Together, Mahnke, Mendoza and Quintana craft a very impressive visual story.

BOTTOM LINE: ON MY PLANET, IT MEANS HOPE

Superman Rebirth #1 was an incredibly strong start to Clark Kent’s new run. Tomasi, Gleason, Mahnke, Mendoza and Quintana all deserve equal praise for this brilliant new addition to Man of Steel canon. Some may argue that this issue was mostly set-up and didn’t have enough bulk. However, it’s important to remember that the actual issue #1 comes later this month. This issue did exactly what it needed to do and I finished reading this story with the same hope and optimism for Superman as I had for the DC Universe as a whole after reading the Rebirth Special last week.

This issue did exactly what it needed to do and I finished reading this story with the same hope and optimism for Superman as I had for the DC Universe as a whole after reading the Rebirth Special last week.