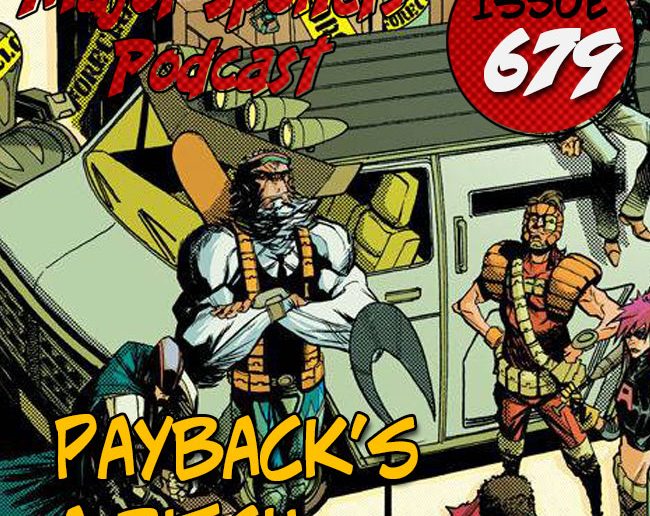 This week on the Major Spoilers Podcast: The Paybacks seems very familiar, but everyone agrees on DC’s Rebirth. Plus we review Fear and Loathing in Las Vegas #1, Charge #1, Bolts #1, and we get a great overview of Zodiac Starforce!

This comic book version is presented in black-and-white and at a slightly larger size than the full-color hardcover edition. Each issue also includes pages from Little’s sketchbook and other behind-the-scenes information.

36:14:00 ASHLEY
ZODIAC STARFORCE: BY THE POWER OF ASTRA Vol 1
Writer: Kevin Panetta
Artist: Paulina Ganaucheau
They’re an elite group of teenage girls with magical powers who have sworn to protect our planet against dark creatures . . . as long as they can get out of class! Known as the Zodiac Starforce, these high-school girls aren’t just combating math tests. They’re also battling monsters–not your typical afterschool activity! But when an evil force from another dimension infects team leader Emma, she must work with her team of magically powered friends to save herself–and the world–from the evil Diana and her mean-girl minions! From Kevin Panetta (Bravest Warriors) and Paulina Ganucheau (TMNT: New Animated Adventures, Bravest Warriors), this super-fun and heartfelt story of growing up and friendship–with plenty of magical-girl fighting action–delivers the most exciting new ensemble cast in comics!

“What’s the worst that could happen?” Budget cuts, layoffs, deadlines, stale donuts… Jenson and Hobbs thought things couldn’t get worse at Comtech. Until they found themselves stranded on a mountain in a snowstorm, where they witness an industrial accident that brings forth a mysterious army from the unknown.

1975: trapped in a remote mountaintop research facility, scientists Jenson and Hobbs have made an amazing discovery. Just not the one they planned on. Now they must survive the night, and avoid being caught up in a future war between militarized corporations. And all before the machine’s next CHARGE. Dan Jury and Chris Jury craft a gripping story about the invention of time travel and the fight to survive it.

44:45:00 RODRIGO
BOLTS #1
Writer: James Whynot
Artist: James Whynot
During a brutal attack by townspeople in his own time, Frank is torn apart and loses his memory. Only to have his mangled body pieced back together and thrown into a new and strange dimension where he crosses paths with Casey, a scavenger with a penchant for trouble. Now the two must face merciless monsters and perilous roads, while Frank fights his own battle to become a righteous hero or spiteful villain!
Bolts is Frankenstein’s monster like you’ve never seen him before from rising star James Whynot! Includes a variant cover limited to 1500 copies

57:00:00 DISCUSSION: The Paybacks Volume 1
Heroism doesn’t come cheap, so when superheroes borrow money to finance their genetic enhancements or crime-fighting supercomputers, their debts make student loans look like IOUs. Enter the Paybacks, a repo squad composed of bankrupt former heroes here to foreclose on everybody’s secret lairs! Collects issues #1-#4 of the superhero comedy series from the team that delivered the acclaimed Buzzkill!