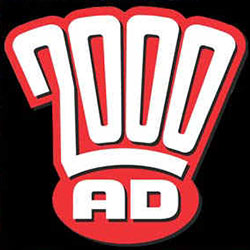 What would happen if a failed Martian invasion lead to Britain dominating the world? That is the hook behind Cold War from Ian Edginton and Matt Brooker’s Cold War from 2000 AD.

Scarlet Traces took place ten years after the abortive Martian invasion of Earth, with reverse-engineered alien technology allowing Britain to dominate the world. But when women’s bodies were washed up on the banks of the Thames, a retired soldier and his trusty manservant discovered a dark plot to strike back at the Martians – a plan with devastating consequences for them and then for their world 30 years later.

Set in 1968, Cold War sees a diminished Britain outpaced by its rivals and dealing with an influx of Venusian refugees fleeing the Martian invasion of their planet. As the nation falls into racist acrimony, the Royal Air Force’s Ahron Shakespeare, a first generation Earth born Venusian and an engineer, and flamboyant human/Martian hybrid, Icarus, uncover diabolical Martian plans that could mean the end of all life on Earth.

“Matt and I always intended to return to Scarlet Traces,” said Ian Edginton.  “I knew that there were a lot more stories to tell, both prequels, sequels and sideways! We’re following British and world history as it actually happened but it’s also how it’s been warped and distorted by cultural and technological changes brought about by the original Martian invasion in War of the Worlds, Earths invasion of Mars in Scarlet Traces and The Great Game and now the Martians occupation of Venus in Scarlet Traces: Cold War. We keep jumping ahead in twenty year increments and see how far these ripples have spread. I’d also like to go back and chart what happened between War of the Worlds and the first Scarlet Traces series and if possible explore the origin of what we think of as the Martians and their invasion of Mars millennia beforehand.”

Next year, 2000 AD plans on publishing a new collection of Scarlet Traces, while Cold War arrives on July 6, 2016.