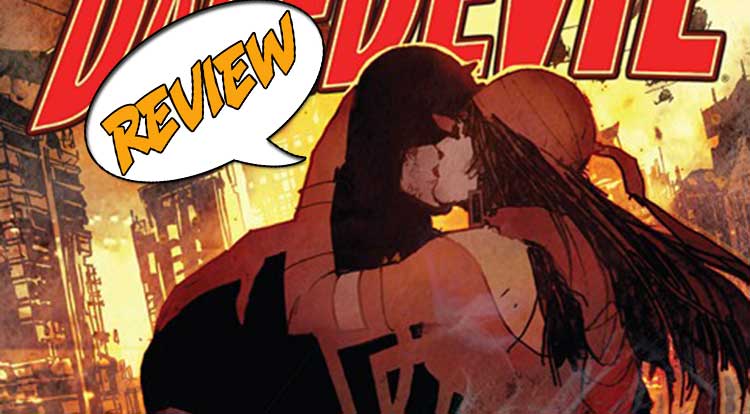 Previously in Daredevil: Daredevil has faced many challenges in his tenured career. The Kingpin, Bullseye, the Hand; but last issue, we saw Daredevil go head-to-head with the former love of his life, Elektra Natchios. The issue ends with the shocking revelation that not only does Elektra have a daughter, but that she believes Daredevil is responsible for her disappearance.

A BLIND DATE IN HELL’S KITCHEN

This issue picks up right on the heels of the cliffhanger from issue #6. The dialogue between Daredevil and Elektra is very true to what readers have come to expect from these characters, especially when you factor in the opening action sequence. One of the distinguishing qualities of Daredevil books is the titular character’s inner-monologue, and Charles Soule’s scripting of these trademark texts blocks is executed perfectly. We get a flashback scene that elaborates more on Elektra’s daughter, Iona, that retroactively places her into existing Daredevil continuity in a way that doesn’t feel ham-fisted or forced. Like any good retcon, it’s easy for the reader to accept that this previously unknown aspect of Elektra’s life is in fact canon based on the way Soule presents it.

We get several pages of Matt Murdock out of costume as he pays a visit to the Offices of Franklin P. Nelson, Attorney-at-Law. Here, we are once again reminded that Matt did something to cause everyone aside from Foggy to forget that he and the Man Without Fear are one in the same. This has been touched upon a handful of times since issue #1 but Soule is definitely playing the long-game when it comes to one of the biggest unanswered questions in the post-Secret Wars Marvel Universe.

There is further development in the relationship between Daredevil and his sidekick, Blindspot, who had his arm broken by Elektra in the last issue. Unlike their Distinguished Competition, Marvel has never relied to heavily on sidekicks for their heroes. That is what makes the dynamic between Daredevil and Blindspot so enticing. I just wish we got to see more of it in this issue.

In the end, we learn that Elektra was actually brainwashed into believing she had a daughter and Daredevil realizes that someone used Elektra as a tool to target him. Though it isn’t revealed who this mystery person is, Daredevil seems to know and I would imagine that by the next issue, we will learn who the big-bad of this arc is. Based on the context of Daredevil’s monologue, perhaps it’s someone we already know from the Marvel Universe.

After a superb run by Ron Garney on the first arc, I was a bit disheartened to learn that another artist would be taking over. Matteo Buffagni is not an artist I have a ton of familiarity with but I must say that I’m more than thrilled with his work thus far. From the new costume to the unique palette choice, Buffagni has taken the framework that Garney laid in issue #1 and added his own personal touch. Often times when books switch artists, the stylistic changes can be drastic and sometimes even cause readers to drop off of altogether. Buffagni, on the other hand, provides a cleaner interpretation of what has proven to work for the characters in this book and for the story being told. I’m not a huge fan of the palette selection for Daredevil’s radar vision as I find the bright oranges and greens to be a bit distracting but overall, I’m happy with all of the other artistic choices. The fact that the overlaying tone changes with each scene really helps to visually establish the progression of the story and pairs beautifully with Soule’s writing.

After an iconic run on Daredevil by Mark Waid and Chris Samnee, Charles Soule had some big shoes to fill. Issue #7 is Soule’s seventh example of proof that he is more than capable of living up to the challenge. He has taken everything that works from not just Waid’s run, but also Miller’s and Bendis’, and combined it into a style gives us the most visceral and ideal version of the Man Without Fear. I feel like the missing daughter plot could have played out over more than just a single issue and part of me feels like the payoff was weak. However, there are seeds planted for what will come as this storyline progresses and like I said before, Soule is playing the long-game, so I can’t wait to see what comes next.

After an iconic run on Daredevil by Mark Waid and Chris Samnee, Charles Soule had some big shoes to fill.