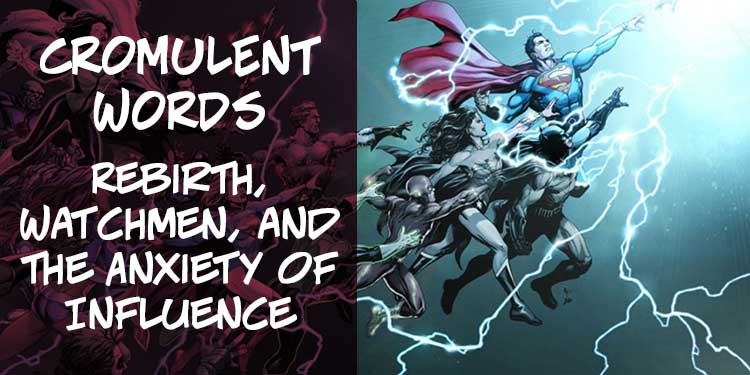 (Warning: Major Spoilers – and an Ookla the Mok reference – ahead)

As a young comic book reader, I was constantly asked some iteration of the “Who would win?” question. “Who would win in a fight: Spider-Man or Batman?” “Is Superman stronger than the Hulk?” “Could Logan’s claws pierce Steve Rogers’ shield?” As I got older, those questions were replaced with more meta-narrative questions like “Marvel or DC?” or the perennial, “Alan Moore or Grant Morrison?”

Both Moore and Morrison are great writers who have contributed mightily to comic book history, most specifically to the DC Universe. While I think that Alan Moore is technically a more gifted writer, I prefer the work of Grant Morrison. This is primarily because Moore’s super-hero narratives seek to deconstruct heroes, showing their flaws and weaknesses, while Morrison’s super-hero narratives celebrate heroes as mythical archetypes. Moore drags the heroes down to our level, so we can get a good look at them and see what makes them tick, while Morrison holds up the heroes as humanity’s aspirants. Moore seeks the darkness within the light, while Morrison finds the light inside the darkness. Moore famously quipped that the tone of all modern comics is based on a bad mood he had in the mid-80s, and he’s not far off. Moore’s narrative influence simply cannot be overstated. Even a writer as established, popular, and well-regarded as Grant Morrison cannot escape this influence – indeed, even his surname conspires against him, as it is derived from “Moore’s son.”

Like many writers of super-hero narratives from the early 21st century, Geoff Johns (the writer of DC Universe: Rebirth) appears to exhibit an anxiety of influence stemming from both Moore and Morrison. While the urge to celebrate the heroic – and the fact that all of his stories have a genuine emotional heart – indicate a Morrisonian influence, one of the trademarks of his work is unexpected – not to mention outrageous and unnecessary – violence. (When Johns teamed up with Morrison, Mark Waid and Greg Rucka to write the weekly comic 52, identifying which storylines were written by Johns was simple: look for the ultra-violence. Did Black Adam just tear a guy in half for no reason? Did an alligator just eat a young boy, over the course of several panels? Must be Geoff Johns.)

DC Universe: Rebirth opens with a clear homage to Alan Moore and Dave Gibbons’ Watchmen. The page is laid out in a familiar nine panel grid. We begin with an establishing shot – the face of a watch, just in case the panel construction alone didn’t clue you in – and zoom in closer over the nine panels, so by the final panel, we are looking at a close-up of the watch’s inner workings. Watchmen looms large over the comic book industry, but its shadow has inadvertently kept super-hero comics in the dark since the mid-80s. Watchmen is justly praised for its endlessly intricate script and innovative art, but – like so many works of true genius – lesser artists were only able to imitate the surface of Watchmen, so instead of getting a string of brilliantly rendered, complex narratives, we got decades of nihilistic stories about people in super-hero costumes doing really horrible shit to one another.

Of course, this influence was felt most powerfully in the DC Universe, if only because Watchmen was a DC property. Even before DC found the courage/shamelessness to ask other creators to work in the Watchmen universe, Watchmen’s influence was out there – asking readers to question whether ideas like “Truth, Justice, and the American way” (or even kindness) were “realistic” – so it makes a strange sort of sense to begin Rebirth with an overt reference to the elephant in the room.

But by page two, the Watchmen reference is all but forgotten, as the narrative moves on, and reader is busy trying to determine who the narrative voice belongs to. The faithful readers will no doubt suspect that it is Wally West long before the full-page reveal on page 6 launches us fully into the story. Geoff Johns has been the primary architect of the DC Universe for over a decade now, and was the author of Flashpoint, the event that led to 2011’s New 52 relaunch. With Rebirth, Johns (through Wally West, a character until now entirely absent from the New 52 continuity) appears to be returning to that narrative in an effort to “fix” the continuity changes it brought about.

The story is fairly simple: Wally is trapped in – and desperately trying to escape from – the Speed Force. Every few pages he manages to appear briefly before a different key character, only to have that character reaffirm that they do not remember him, sending him back into the Speed Force, weaker than he was before. As this narrative cycle continues, Wally monologues about his plight, providing readers with important past story points.

It’s not much of a plot, but Rebirth isn’t about plot. It’s about tone, meta-narrative, and the anxiety of influence. Through Wally, Johns reveals that there is some sinister Big Bad out there manipulating events, whose identity – and existence – is hidden from everyone. From outside the NEW 52 continuity, Wally notices that the relaunch not only stole years and experience from our characters, but also important relationships, especially romantic ones. As a result, not even Linda Park (Wally’s wife and his “anchor” whose love allowed him to enter the Speed Force at will, knowing she could always bring him back) remembers Wally.

With time running out, Wally and Barry Allen have an emotional encounter, where Barry finally remembers. After Barry Allen rescues Wally from the Speed Force, they speak in depth about the enemy they face, and the battle to come. Things are getting kind of meta in here…

And then I filled my Superman Underoos right up to the yellow line. How much would you pay to see the heroes of the DC Universe fight Alan Moore?