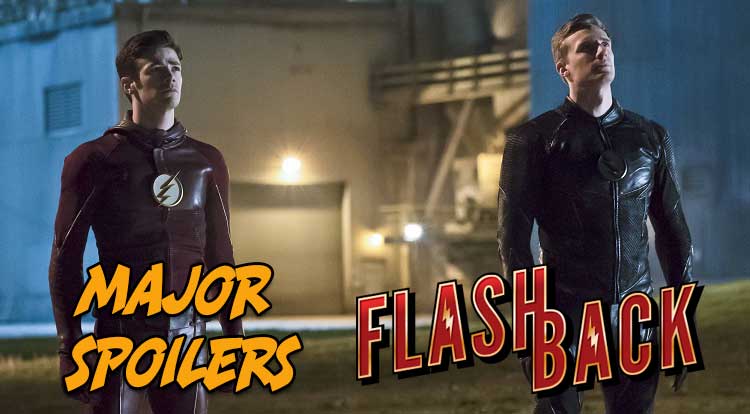 It’s a race for your life, Charlie Brown… uh Barry Allen. The season two finale has arrived, and we take a look at some of the comic book connections to this week’s episode.

After Zoom reveals his true plan, Barry vows to do whatever it takes to stop him.

This episode opened with the funeral for Henry Allen, a big loss for everyone in Barry’s life. The Speed Force was attempting to tell Barry that if he was going to be a hero, he would have to deal with people he loved dying. I wonder if the Speed Force knew the death of Henry was imminent and was helping to prepare the speedster for the event.

The Speed Force definitely has some weird properties beyond being able to send long distance calls from one Earth to another:

Creating Speed Scouts is a very interesting power, as it allowed Bart Allen to create Speed Force duplicates of himself that can travel backwards and forwards through time. They can manipulate objects, and they can die. While Speed Scouts are a Bart Allen power, it certainly sounds a lot like Time Remnants to me.

WHO IS THE FASTEST MAN ALIVE?

In the comics, Wally West (the greatest Flash of them all) raced against Zoom in The Flash #198 – #200 written by Goeff Johns with art by Scott Kolins. In the 2003 arc, “Zoom attacks Wally, believing that The Flash can only be a better hero by experiencing ultimate sorrow.”

That certainly sounds like Zoom from this episode, right?

The issue also featured Jesse Quick, Jay Garrick and Impulse, all who showed up in this week’s episode. What, you think Wally will go by the name Kid Flash? His actions since his introduction of the series have always been done on impulse, and it would not surprise me if that is what happens next season.

Zoom wants to race Barry, not only to prove who is the fastest man alive, but also to power up a magnetar stolen from Star Labs. In the real world, a magnetar is a special kind of neutron star, that has magnetic rating of 1 quadrillion gauss. According to Paul Sutter, a research fellow at the Astronomical Observatory of Trieste, if you stand next to one, “you just kind of… dissolve.”

In Crisis on Infinite Earths, the Magnetar is known by a different name, the Anti-Monitor Cannon. While George Perez may have a different interpretation take on the doomsday device, the end result would have been the same – the end of everything. In the maxi-series Barry Allen makes THE ULTIMATE SACRIFICE by creating a speed vortex to draw the power of the Anti-Monitor Cannon in, but dies in the process. In season one, Barry discovers a newspaper from the future that indicates The Flash disappeared during a crisis where the skies were red. As the Magnetar powers up, the skies do indeed turn red, and by the end of the episode, the Flash really could be gone. Barry’s plan to cheat death by using a Time Remnant, getting the Time Wraiths to intervene, and have them cart Zoom off to the Speed Force was a gamble that paid off (even if it meant a lot of flashbacks to previous episodes, and spending a lot of time foreshadowing what was to come). As the Time Wraiths carry Zoom away, his costume and face changes to that of the Black Flash.

In comics, the Black Flash is a representation of Death for speedsters. Introduced by Grant Morrison, Mark Miller, and Ron Wagner, the Black Flash did appear before the deaths of Barry Allen and Johnny Quick (in retro continuity), in The Flash #138 – The Human Race in June 1998. The Black Flash would appear in 43 issues of The Flash before finally exiting in June 2009.

In Flash: Rebirth, upon discovering the remains of the Black Flash following its confrontation with Darkseid, Barry Allen begins to convulse and transform into the new Black Flash. Barry soon starts killing other speedsters through their connection to the speed force.

Ultimately it is discovered that Professor Zoom was behind Barry’s transformation into the Black Flash. No, really. This character’s appearances and interaction with speedsters is more convoluted than Barry trying to explain to everyone how you create a time remnant version of yourself.

THE MAN IN THE IRON MASK

As predicted during our discussions on the Flashback Podcast, the Man in the Iron Mask is indeed the real Jay Garrick from Earth-3, played by John Wesley Shipp, the actor who first donned the Flash costume in the 90’s television series. The big problem, however, is The Flash of Earth-3 is Johnny Quick, an evil speedster. Did the creators set us up for another father betrayal and villain reveal for season three? Considering the television Earth-2 was the reverse of our expectations (left hand/right hand, good/evil), it would be very surprising if the creators introduced another Earth that turned out to be evil as well.

Earth-3 was introduced by Gardner Fox and Mike Sekowsky in Justice League of America in 1964. On that Earth, everything is indeed reversed; President Booth was shot by Abraham Lincoln, Christopher Columbus was an American and discovered Europe, and the Crime Syndicate of America ruled all.

Earth-3 has been rebooted and retooled over the years, and Johnny Quick’s history is just as convoluted.

In the antimatter universe, Johnny (Wally West’s counterpart) receives his powers by injecting himself with a drug called “Speed Juice”. He is hopelessly addicted to it and goes into massive physical withdrawal without it. As part of the Tribute the world’s leaders present the Crime Syndicate with on a regular basis, they supply Quick with fresh supplies of his drug, sometimes altered to be more euphoric. His real name is unknown.

Johnny had a predecessor (Barry Allen’s counterpart), whom he killed and whose blood was used to create the drug. In Justice League of America #51, Jesse Chambers says “This Johnny Quick has my father’s face”, implying that the name is more than coincidence and that her father and the former Antimatter Johnny Quick (Barry Allen’s counterpart) are genetically the same person.

So yeah… I don’t think we’ll see the creators go down that road again.

If you were wondering when Barry would travel back in time to stop his past self from saving his mother, this episode brought the season full circle and by changing the past; Barry has created ripples that will no doubt have consequences next season.

In Flashpoint, Barry went back in time to stop his mother’s death, and in the process rewrote the DC Universe history. Elements of the Flashpoint series were scattered throughout the season, and seeing this moment in the episode feels like we are going to see a huge change next year. Flashpoint lead to the New 52, a retooling of characters and histories in DC Comics, which was just undone this week in the pages of DC Universe Rebirth #1. It feels odd that Flash, a generally happy and optimistic show, may be getting a dark turn next season, while the darker DC Universe seems to be flipping to a happier place in the comics. Comics and their media versions never seem to be on the same page with one another, and the conclusion to this week’s episode reinforces that problem.

Changing the timeline is a big deal. Without the death of Nora Allen, Henry’s imprisonment, and adoption by Joe West, Barry would never have become a CSI, would never have been in the lab when the particle accelerator exploded, and would never have become the Flash. Will we see that happen next season? Will we spend countless episodes where Barry attempts to gain back his powers (again)? Will the Time Wraiths seek revenge for Barry’s altering of the timeline? Will all the dead villains return to plague The Flash? Zoom’s transformation into the Black Flash at the end of this episode may indeed be an indicator of things to come. Or maybe the villain of season three will be Cobalt Blue…

Who is Cobalt Blue? Well, we can have that discussion next season! See you in the Fall!

That’s it! That’s the season! The list grew very long this year, hopefully, next season, the list will grow at a crawl. Or maybe it will be erased completely…