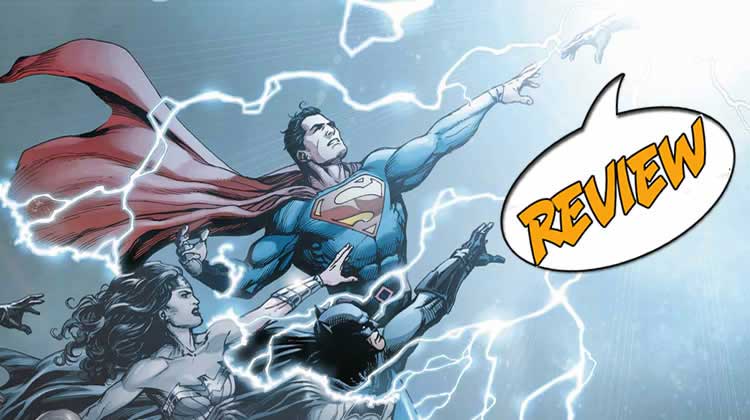 When I was growing up, I loved 80-page Giants! In those days, these books cost like a quarter and were reprints from 5-10 years earlier. But I hadn’t read them, so I pored over each and every story! It was an adventure into tales I hadn’t read before, but still grew to love.

DC Universe: Rebirth #1 is a lot like those wonderful comics. There’s a LOT going on, some of it touching on recent comics stories, others going back into previous DC storylines I enjoy remembering.

Previously in DC UNIVERSE: REBIRTH: It all begins here. Do not skip to the last page. Do not let a friend or message board ruin this comic for you. The future (and past) of the DC Universe starts here. Don’t say we didn’t warn you!

Honestly, there’s no way I could cover all the things that take place in this issue. So let me hit what I consider the highlights.

As pointed out in this recent article here at MajorSpoilers.com, a beloved DC hero is struggling to return to the DCU, and we now know it to be the original Wally West. Someone once referred to Wally fans as “Westies,” but I don’t know if they like that name or not. They certainly remain a devoted bunch! Anyway, Wally attempts to reach out to first Batman, then others in the DCU in an attempt to return from the Speed Force. He’s the narrator at the beginning of the issue.

After several attempts, he reaches out to Barry Allen. However, he’s not seeking help any longer – he wants to say his goodbyes. This is all complicated by the fact that there’s another Wally West in the current DCU. But after spending many pages focusing on Wally, I was pretty happy with how this all turned out. Let’s just say that for those folks who have missed him, there will be a lot of Wally West in the DCU from this point on.

The book itself begins with a story about a watch, one that had been handed down for generations. That ties heavily into the Epilogue, which harkens back to a DC miniseries (now graphic novel) that also highlighted a watch or a clock. We’re now on Mars, and a famous work by Alan Moore is quoted there, about how nothing EVER ends. Then I looked at the cover of this book and finally noticed that the hand reaching towards the heroes was actually blue, and what Batman discovered in the Batcave made abject sense. However, I doubt that Mr. Moore will be happy about it! Still, I liked it!

It’s important to note that readers are requested to have Justice League #50 and Superman #52 under our belts before reading Rebirth #1, and I can certainly see why. A lot of the things that happen in those books (well, at least in Justice League, which also was released today) are referred to, so I’m glad I followed that suggestion!

Since Mr. Johns is likely to be busy with movies and TV for a long while to come, I’m glad he’s penning this reset of the DCU. I have always liked how Johns can take what seem to be disparate items and weave them together, much as he did with Hawkman. He does a lot of that here as well, with cameos by Aquaman and Mera, Swamp Thing, Johnny Thunder, Ted Kord and Jaime Reyes, Ray Palmer and Ryan Choi, Green Arrow and Black Canary, and others.

I liked the simple chapter titles, all starting with the letter “L.” First “Lost,” then “Legacy,” then “Love,” and finally, “Life.”

Does it all make sense? Well, it really helps to have read DC over the years as I have. When Johnny Thunder calls out, “CEI-U, Thunderbolt!” there’s no explanation of why that’s happening. A lot of other things happen like that, which delighted me. For readers who aren’t familiar with the characters being portrayed, they’ll need friends who know DC or a good Internet connection so they can look a lot of it up! It’s worth your time to do that, however! Then, too, I imagine future issues will help fill in the gaps! Still, Johns does a great job of juggling all these different balls in the air – better than many others might!

I truly enjoyed it, but I’m a long-time DC fan. Where the various characters are going, I’m not certain, but I’m anxious to see what’s coming next! I’ve missed some of these heroes and other characters, so I’m looking forward to future issues.

A lot of the artists involved with this book have worked with Mr. Johns in the past, and they do their usual sparkling-good job here. I worried that the various styles wouldn’t gel together, but I thought they flowed well from page to page.

There’s a very touching moment between Wally West and Barry Allen that just caused me to choke up! The Flashes have shared many experiences together, and I thought the page with that encounter was superb!

The colors were strong, with Batman’s cave dark and blue while the Flashes had a lot of bright yellows and reds. Of course, there were a lot of variations in the color choices depending on the characters, which I felt were excellent and certainly most appropriate.

I was at a local comics shop at midnight when the books were put on sale. They had a great turnout, with a lot of the store filled with customers anxious to get this issue and the other books on sale. They even served pizza and soda, which helped some of us stay awake at that time of night! Variant covers flew off the shelves!

I know that not every store was able to open at midnight, but from what I’ve read online, there were a lot of good turnouts at the shops that participated.

Is it close to The New 52’s reception? I don’t think it’s going to be as overwhelming as that event was, but as a DC fan I was heartened to see so many out during a weeknight to get into a reset of the DCU.

If you’re a DC fan who has read their product for years or a recent fan, I recommend this title! Also, if you are curious about the DCU and want to experience where they’re going as they move forward, again I suggest you get on board. Hey, 80 pages for $2.99? I loved it! I expect many comics fans will like what they find there as well!

The only fault I find is that readers who are not long-time DC fans will be somewhat lost when various characters appear.