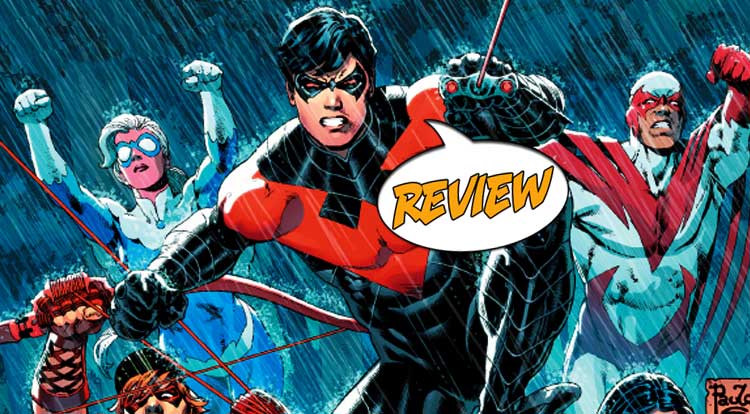 The puzzle is almost complete, and the Titans are recalling their lost history, but…

Wasn’t there ANOTHER Titan?  Your Major Spoilers review of Titans Hunt #8 awaits!

Previously in Titans Hunt: From beyond the veil of reality, the strange entity called Mister Twister has manipulated the minds of nine young people, seemingly unrelated superhumans who nonetheless vaguely remember him and each other.  But why did they force themselves to forget?

More importantly, WHAT did they force themselves to forget?

Simple answer: An inhuman monster from beyond.  The various Titans have remembered what happened, and as they have, Mister Twister has gained more power, using his influence to force Mal (The former Herald) to use his powers to open a portal, letting Twister’s Master through.  The former Teen Titans finally assemble, and the arrival of Karen Beecher, Mal’s wife, leads to the revelation that Twister can be hurt.  The Titans raise arms and fight, but find themselves falling under the control of Mister Twister until Nightwing reminds him: He’s not Robin anymore.  Roy isn’t Speedy, Garth isn’t Aqualad.  None of them, save for Hawk, are the children they once were (and Dove and Karen were never under his control.)  Of course, Hawk has his own way to break free, remembering for the first time that Mister Twister is the one who killed his partner and brother, the original Dove.

WHO IS THE MISSING TITAN?

Nine heroes united in their new adult selves, combined with Hawk’s brutal rage and Mal’s sonic powers turn the tables, and Gnaark the former Cave Boy comes to the realization that what’s truly necessary is a sacrifice.  It’s a  solid climactic battle, after which Karen goes into labor and the Titans wonder if they should stay together and continue being a hero team to keep the entity from attacking again.  And, of course, the unanswered question: Who was the lost Titan?  (Those who pay attention to rumors and spoilers may have a few hints, but with Rebirth on the horizon, it won’t remain a mystery for long.  This issue takes a step down in art with penciler Paul Pelletier replace Paulo Siquiera, with Pelletier’s rounder faces and bloopier design never quite as sharp as previous issues.  Thankfully, the inking and coloring offset much of that, leaving us with a good-looking issue overall, just not as good-looking as the first three were.

THE BOTTOM LINE: A STORM ON THE HORIZON

Knowing as we do that the Titans will be returning to action as a team in coming months, this series serves as a perfect launching point for the new era (albeit one that I hope doesn’t have Nightwing sporting devilish red eyes.)  I hope that we get more Karen, more Donna Troy and perhaps a bigger role for The Dove, but overall, this book has done a great job of putting the Teen Titans back on the map as an entity.  Titans Hunt #8 is a good climax, tying into the upcoming crossover effortlessly, delivering strong plotting and dialogue, mostly okay art and the promise of more Titans in the future, earning 3.5 out of 5 stars overall.  Maybe I’m a sucker for the Teen Titans, but this issue is the closest thing we’ve had to classic Titans since about 2007, so I’m happy to see it done well…

The answers are revealed, but one Titan is still unaccounted for, and the art takes a slight step down from previous issues...