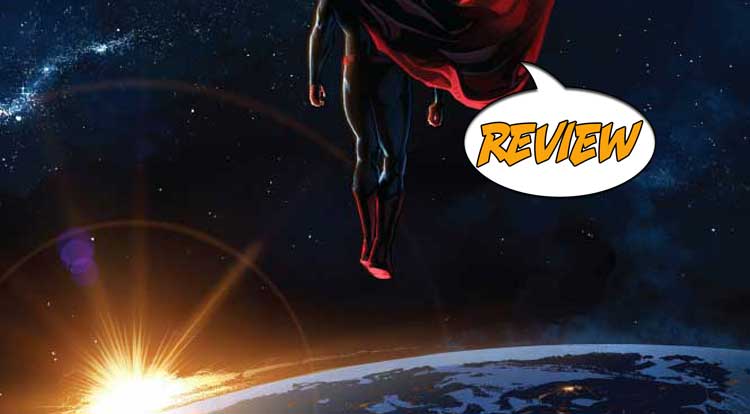 The series that always gets that Green Day song stuck in my head comes to a close, but what will this mean for the Man Of Steel?  Your Major Spoilers review of Superman: American Alien #7 awaits!

Previously in Superman: American Alien: Young Clark Kent has moved to Metropolis and established himself as the protector.  He has also become a successful reporter and begun a tentative relationship with Lois Lane.  Unfortunately, he also accidentally told her he loved her, leading to a quietly awkward moment and leaving our Man Of Steel emotionally shaken.

Time to get physically busted up as well!

THE VERY WORST OF LOBO

We open with Clark on the subway, texting Jimmy about his disastrous admission of amour, only to find the conversation interrupted by a decidedly unnatural disaster; the arrival of an alien known as Lobo.  (For detractors of the new-look New 52 Main Man, this is a classic, scruffy, cigar-chewing, snarling tough-guy Lobo, who quickly goes through his usual array of offensive and confrontational remarks.)  Shaken by Lobo’s actions (a building full of innocents is dead by his hand), Superman is uncertain about how to proceed, and as the Last Czarnian spills the beans that he is, in fact, the Last Kryptonian, our young hero is even more shaken.  Mocking Superman for his compassion, Lobo asks how he thinks Metropolis is going to feel seeing their protector fall, to which Superman responds, “Probably not as shocked as they’ll be when I take that fancy bike of yours and shove it up your…”

A SOLID LAST PAGE, BUT…

This, by the way, is the first words that Jimmy Olsen is able to broadcast to the world at large, just before the aliens launch into a super-powered Pier 6 brawl that lasts most of the rest of the issue.  There is a lot of likeable, approachable stuff to be had in this comic (“I’m from Kansas” and the end of the Lobo fight stand out as top-notch storytelling) but it really boils down to a big ol’ fight sequence, featuring a young tough-guy Superman with some sass and brutality thrown in for good measure.  Anywhere else, this would make for a pretty okay issue, but as the wrap-up to a series that has set the bar so high, it feels a bit anti-climactic.  I enjoy Jock’s art, but I really feel like it’s ill-suited for a Superman comic, and many of the lovely moments of the issue (including Lobo going for Superman’s eyes, only to get his thumbs disintegrated by heat-vision) are solid, but it doesn’t really feel like a final issue to me.  After the battle, we find Clark Kent hospitalized, and get a truly Lois/Clark moment to close out the story, but even that feels a bit abrupt.

THE BOTTOM LINE: DOESN’T QUITE GEL

There’s a lot to love in this issue, but it never quite gels into an issue as cohesive as the earlier volumes of this series, and it doesn’t really succeed as a final chapter for me.  The last scene is a clear sequel-hook for more stories in this version of Metropolis, though, which is in no way a bad thing.  Max Landis has a strong ear for dialogue (even if his Superman doesn’t quite sound like the Superman I know) and nearly every scene in the issue works dramatically of itself.  The form and structure of the issue is another story, though, leaving Superman: American Alien #7 with a still-better-than-average 3.5 out of 5 stars overall.  I hope there is more to come in this particular corner of the Super-world, even with the rough edges.  (That’s assuming Rebirth even leaves such an option open…)

A lot of strong pieces that don't quite cohere into a complete picture, with a nice emotional close.