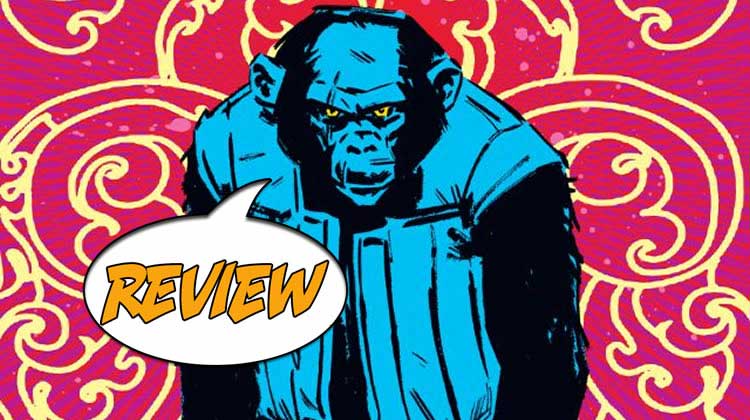 There’s nothing better than a book that challenges my thinking while engaging me visually. Great plot, great art … it’s a combination that sends me to the comics shop every week!

A perfect example of this is the ongoing series of graphic novels called Guerillas from Oni Press. This week, the third of the four books in the series hit the stands, and was it great!

Previously in GUERILLAS: Deep in the heart of darkness, Private John Francis Clayton has fallen in with a troop of black-ops trained chimpanzees during the Vietnam War. As this strange squad fights for survival through the damp jungles of Southeast Asia, it becomes unclear if the chimps that soldier John Clayton has joined are a stable fighting unit, or an erratic and volatile pack of animals… . On their tail is one of the scientists responsible for this strange operation. Discover the secret origins of Adolf, Goliath and the rest of the simian squad as Dr. Heisler struggles to regain control of an increasingly dangerous situation in the jungles of Vietnam. When the land itself turns against the troops, death and destruction will follow in their wake.

One of the greatest puzzles for humanity, as long as we have existed, is war. Why do we do it? What do we endure while it happens?

Guerillas, from its start in Volume 1, has examined this subject from many angles, including comparing humans to their animal relatives. For instance, we have the chimpanzees in a group as well as a human pack trying to find them. We can compare and contrast between the two sets, and I have found it quite the learning experience. Inhumane? Yes. Difficult? For sure.

All this takes place in Vietnam, a difficult time for the world. We were beginning to see that less-than-noble aspects of war there. The timing is interesting since Morley Safer recently passed, and it was a report of his that showed us the darker side of this endeavor during that same war.

Like the humans, each gorilla/monkey/chimpanzee has a different personality. From Goliath to Goblin, they look at things differently. They also have similarities in that they all have come to treasure smoking cigarettes, a real-life happening according to the author. We come to understand them better than many comics characters, and when one passes in the second volume, we feel the loss. The chimps continue to deal with that passing in this volume. I was touched by Goliath’s reaction, honestly. It’s interesting that both the chimps and the humans have lost a member of their individual groups.

This volume combines flashbacks with what’s taking place in Vietnam. We learn a lot about how the chimps were trained by the Heisler twin brothers, and we see how one of them views the rest of humanity when it comes time for villagers to be interrogated by the human group. Let’s just say that he doesn’t put the “humane” in “humanity.” There are also some fantasy sequences, so the line between reality and fantasy is blurred at times. Just pay attention as you’re reading and I think you’ll know what’s what!

We also explore what happens when religion intermingles with science. One of the woman villagers laughs at the men trying to find the chimps. We discover that she thinks Shiva, one of her gods, is having his fun at their expense, and that “We are ALL already dead!” Gripping writing!

I wanted to also mention that Oni Press has helped this series make it to the local comics shop. If you are looking for reading that’s something different, please check out their product!

Granted, this volume, like the two before it, is black and white or grayscale rather than full color. But once I get into reading it, I forget that since a lot of what’s happening is gray with lots of blacks and whites in nature. It’s ideal for this story!

There’s a lot of use of blank/black pages to communicate different emotions as well, so Guerillas is artistic in nature. Both emotion and action are also strongly portrayed, so I couldn’t put the book down once I started. It’s a very powerful portrayal of the tale.

I remain so impressed that Mr. Revel handles basically all aspects of the art as well as the writing! Wow!

There are a couple of things to keep in mind when considering Guerillas. First, this is the third of the four-volume set. I would highly suggest you read the previous books before diving into this one. However, there is a recap as well as indications as to who is who in the early pages of this book.

Second, as I mentioned, there is another volume to go. This particular book is giving us background on many of the characters as well as moving the main story forward.

When the announcement was made that this third volume was coming, I interviewed Mr. Revel for my Wayne’s Comics Podcast. You’ll discover a lot of interesting things about this series if you’ll listen to that episode at this link.

It may be some time before the final volume is completed, so hold on to your hats! I recommend you jump on board now so you’ll be prepared when the finale comes. If the first three books are any indication, it’ll be well worth the wait!

Guerillas is a profound, high-octane examination of war!