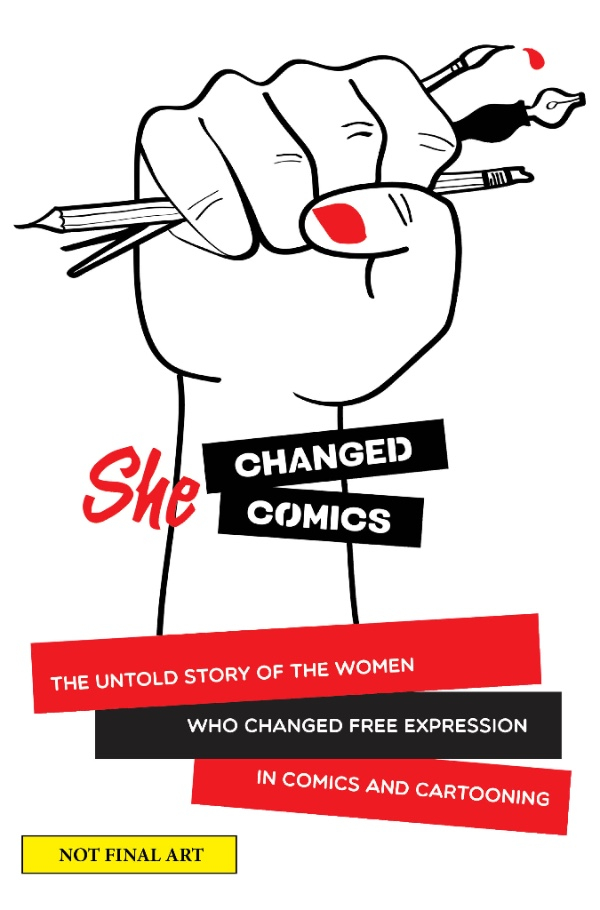 [Solicitations] Image Comics and CBLDF team for She Changed Comics

Women have been making comics since the medium’s very beginning, but there’s an important story that hasn’t yet been told: how women changed free expression in comics. Comic Book Legal Defense Fund will tell that story in SHE CHANGED COMICS, a full-color, 160-page book coming out this October 2016 from Image Comics.

SHE CHANGED COMICS was a runaway success on Kickstarter last month, where backers funded the project in eight hours and supported several stretch goals, including teaching guides for middle school, high school, and higher education, as well as a nationwide teaching tour.

Covering female comics creators from the turn of the 20th century to present day, SHE CHANGED COMICS will profile more than 60 women who transformed the landscape of free expression and expanded the comics artform. It will also examine the plights of women who have been persecuted for expressing themselves through cartoons and feature interviews with some of the most influential women working in comics today. The book will be illustrated throughout, with a professional index and links to additional resources, making it invaluable for educators and fans alike.

“More women are reading and making comics, and we want to explore the women who laid the groundwork for this transition in She Changed Comics,” said Betsy Gomez, CBLDF Editorial Director and editor of She Changed Comics. “These are women who opened the door, ventured into new creative terrains, and radically changed the face of free expression in the process. She Changed Comics will be an invaluable tool in CBLDF’s ongoing mission to educate people about the value of comics as art and literature.”

“As an education professional and longtime advocate for the contributions women have made to comics, I regard this book as essential,” said Katherine Keller, Sequential Tart co-founder and CBLDF Board Member. “She Changed Comics has an important place in classrooms and libraries, and belongs in the backpack of any young person discovering their place as a reader or creator in this incredible medium.”

“We’re thrilled to partner with Image to distribute this book to the widest possible range of readers,” said Christina Merkler, CBLDF Board Member and www.DCBService.com partner. “We’re immensely grateful to all of the Kickstarter backers who funded the creation of the book and all of the incredible added material we had only dreamed was possible. Image’s efforts will allow us to get all of that extraordinary work out to the world in a much bigger way than we could do ourselves. We couldn’t be happier about their support!”

About SHE CHANGED COMICS:
SHE CHANGED COMICS celebrates the women who changed free expression in comics, with profiles of more than sixty groundbreaking female professionals and interviews with the women who are changing today’s medium, including RAINA TELGEMEIER, NOELLE STEVENSON, G. WILLOW WILSON, and more! SHE CHANGED COMICS also examines the plights of women imprisoned and threatened for making comics and explores the work of women whose work is being banned here in the United States. A must for readers of all ages, students, and educators.
ISBN: 978-1-63215-929-8, 14.99, 160 pp, FC. ABOUT COMIC BOOK LEGAL DEFENSE FUND (CBLDF)
Comic Book Legal Defense Fund is a non-profit organization protecting the freedom to read comics! Our work protects readers, creators, librarians, retailers, publishers, and educators who face the threat of censorship. We monitor legislation and challenge laws that would limit the First Amendment. We create resources that promote understanding of comics and the rights our community is guaranteed. Every day we publish news and information about censorship events as they happen. We are partners in the Kids’ Right to Read Project and Banned Books Week. Our expert legal team is available to respond to First Amendment emergencies at a moment’s notice. CBLDF is a lean organization that works hard to protect the rights on which our community depends. For more information, visit www.cbldf.org.