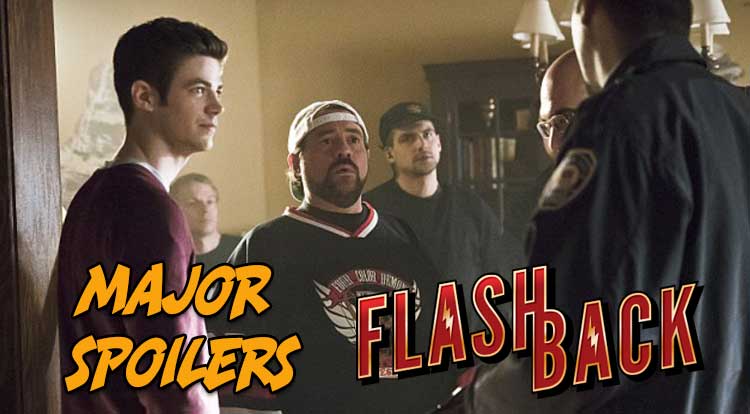 Barry is gone! Or is he? Flashback breaks down The Runaway Dinosaur and gives you the comic book history behind this week’s episode of The Flash.

Iris volunteers to act as the bait in a plan to trap Girder in S.T.A.R. Labs; Barry struggles to go back to his old life. This week, we really need to highlight two of the people behind the scenes. First up is scriptwriter Zack Stentz who brought this episode to life by giving everyone in the episode something wonderful to say. He’s also responsible for making half the viewing audience tear up during the scene between Barry and his mother.

While you may not know Zack Stentz’s name, you definitely know his work. Stentz wrote the screenplay for Thor, X-Men: First Class, and is listed as the writer for the upcoming Lore television show (based on the podcast), and the Power Rangers movie.  He also wrote four episode of Fringe, and Agent Cody Banks. With that pedigree, it’s no wonder this episode turned out great. It’s no secret that Fatman on Batman’s Kevin Smith was directing this episode. Smith made a name for himself way back 1994 with a little indie movie called Clerks, and he’s been all over pop culture ever since.  With a slew of podcasts under his SmodCo brand, acting appearances in everything from The Mindy Project and TMNT to Southland Tales and Degrassi: The Next Generation, and directing gigs as long as your arm, it’s no surprise he was asked to direct an episode of The Flash.

While Smith is best known for directing his own projects (Chasing Amy, Clerks, Red State, etc.), he has stepped up to direct projects written and produced by other people. If you have never seen the pilot episode of Reaper, you’re really missing out.  But when it comes to The Flash, it was never a question of “Does Kevin Smith know how to direct television,” as much as “What can Kevin Smith bring to the table?” This week’s episode answered that question and then some, and according to many, Smith reinvigorated everyone on the set to bring their best performances to the screen. Even Smith has said that the experience directing the episode gave him renewed energy as a director.

Smith did post a rather interesting tweet a few weeks ago, that implies he will be directing again next season, which has since been confirmed.

I honestly feel it was vice versa: @CW_TheFlash reinvigorated me! I can’t wait to go back and do it again in August! https://t.co/8AOC8ZHKz1

In case you are wondering how Kevin Smith ties to comics beyond his love for all things comic book and pop culture related, Smith has written issues of Daredevil, Spider-Man, Green Arrow, Batman, The Green Hornet, and The Bionic Man.

Always close by in nearly every project Smith is directing is Kevin’s best friend Jason Mewes. First appearing in Clerks, the foul mouthed “Jay” caught everyone’s attention as he added “Snooch to the nooch”, “snoogins” and “snoochie boochies” to the lexicon.

This week, Jason Mewes appeared in the episode twice – first as the man who got his mom’s Hummer wrecked by Girder, and then again in the closing shot, disguised as one of Zoom’s Team Bad Guys. Girder returns this week, and if you are going to have a throw away villain return as a zombie, Girder is probably the best character for it.

Girder originally appeared in “The Flash is Born” (S1-E6) as the villain of the week who has a mad crush on Iris West.

In Flash: Iron Heights (2001), by Geoff Johns and Ethan Van Sciver, Tony Woodward’s origin is revealed during a riot at the steel plant where he worked. Woodward thrown into a vat of molten steel, and later as a result of STAR Labs experiments, the metal scraps reform Tony’s body.  Of course the official investigation report states that Tony was involved in an “industrial accident.”

As an undead villain in the television episode, Girder doesn’t go around eating brains – though some have said this is a nod to iZombie – instead he looks and acts much like the undead heroes and villains that appeared in DC’s Blackest Night event that ran from 2009 – 2010.

“Blackest Night” is a 2009–2010 American comic book crossover storyline published by DC Comics, consisting of an eponymous, central miniseries written by Geoff Johns and penciled by Ivan Reis, and a number of tie-in books. “Blackest Night” involves Nekron, a personified force of death who reanimates deceased superheroes and seeks to eliminate all life and emotion from the universe. Geoff Johns has identified the series’ central theme as emotion. The crossover was published for eight months as a limited series and in both the Green Lantern and Green Lantern Corps comic titles. Various other limited series and tie-ins, including an audio drama from Darker Projects, were published. We did get to see Nora Allen’s gravestone this week, and while she did die young, the 1959 date is an interesting one, as that is the year the Silver Age Flash moved from Showcase Presents to his own Flash series beginning with issue #105 (to continue the numbering of the Golden Age Flash series).

We addressed this a bit in the last Flashback, but it is worth bringing it up again.

The Speed Force is an extra-dimensional energy that powers the Flash’s superhuman abilities. Nearly every speedster in the DCU has been able to tap into the Speed Force to gain their speed. Jay Garrick was able to get his powers from the god Mercury. If it helps, you can think of the Speed Force as The Force, an energy that is all around us, that few can tap into. Max Mercury, the Zen Master of Speed, was the first to study and understand its powers, and Bart Allen (aka Impulse) could control the Speed Force and commune with the spirits inside.

Yes. Spirits inside. When speedsters die, they become one with the Speed Force, and it becomes a kind of afterlife for the.

“In The Flash: Rebirth #4, Max Mercury revealed to Barry Allen that the Speed Force was created by Allen, himself, when he became the Silver Age Flash; adding that, “When [Allen runs, he generates] the kinetic wall between the present and the time barrier. It’s an electrical energy that exists in every dimension, every universe, and every era. It touches every part of reality. It contains the knowledge of every place and time. “

But have any speedster entered the Speed Force and returned in comics? Of course, Dear Reader, of course. In Flash #100, part of the Terminal Velocity arc, Kobra continues his attempt to take over the world.

Linda starts a direct attack on Kobra, but when he wants to get rid of her Wally suddenly rematerializes between them. He subdues Kobra and destroys the energy distributor – only to seemingly disappear in a blinding explosion again.

He does come back, of course, and by the end of the issue readers learn something that Wally and Linda already knew. “Linda … I made it through. I sped to the other side of light. I became part of some force … some power. It was … it was glorious,” says Wally. In other words, no matter where he is, Linda will be Wally’s anchor and he will always return to her.

That sounds an awful lot like the speech Barry says to Iris at the end of the episode.

By the way, Flash #100 was written by Mark Waid, a writer who contributed so much to the Flash mythos that we see time and time again in the television series. While the theme of The Runaway Dinosaur is one we see pop up time and time again in children’s books (there’s an Elmo book my kids loved that followed the same story telling technique), sadly, the Runaway Dinosaur is a book of fiction. The author of the book is Ethan Rhys Helbing. If the last name sounds familiar, then you probably know the executive producers and writers of the show, Aaron and Todd Helbing.

I don’t know if it was intentional or not, but in comics, artists have found ways to work the title of the issue into the panel on the page. The show where Barry wakes up in his room and we see the book in the foreground seems to be an homage to that technique.

This week, Barry doesn’t reveal his identity to anyone, but perhaps Iris let it slip to Wally when she said, “Barry is gone.” While we can’t officially put Wally on the list yet, I’m going to be he knows by the end of the season.