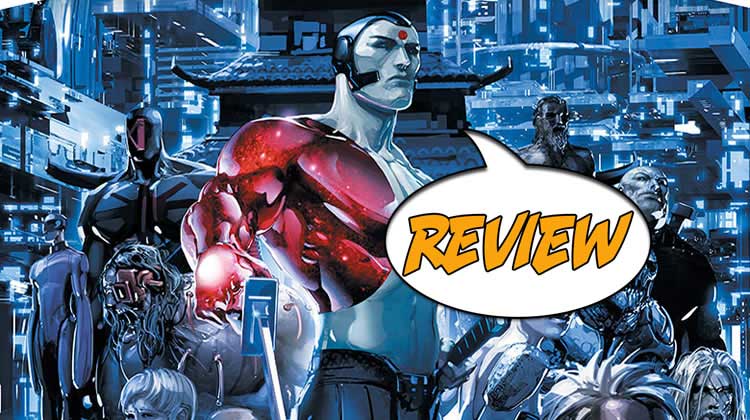 Matt Kindt can pitch curve balls like few others can, and I also admire his ability to make characters “real” to me. And he does all this while weaving tremendous sci-fi stories, too!

For the last couple of years, he’s been doing more and more for Valiant, a company I really like, so I’ve been enjoying his work on Unity, Ninjak and Rai.

The story of Rai is now continuing in 4001 A.D., and the debut issue has just hit the stands. To use the technical term, it’s a doozy!

Previously in 4001 A.D.: At the dawn of the 41st Century, Rai is about to inherit the dark truth behind the origin of his kind … and discover the sinister secret at the heart of Father’s existence. For New Japan to live, Earth must die … and as Rai challenges his former master for the first time in more than a millennium, the lone guardian of New Japan will be cast out of his own Father’s kingdom.

Exiled from the only realm he’s ever known, Rai now walks the ravaged world of 4001 A.D. in search of forgotten heroes like himself … on a mission to collect the last surviving legends of a broken planet … and to forge a rebellion with the power to bring the most advanced civilization in history crashing back down to Earth.

The future is a dark one for Rai, who’s shrouded in mystery. He’s a killing machine seriously tied to Japan’s history, but he’s been discovering that others know more about him than even he does. He needs to understand what his connections are to humanity.

Nothing is quite what it seems, and when he’s confronted by information that shakes his belief system, Rai has moved from enforcer to detective, new territory for him. Father, the machine in charge, is revealed to be a liar, and the world it has built may come crashing down around it.

Kindt has shifted Rai from being a completely assured assassin into a being on the verge of being unsure of itself, and it really makes me feel for the guy! We’ve all had supports taken away from us, but this change threatens to shatter him at his very core.

Even worse is the fact that at least two other people apparently know much more about him than he does himself. Talk about making someone insecure!

Kindt also makes the people around Rai believable, including the young girl who had led him into this mess, the long-lived Spylocke and multiple versions of a potential enemy who are cryptic at best. When she visits her family for the final time, it’s touching and scary at the same time.

I particularly enjoy that instead of “go to hell” in New Japan, they say “go to Earth.” That kind of phrasing makes us understand just how badly the residents of Japan think of their “home” world.

It’s a stunning sci-fi epic, with the sky literally falling down as things progress!

The art from Clayton Crain has a painted feel to it, and it just sparkles. Both expressions and action sequences are well done, so we get to see Kindt’s scripting come to life before our eyes.

The last few pages, where the biggest changes happen, are simply amazing! Rai must take on Father machine to machine, and the art is particularly well done! Wow!

BOTTOM LINE: A Good Time to Jump on Board

4001 A.D. is an epic search for truth that will certainly change both the main character and the world he’s charged to protect.

When you get to your local comics shop this week, you might see if the previous issues of Rai or any collected editions of this excellent book are available. They’ll help you better understand what’s going on. If they don’t have them, you can always access them digitally!

Valiant Entertainment does a wonderful job of telling profound yet personal stories, and this series is an ideal example. Highly recommended!