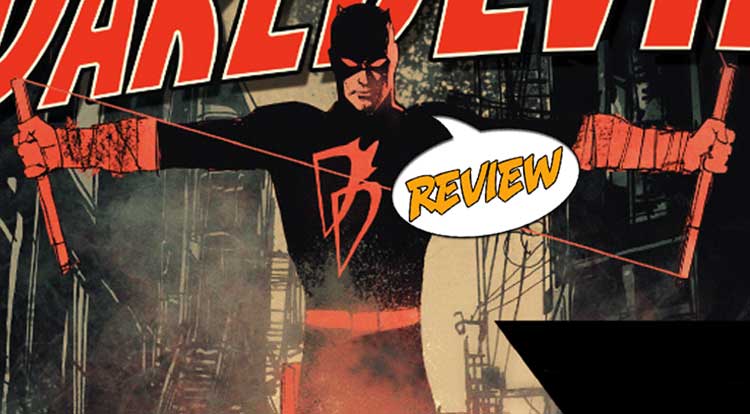 Reunions with your ex are always awkward. Previously in Daredevil: “In the months since his return to New York, former defense attorney Matt Murdock has not only become a prosecutor for the city of New York, he’s also somehow managed to regain his secret identity and erase any prior public knowledge that he is in fact Daredevil.  With a new lease on life (and the help of he protegé Blindspot) The Man Without Fear now protects his city with complete autonomy.  And while everything seems to be going well, the past has a way of catching up…”

ELEKTRA’S BACK, BUT WHAT DOES SHE WANT?

The issue opens with Daredevil in combat with Elektra, cutting away just as she hurls her sai at his face with clearly deadly intentions.  Cut back to a few days earlier, with Matt Murdock in court, prosecuting his latest case, while his enhanced senses suddenly realize that Elektra Natchios has entered the room, minus her ninja gear.  The issue is primarily character interaction, as Elektra tries to convince Matt to help her find the one thing she really wants: face-time with Daredevil.  Of course, there’s also the issue that (somehow) Matt has made even Elektra forget the secret of his double-identity, which leads to much internal hand-wringing about whether she’s angry for whatever manipulations he pulled.  In truth, her intentions are much more intense, as she seriously injures Blindspot, and savagely beats DD himself before finally snarling, “What have you done with my daughter?”

STILL NOT FEELIN’ THE NEW COSTUME

Though Ron Garney is absent this time around, Matteo Buffagni does an excellent job with the action, and even delivers a clearer take on Daredevil’s new primarily black uniform.  I’m still not thrilled about the major changes to the look, but I have to admit that it looks really good in action against Elektra, and I find it quite amusing that his Matt Murdock resembles the TV version in this issue’s courtroom sequences.  The final page cliffhanger is a startling shot, and one that packs its punch not just because of the shock of her line, but in the body language and facial expression Buffagni gives Elektra.  The limited color palette is still in play here, with an emphasis on shadows and reds, which gives the adventure an unearthly quality that really makes a ninja fist fight in the rain sing…

THE BOTTOM LINE: ONE HECK OF A CLIFFHANGER

All in all, I’m not sure at all what’s going on here, but I certainly want to see more, and I like the fact that this issue gives us a lot of play on the extended history between Matt and Elektra without falling into the traps some previous arcs have.  Daredevil #6 makes a fresh story out of some of the most familiar DD elements, with excellent art and some very nice character work for Matt Murdock, earning a better-than-average 3.5 out of 5 stars overall.  I’ll definitely be back for next issue, as well…

Strong drama, well-delineated action sequences and a real shocker of a last page make for a solid issue...