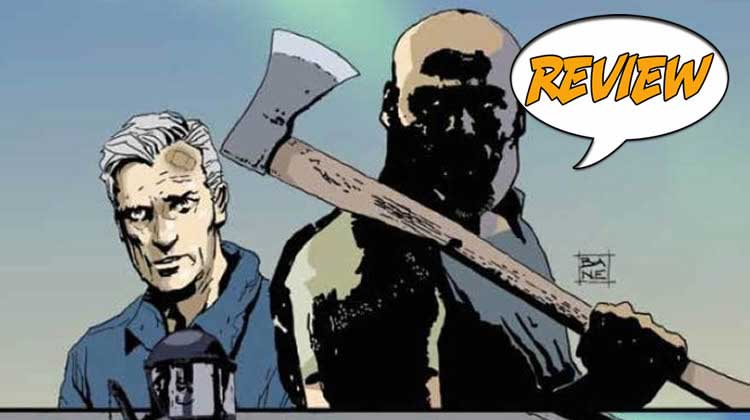 Solar Flare #5 is another excellent example of how a team of comics creators can keep one at the edge of his or her seat from issue to issue. Take the jump for a review of the issue!

Previously in SOLAR FLARE: With plans in place, Jake and friends begin to prep for their long journey. Will they make it out of town, and who will be leading the way?

Before we get too far, here’s the official description of the book: “This series is about a group of people brought together after the world’s worst solar flare disaster, which leaves everyone with little to no electronics (similar to an electric magnetic pulse). The solar flare disaster acts as a backdrop for a story that highlights the human enigma via complex characters that blur the lines between right and wrong. It is not only the plot line, but the relationships and character development that keep the reader entrenched in the story. The primary goal is for the group of main characters to travel safely (in a world with no functioning modern transportation) from Florida to Tennessee to deliver valuable information to the government that will save millions of lives.”

I first came across Solar Flare at last year’s Megacon Fan Days convention held in November in Orlando, Florida. I met the creator at his booth there and purchased the initial issues. I went back to the other booth I was helping with and started to read. I loved it! I immediately returned to James’ booth and asked him for an interview for my podcast, which you can hear at this link.

Like early issues of Gardner Fox’s Justice League of America, Solar Flare actually teaches us some science! What a concept! We learn about what a solar flare really is, and what it truly could do. Mr. Haick has also put together a Solar Flare Preparation Guide, chock full of “information that could save your life.” It’s supposedly written by one of the book’s characters, Dr. Jerry Wilman. One of my favorite parts is the fact that vehicles without a computer chip in them, mostly built prior to 1970, still work after the solar flare, so they’re now extremely valuable!

The characters are strong and realistic, portraying individuals all over the political spectrum and all walks of life. From the first page, I was completely fascinated by the situation we find ourselves in as well as the people we meet.

The pacing is great, unfolding the story slowly, but not too much slowly. In the current issue, for example, we start off by learning the history of one of the minor characters. He’s done some bad things in his life, as we discover. But he’s helping Jake Clifford, the main person the story follows, to make positive things happen. He may have changed some in the years since the prelude took place!

That’s one of the great things about the book – character development! Some people are growing while others are losing ground. Even Senator Bowman, who we haven’t seen in real time yet, is fascinating in that he wants to keep things down so he can rise up and take over. There just might be a politician or two around today who could be the inspiration for the senator!

There’s also conflict among the people since not everyone wants to proceed in the same way. The discussions are intriguing and done excellently because we learn about the people through their words and, at times, their actions.

I’m really interested in learning more about a “ninja guard” who’s protecting the store Jake’s family owned. He plays an important part in this issue, showing that a disaster like the solar flare can bring out the best in some people. Like that! On the other side is Jake’s uncle, who’s actually working against the others by supporting Senator Bowman. Things can’t end well for him!

Each story arc is named for the city involved with that tale, such as Fort Myers, where the story begins.

Without power, the world is a very dark place, of course. The art by Jovanovic and colors by Ye do a powerful job of helping us feel that while still portraying what’s going on very well. When I first heard the book’s concept, this was a big concern of mine. I needn’t have worried! I get the sense of what’s happening and understand what’s taking place very clearly!

The creation of the characters’ expressions and the clothes they wear really help us keep track of who’s who, which I truly appreciated! I mean, I dropped right into this world once I started reading the first issue, and I think it’s somehow only gotten better since then!

Another cool aspect of the comic is that the covers are an artist’s portrayal of what solar flares look like. There are alternate covers focusing on the book’s characters available as well!

THE BOTTOM LINE: No Power to the People!

I’m really big on this comic because I can imagine my life without the power I depend on, and it likely wouldn’t be very much fun!

You can learn more about this comic by checking out the book’s website here. There’s a great video there that will answer many questions you may have about the series or its concept, and you can find it at this location. If you have any other concerns, you can email James here.

To purchase paper copies of Solar Flare, you can catch up with James at many comics conventions, as I did. There’s also a store at the website where you can obtain all the issues now available. Also, you can go to comixology.com to purchase digital versions.

I hear that the series, which is currently being self-published, may find a publisher soon, so I’d return to the book’s website regularly for the latest news! If you enjoy a well-told story like I do, you’ll be anxiously awaiting issue #6 just like me! Highly recommended!

I’m really big on this Solar Flare comic because I can imagine my life without the power I depend on, and it likely wouldn’t be very much fun!