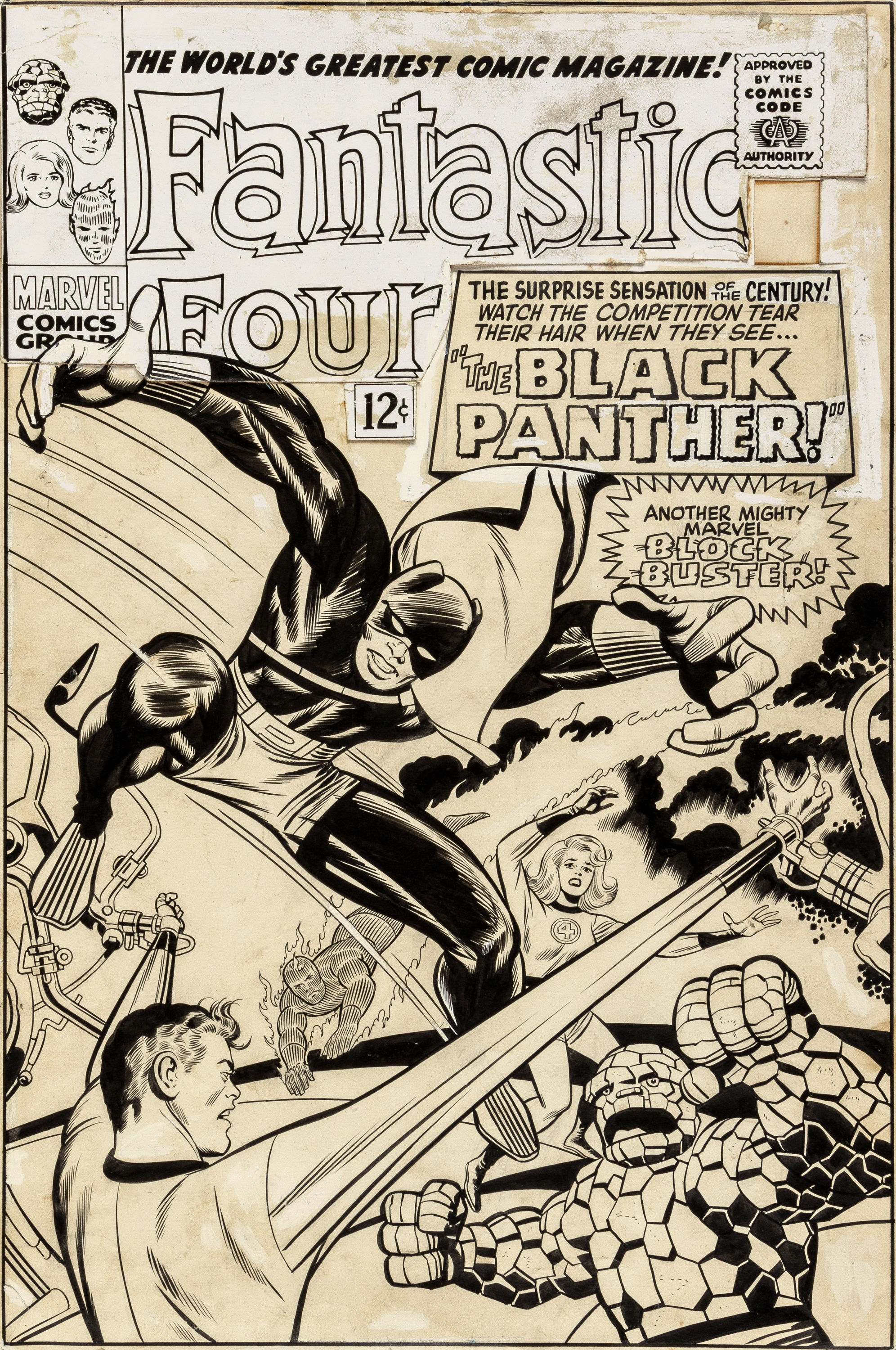 The first appearance of Black Panther by Jack Kirby, original Peanuts strips, and an ultra rare Bill Watterson Calvin and Hobbes strip from 1987 hit the auction block in May.

Heritage Auction revealed many of the pieces in the May 13-14th auction, and if I had the $90,000+ to grab that Calvin and Hobbes piece, I certainly would making a bid. Perhaps the most socially significant piece of art in the auction is Jack Kirby and Joe Sinnott’s unused 1966 Fantastic Four #52 original cover art, featuring the first appearance of Black Panther, the first black superhero in mainstream comics. While Marvel ultimately went a different direction than this cover, it still carries significant weight given the character that it features, his recent high profile re-launching and his upcoming appearance in film. It carries a pre-auction estimate of $80,000+.

Gil Kane and Dave Cockrum provide another classic piece of original comic art in the form of the cover to 1975’s X-Men #95, only the third regular comic cover featuring the new X-Men and the only one to feature the ill-fated character Thunderbird, who would meet his demise in the issue. It is estimated at $100,000+. Another piece of spectacular original Marvel cover art up for bid is John Romita, Sr.’s 1973 Defenders #10 Cover Thor vs Hulk Original Art and Cover Proof, long considered one of the great superhero battle covers ever inked (estimate: $50,000+). A true masterpiece of modern comic strip art, Charles Schulz’s original Peanuts Sunday Comic Strip Art, from Aug. 8, 1953 (estimate: $50,000+) – a very early strip in the series that clearly shows Schulz’s burgeoning mastery of both pen and story – features a classic final panel to make it one of the best original Peanuts examples to ever surface for auction. Bookending the original comic strip art is an incredibly rare original Bill Watterson Calvin and Hobbes daily comic strip from Nov. 14, 1987 (estimate: $50,000+), one of just a handful of original Calvin and Hobbes strips to ever surface for auction.

Though I bag on how awful Peanuts became in the mid-70s forward, I love Sparky’s original character designs and humor, and the strip on the auction block is definitely one of my favorite gags. If you are hoping to put your kids through college by collecting and then reselling comic books, your kids will have enough to go to city community college, but if you want to send them to an Ivy League school, you’ll need to start collecting original art now and hope the artist or character interest skyrockets. Greg Capullo and others routinely sell original art online, and even though you may be paying $5,000 now, in ten years, that investment will pay off nicely.

You can find out more about the Heritage Auction at the auction house website, and if you can afford to bid on these auctions, you should probably become a Major Spoilers VIP Gold Sponsor.