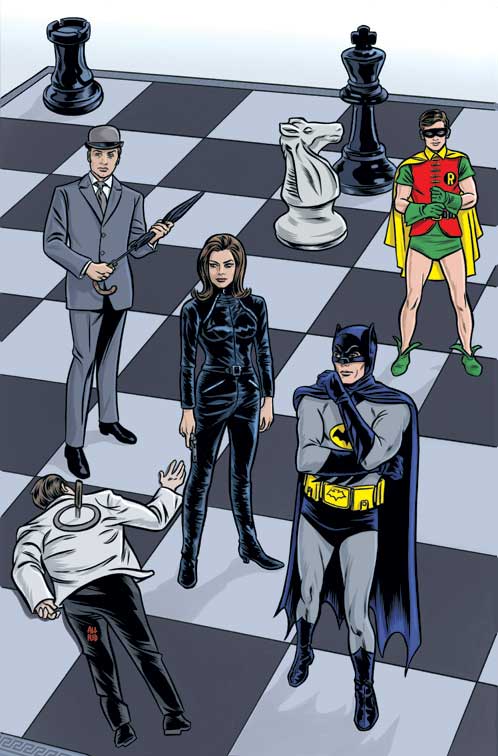 Batman ’66 has already teamed with Green Hornet, and now the caped crusader is teaming with the Avengers. No, not THOSE Avengers, but rather Steed and Mrs. Peel, and it’s happening in June!

Batman ’66 Meets Steed and Mrs. Peel will be a twelve chapter bi-weekly tale that will debut in digital form first, before getting a six-issue print series. The series will be written by Ian Edginton with art by Matthew Dow Smith. BATMAN 66’ MEETS STEED AND MRS. PEEL
Rated E for Everyone
Writer: Ian Edginton
Artist: Matthew Dow Smith
Cover Artist: Michael Allred
As Bruce Wayne shows the beautiful head of a UK electronics company the sights of Gotham, they are interrupted by the felonious feline Catwoman! Unwilling to leave Miss Michaela Gough unprotected, Bruce resigns himself to the fact that Batman cannot save the day. But some new players have arrived in town – though even as the lovely, catsuit-clad Mrs. Peel and her comrade John Steed take control of the situation, nefarious plots continue apace!

I know of at least one person who is jumping up and down and squealing for joy as his three favorite characters finally come together for the first time.