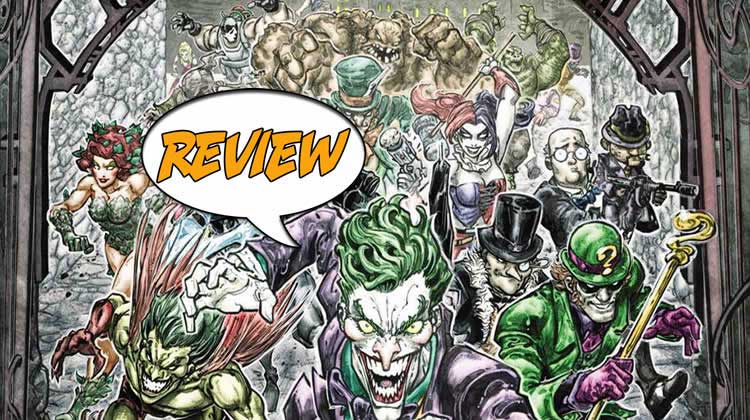 I love crossovers! I mean, Star Trek and anything else sci fi? I’m there! Flash and Supergirl on CBS? Loved it! But, when I heard about Batman teaming up with the Teenage Mutant Ninja Turtles, I was skeptical. VERY skeptical.

After all, it’s the Dark Knight working with what is often considered a kids franchise. I mean, talking turtles and Batman? I wasn’t all that enthusiastic about it.

However, I’ve grown to be a big fan of James Tynion IV, who can turn a great tale with the best of them. So I signed up for them.

And I’m glad I did! I’ve been enjoying what I thought were franchises that couldn’t integrate become really fascinating! This week, the penultimate book was released, so here are my thoughts on it!

Previously in BATMAN TEENAGE MUTANT NINJA TURTLES: While Shredder enters an uneasy alliance with a deadly new partner, Casey Jones is arrested by the GCPD. At the same time, a crisis breaks out at Arkham Asylum, which is bound to keep both Batman and the Turtles busy. Meanwhile, a certain young resident of Wayne Manor returns home to find a new, green occupant in his room. Co-published with IDW.

One of the things that Mr. Tynion has been working on is showing us just how similar these two franchises are while being as different as night and day.

Both Batman and the Turtles are mostly creatures of the night. They also face some of the weirdest enemies in comics, and have done so for decades. They also are great at hand-to-hand combat, and are mysteries to the rest of the worlds they live in.

The thing that makes them most different from each other is the fact that one is human while the others are mutated animals. Yeah, that’s different! Also, the Turtles tend to be much more exuberant, while Batman is very much subdued.

Mr. Tynion has spent a lot of these initial five issues comparing them, giving us reasons to enjoy this teaming. And I have enjoyed it!

When Shredder ends up in Batman’s Gotham City, it doesn’t take long for him to accept whatever help he can get, including the Turtles. It’s also been fun to see how members of the Bat-family react to the TMNT, including in this issue, Damien Wayne coming across them in the Batcave, then trying to take them on.

I have to give Mr. Tynion credit – the characterizations of all involved are true to how they’ve behaved in the past. He also moves the issues along at a good clip, and even when there’s discussion among the various participants, it’s not long-winded or slow. Like that!

Also, I liked the pretty good cliffhanger at the end of this issue! No way I’m going to spoil it here, but you really need to get this book to read it!

Be it action or character moments, I really liked the artwork by Mr. Williams. It effortlessly moves from fun to serious, action to drama.

My only concern was the lack of shadows in the art. I know this matches the TMNT style more than Batman, but since they are working at night a lot, I would have preferred dark shadows obscuring things more than panels that made everything going on very obvious. Oh, well – it was still great illustration!

THE BOTTOM LINE: THE CONCLUSION NEXT MONTH!

Tynion makes it seem that one of the heroic forces is not to be involved in what they’re calling an “epic” finale. Of course, we all know better! Everybody and their brother and sister will be in that conclusion, and I’m anxious to see it!

I’ve been really concerned about Tynion’s upcoming new take on Detective Comics, what with bringing in Clayface and all. This miniseries has relieved some of those fears. It’ll be fascinating to see what happens there … as well as the final issue of this story!

This story has helped me be more open-minded when it comes to mixing and matching the odder pairings in comics. This has worked, and worked well, I think. Could Batman team up with the Pet Avengers next? Nahhhhhhhh.

Still, it’s proof that, given the right creators, comics can make just about ANYTHING happen, and be a great read! Now, how about pizza for dinner tonight?

I never thought this team-up would work, but it does!