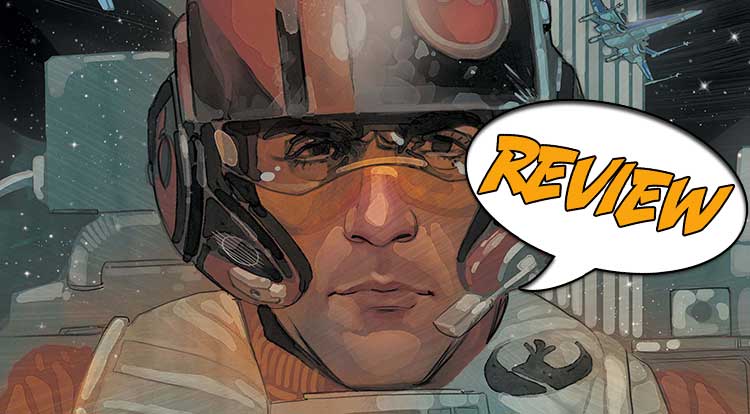 Thirty years have passed since the defeat of the evil Galactic Empire, but threats of turmoil are rising. What role will Poe Dameron play in keeping the galaxy safe? Find out in your Major Spoilers review of Poe Dameron #1! A SHORT TIME AGO…

This book opens up with Poe Dameron doing some of his fancy flying in tight quarters. As the place starts to come down on him, we’re treated to a flashback of General Leia Organa giving Poe the mission to find Lor San Tekka, who just might have the key to finding Luke Skywalker. Poe assembles Black Squadron, and we cut back to the action as Poe narrowly escapes destruction and winds up in a subterranean village of people who protect and worship a big blue egg. Though they may have information on Poe’s target, they are hesitant to trust him. However, an alliance may have to be formed quickly as the First Order arrives.

To be upfront, I am not the world’s biggest fan of prequel stories in general. If it features a character we know, then we know how it ends for them. If there are characters who were not in the original story, then they either have to die off or fade into obscurity. You can’t shake up things too much, because stuff is already established. On the surface, Poe Dameron seems like the worst offender because this book leads right to the very beginning of Star Wars Episode VII and many of the characters introduced are in the film as well. The advantage that this book has is that it takes place in the Star Wars universe, which is vast and strange and full of some wonderful things. While things may be railroaded, we do get some very interesting ideas introduced. The blue space egg and its worshippers are so intriguing that I hope we get more about them before moving on too quickly. Charles Soule manages to establish that there is a lot to these people in a very short amount of time, and a lived in world is easier to get invested in to.

One of the bigger shortcomings of this book is the supporting cast. We have such a short amount of time to meet the other members of Black Squadron that some of the dialogue for them feels very uneven. At times it works, but there are others where it feels unnatural. I recognized one of the characters from Shattered Empire, but I would hate for this book to rely on people having dug in to that for characterization and alienate the new readers. Adding in the blue space egg people and then the arrival of the First Order makes it feel like this book is about to get very crowded. Since we don’t know the fate of all the members of Black Squadron in The Force Awakens, I hope they can make us care enough that we want them to still be kicking around somewhere in this galaxy far, far away. Poe himself is still cool and charming, working his way to being the new Han Solo. Not much depth is added to him yet.

…IN A GALAXY FAR FAR AWAY

Phil Noto is pulling off some great art here. The more technical aspects, like the weapons or the ships, look just like they should and they blend in with the world around them. The action is clear and easy to follow, and it manages to be rather exciting. However, there are times where Oscar Isaac’s beautiful face feels unnaturally out of place on the panels, as if someone took a photo and edited it to fit in. I don’t imagine it is easy to take a real person’s visage and make it always fit naturally. Most of the time, it’s pulled off fine, but a few panels made me pause. Aside from those, everything else feels natural and blends the realism seamlessly with the fantastic.

The backup story from Chris Eliopoulos and Jordie Bellaire which features a matchmaking BB-8 brings an element of light hearted fun to the more serious book. With a Bill Watterson inspired style, this cute little story will win over the hearts of anyone who reads it. What it really manages to do well is fit in to the Star Wars world without feeling ridiculous or silly. If there was ever going to be a Star Wars comic strip in the paper, then this is what you, or your kids, would want to find each day.

THE BOTTOM LINE: LET’S SEE WHERE THIS GOES

Even though we know where we’re going, the path seems like it will be a fun one to take. There’s a lot here to explore, and a lot of characters that people may already be familiar with to flesh out. Phil Noto is really giving a lot in the art, and there’s few others I would want ready to take on the coming action. I wasn’t overwhelmed by this first outing, but I am curious enough to stay on and see what the next chapter brings. People who were disappointed by some of the Journey to the Force Awakens books will likely find more here that they want to sink their teeth in to.

A solid opening to what appears to be a good entry in the Star Wars universe, but it is not without its faults