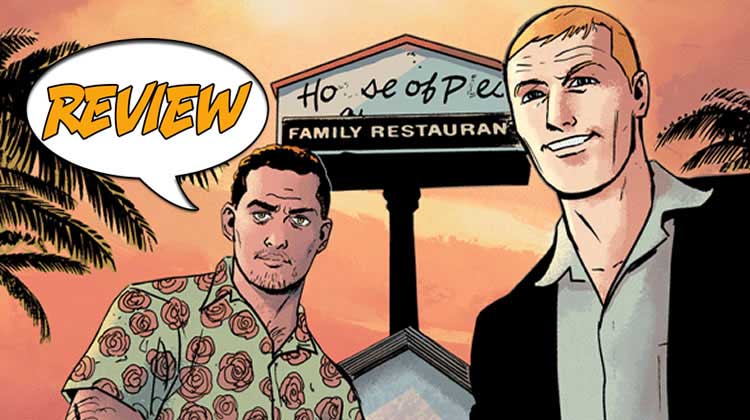 Being an anti-hero has a lot of appeal to many today. After all, the politicians are crooked, the system’s rigged against us, the cops are no good … all that good stuff.

Most comics deal with the good guys, so it makes sense to have Nick Spencer, who also writes – count ‘em – TWO Captain America titles to want to go a different route. Hence The Fix.

Previously in THE FIX: From the creators of The Superior Foes of Spider-Man, comes a story of the crooked cops, scheming mobsters, and corrupt politicians that run things—and the sex toy that can bring them all down. Oh, and the hero is a drug-sniffing beagle named Pretzels. Bad people do bad things to each other in this frenetic, outrageous, sometimes off-putting new caper! If you liked classic crime comics like CRIMINAL and 100 Bullets we apologize in advance for letting you down!

GETTING INTO THEIR HEADS

One of the things that Mr. Spencer is good it is helping us understand the motivations of the characters in his books. Some people think he spends too much time doing that and should focus more on action, but it’s what he does.

Much of this issue is spent learning why at least one of the guys cheers for the bad guys while being a cop. The villains are always portrayed as more dashing, more crazy, more courageous, anti-heroes who make the good guys look square and boring. I understand the reasoning more, though I hardly agree with it.

In The Fix, the focus is on two crooked cops – Mac and Roy – who are in search of “the good life.” They want money, and lots of it, and they see being police officers as means to accomplishing this goal.

The bad news for criminals, as the book points out, is that modern technology makes it tough to be a thief. You have to understand computers in order to make REAL money, which these two don’t. They even have to resort to stealing cash from a resident in a senior citizens’ home in order to pull “their” kind of job.

Honestly, it seems everyone’s on the take. Even the Internal Affairs agent must be!

The story focuses on these two as they have to try to maintain a good image while having to make heists that can blow their cover. The last few pages, the two meet with “The Boss” who wants something smuggled into LAX airport.

Sadly for the cops, there’s a huge obstacle to their plans – Pretzels the dog. He can’t be bought or persuaded, and he’s sniffed out mountains of contraband in his career. How will Roy and Mac get around this? That’ll begin to unfold next issue, of course!

The writing is dialogue-heavy, which is how Mr. Spencer often tells his tales. There’s a lot going on, but not much in the way of action. It’s much more drama. Keeping things happening as far as all kinds of chicanery moves things along pretty well, though. You’ll also encounter movie producer Donovan, the Jizzmotron, and Abe Stinson, but you should read the book to find out more about each of them.

Interestingly enough, in the credits inside the comic, Mr. Lieber’s name comes first. Not many books list the artist above the writer.

The art is clear and the colors bright, something of a contrast to the story, though. We understand the feelings and actions of the characters very well. Just a couple of shadows would have been nice to see, though.

THE BOTTOM LINE: The Opposite of Captain America

I should point out that this book is NOT for the kiddies, full of F-bombs and sexual situations. I imagine the basic plot would drive most with kids away, though.

Things don’t always go their way, but I’m hoping in the future that Mac and Roy get into trouble once in a while. I guess seeing the bad guys win every once in a while is good reading, but if they win ALL the time, I’ll get disturbed.

If you like darker cop stories, this book will be a pleasure for you. If not, you might instead choose either or both of the Captain America titles Spencer is currently writing. If you like Mr. Spencer’s writing style, you’ll also like this title. Me, I’m going to read on for a while and see if I continue to cheer against the main characters. Until then, I’m in!