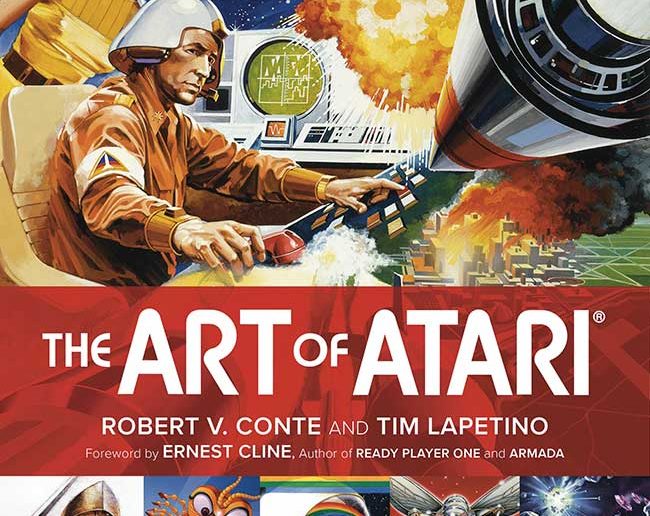 The popularity of video games has reached an all-time high, with modern releases boasting production budgets bigger than most Hollywood films, and grossing far beyond even the biggest box office smash! Now, Dynamite Entertainment returns to the roots of gaming with The Art of Atari!

From the arcade to the living room, Atari is one of the most recognized names in the world. Since its formation in 1972, the company pioneered hundreds of now classic titles including Asteroids, Centipede, and Missile Command. The Art of Atari is the first official collection of original artwork created for arcades, home video systems, and computers, commissioned to enhance the Atari experience and further entice children and adults to embrace and enjoy the new era of electronic entertainment. Sourced from private collections and museums worldwide, this book spans over 40 years of the company’s unique illustrations used in packaging, advertisements, catalogs, and more.

The Art of Atari represents the most comprehensive retrospective to date, clocking in at over 350 pages, and collecting production and concept artwork, photos, and marketing materials. Fans can glean exclusive insight from key people involved in Atari’s rich history, with behind-the-scenes details on how the most iconic games in early video game history were conceived, illustrated, and developed! 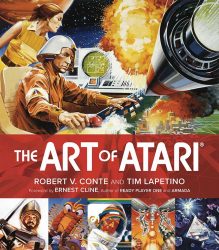 The Art of Atari features an exclusive foreword by New York Times bestseller Ernest Cline, author of Ready Player One, soon to be a motion picture directed by Steven Spielberg. Whether you’re a fan, collector, or new to the world of Atari, this book offers the most complete collection of artwork ever produced!

“Atari is remembered as the pioneer of video games — creating fun, innovative classics like Missile Command, Asteroids, Centipede, and more. But the company was much more than that,” says Tim Lapetino, co-author and Executive Director of the Museum of Video Game Art. “Atari’s creative culture set the standard for Silicon Valley startups, while its art and design-driven approach yielded an amazing body of work in illustration, graphic design, and industrial design.”

“Atari spearheaded a transformation of an entire generation’s consciousness,” says pop-culture consultant, Robert V. Conte.  “As comic books changed the face of American entertainment in the 1930s and 1940s, video games did something more in the 1970s and 1980s. Starting with Pong, the company changed our world forever.”

“This book collaboration with a recognized giant in the publishing industry is important because it showcases the quality and appeal of our brand and our intellectual property rights worldwide,” says Todd Shallbetter, COO of Atari. “We are excited for this book of our rich, iconic history to be added to the collection of our many devoted fans, both new and existing.”

“In the last few years, we have seen video game art books top the New York Times and Amazon bestseller lists,” says Dynamite CEO/Publisher, Nick Barrucci. “We have been granted the chance to publish the most essential book yet, highlighting the video game publisher that started it all: Atari! Like everyone, I have fond memories of not only the games themselves, but the incredible art on the cartridges. This is truly a historic moment for Dynamite, as we get to share the history behind one of the most iconic brands in the world!”

“This is a project that I personally have invested a lot of time in, so it’s been really gratifying to see it start to come together. The team creating the book is really doing an outstanding job in terms of both content and design” says Rich Young, Dynamite Director of Business Development. “There are pieces of art I’d seen before that I’d forgotten about, but when I see them now in this book, I remember seeing them for the first time, and it brings up some fond memories of discovering these video games back in the day. The art they had created was very iconic and helped further spur your imagination on when actually playing the games.”

Lapetino concludes, “The artwork of Atari inspired a generation and created a bridge from the simple on-screen graphics of those early games, to the imaginations of eager gamers. Atari’s creative efforts became the template that an eventual multi-billion dollar industry would follow.”

For updates, preview art, and details on upcoming editions, visit www.artofatari.com, and look for The Art of Atari when it arrives in a premium 9.625″ x 11″ hardcover format at fine retailers everywhere in October, with a retail price of $39.99!

Atari (www.atari.com) is an interactive entertainment production company. As an iconic brand that transcends generations and audiences, the company is globally recognized for its multi-platform, interactive entertainment and licensed products. Atari owns and/or manages a portfolio of more than 200 games and franchises, including world-renowned brands like Asteroids®, Centipede®, Missile Command®, Pong®, Test Drive®, and RollerCoaster Tycoon®. Atari has offices in New York and Paris.