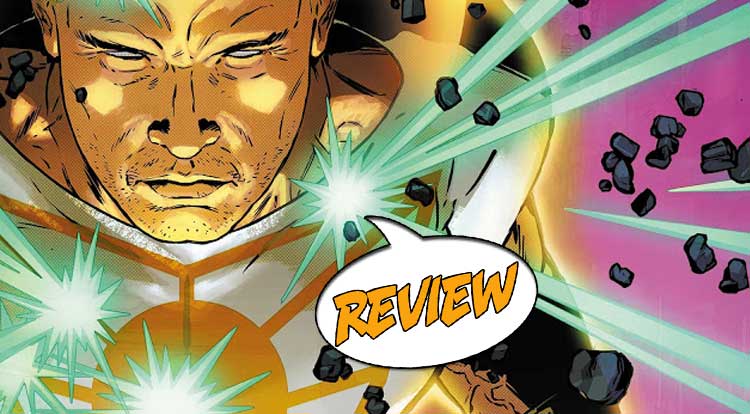 A Wildstorm power couple is reunited, but how will Midnighter deal with the return of his ex?  And is Apollo his only hope of survival?  Your Major Spoilers review of Midnighter #11 awaits! Previously in Midnighter:  “At last, it’s the moment we’ve all been waiting for: Apollo returns!  Midnighter’s caught in the crossfire between the Suicide Squad and Spyral- now he must team up with his ex to stop Henry Bendix from creating a monster! ”

Last issue ended with the Midnighter moments from death at the hands of Amanda Waller’s Suicide Squad, about to be annihilated by a massive explosion.  This issue opens with him lying in bed in Opal City, his enhanced senses slowly revealing that he’s in a familiar place: his former lover/partner Apollo’s place.  “You called me.  Remember?”  Things quickly go from bad to worse, as Midnighter takes Apollo back to see his Spyral handler, Helena, and discovers that Waller and Henry Bendix got the material the needed to create Henry’s newest superhuman weapon, a creature known as The Unified.  After his beating at the hand of a psychic Suicide Squadder last month, Midnighter has to change his tactics a little (a very cool sequence of action), with Apollo providing important backup to handle the rest of the Suicide Squad and Bendix’s other machinations.  As the issue ends, Apollo and Midnighter are face to face with The Unified, the only thing keeping it/him from destroying the country of Modora (something that Bendix intends to make a statement to anyone who would stand against him.)

BAD BENDIX IS ALWAYS A HOOT

Crazy Henry Bendix, as seen in ‘Stormwatch’ and ‘The Authority’, is a wonderful character, and this issue gives us the best mad jerkface Henry since Warren Ellis wrote him 20 years ago.  Manipulating the government, Amanda Waller and all the superhumans on the board (as well as mocking Lex Luthor as overrated), Bendix is great here, and Steve Orlando’s plotting really builds the threat in this issue.  The opening pages are wonderful as well, with a cautious Apollo dealing with the man who left him, and their quiet conversation about what happened and how Midnighter feels and felt about it is incredibly affecting for me as a reader.  The art is good as well, reminding me a bit of Bryan Hitch (in the good way) while having its own voice.  Hugo Petrus does a really impressive job with the return battle between Midnighter and Afterthought, showing us every single hit, then slowly shifting the perspective to reveal what’s really happening, and the final page splash of our heroes ready to combat The Unified is great.

I have been drifting in and out of the latest volume of Midnighter, but based on this issue, I am going to have to go back and read them in order, as Orlando gives us a really nice take on the hero-who-is-clearly-not-Batman-in-love-with-his-clearly-not-Superman.  Midnighter #11 features a really skillful streamlining Wildstorm and DC history into a form that works, with really great dialogue and above-average art, for a more-than-impressive 4 out of 5 stars overall.

An excellent streamlining of Wildstorm and pre-Flashpoint DCU histories, with very good dialogue and action sequences. An enjoyable book...